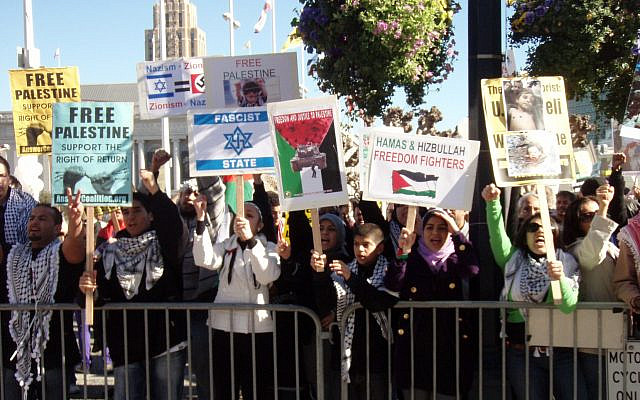 A few days ago, the Canadian government cut funding to a so-called anti-racism group after it was revealed that one member of the group had posted antisemitic material on social media.

The member in question, Laith Marouf, a “senior consultant”, had tweeted, “You know all those loud mouthed bags of human feces, aka the Jewish White Supremacists; when we liberate Palestine and they have to go back to where they come from, they will return to being low voiced bitches of [their] Christian/Secular White Supremacist Masters.”

One might assume that someone who receives government funding would be more discrete or would disguise his antisemitism into something that at least sounds like legitimate criticism of Israel. But the reality is that pro-Palestinian posts and comments on social media rarely disguise their antisemitism because there is little incentive to do so.

Moderators act only against very blatant antisemitic posts, and even then, not always. Posts that praise terrorists who have killed Israelis are typically not seen by them as contravening the rules, even after many people report the posts. Consequently, anti-Israel activists feel very comfortable posting hateful material.

Criticizing terrorists is in fact more dangerous on social media than praising them. Senior UN official Sarah Muscroft was recently demoted for tweeting, “Relieved to see a ceasefire agreed ending hostilities impacting both Palestinians and Israeli civilians. Such indiscriminate rocket fire of Islamic Jihad provoking Israeli retaliation is condemned. The safety of all civilians is paramount — the ceasefire must be upheld.”

In May 2021, then Canada’s Green Party leader Annamie Paul was vilified on social media by vocal members of her party for not taking the side of Hamas against Israel. From that point on, Paul had to fight to retain her position as leader, and she finally resigned in November of the same year. Paul, who is both black and Jewish, described her time as leader as “the worst period in my life”.

In other words, pro-Palestinian advocacy is centered on an antisemitic lie. No one who has even a basic knowledge of Jewish history can honestly claim that Jews belong more in Europe which committed the Holocaust in an attempt to destroy the Jewish people than they belong on the land of Israel where they have over 3000 years of history, a far longer history than the Palestinians have on the same land. And we all know that there has never been an independent Palestinian state, and that when one was offered to the Palestinians in the 1947 UN partition plan and in later negotiations with Israel, they turned it down.

To gain credibility among pro-Palestinian advocates, one must accept that antisemitic lie, a lie upon which all pro-Palestinian rhetoric is built. One must support any and all forms of violence against Israel as legitimate “resistance against the occupation”, with the “occupation” covering not only the West Bank but all of Israel.

Palestinian President Mahmood Abbas’ blatant lie that Israel had committed “50 holocausts” was so shocking to German Chancellor Olaf Scholz that it left him speechless. Consequently, one must have to assume that Scholz has not read some of the typical pro-Palestinian rhetoric on social media, because if he did, he would not have been surprised by Abbas’ words.