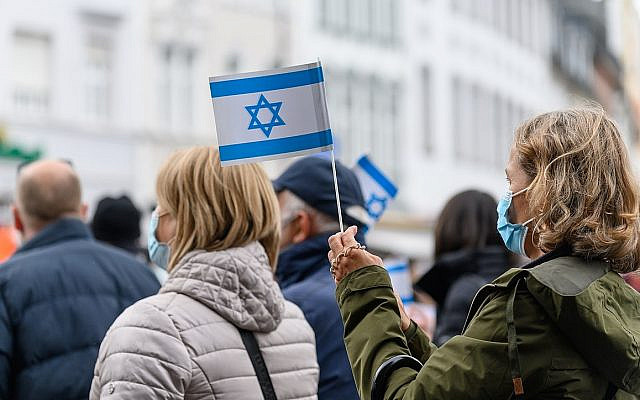 A rally in Germany in May 2021, during an Israel-Gaza war, in solidarity with Israel (credit: Jan Maximilian Gerlach / Wikimedia Commons).

In the Israel-Palestinian conflict, there are maximalist people on both sides: the people who want all of Israel/Palestine and don’t acknowledge that the other side has any legitimate rights over the land. But this is where the symmetry ends. Despite the maximalists among them, the Israelis have repeatedly agreed to settle for much less than everything, but the Palestinians have never agreed to settle for anything less than everything, leaving the Palestinians with practically nothing and leaving Israel with practically everything.

It is easy to jump to the simplistic conclusion that since the Palestinians have so little and Israel has so much, Israel must be at fault, but it is the wrong conclusion.

The deeply engrained problem of the Palestinians is that they have convinced themselves so much of the narrative that they constructed that they are completely incapable of deviating from it. As I showed in a previous post, even the most peace-oriented Palestinians cannot get themselves to settle for anything less than everything.

The problem with that narrative is that there isn’t much in it that resembles reality.

The Jews have millennia of history on the land of Israel, far longer than Palestinian history. There has never been, at any time in history, an independent state called Palestine, and even the Palestinian people itself is a recent development, far more recent than the Jewish people. The Palestinians also ignore the fact that the Jews re-built Israel partly out of necessity because they needed a state where they could be safe. Ironically, Palestinian anti-Israel rhetoric contributes to anti-Jewish hate, making the world even less safe for Jews who are therefore even less inclined to abandon the only state where they are the majority.

Because the Palestinians hang on to their false version of history, they cannot allow themselves to be pragmatic. As an example, in 2012, Palestinian leader Mahmood Abbas experienced a moment of temporary sanity when he acknowledged that the Palestinians would have to abandon their demand for an unlimited “right of return”, but after being vilified, he returned to the same irrational position that essentially consists of demanding two Palestinian states rather than one Palestinian state and one Jewish state. Because they have convinced themselves that all wrongs are on the Israeli side and no wrong is on their side, the Palestinians are incapable of compromising. Very few people would compromise in such a situation if it was real.

Palestinian refusal to accept Jews praying at Temple Mount, even when done quietly, is another symptom of their disconnection from reality. Their narrative does not allow them to accept the fact that Haram al-Sharif is also the Temple Mount, so they see even a harmless prayer as a threat.

Another complicating factor is that the Palestinians’ false narrative has by necessity resulted in the creation of an intricate web of falsehoods that have been patched onto the narrative, trying desperately to keep it from falling apart, like an old blanket that is barely held together by many unsightly stiches and patches.

In that extended narrative, Israel is supposedly an apartheid state. Never mind that non-Jewish Israelis have equal rights with Jewish Israelis and that some Arabs are even part of Israel’s governing coalition.

In other words, in the Palestinian narrative, never mind the facts.

In that fact-free world, there is no room for rational thoughts such as, “we made a huge mistake in 1948 by rejecting Israeli independence based on the 1947 UN partition plan, so let’s try to at least be reasonable now so that we can finally have a state”.

Many people recognize that the Palestinians are a people. Many people support the Palestinian right to self-determination. Many people would very much like for the Palestinians to have a state. US President Joe Biden is one of those people, and he has said so repeatedly. He said it again recently in a speech at the UN General Assembly. But if those same people don’t buy the Palestinian narrative hook, line, and sinker, they’re not seen as allies, they’re seen as the enemy. When Biden stated the obvious truth that Israel has the right to defend itself, he was vilified by the pro-Palestinian wing of his own party.

By hanging on desperately to a false narrative, the Palestinians are increasingly isolating themselves, even within the Arab world. They have painted themselves into a corner. The world is going from wanting to help the Palestinians, but not knowing how, to giving up on the Palestinians. That does not mean that hatred against Israel and the Jews is waning. On the contrary. But that hatred is increasingly pure antisemitism directed against Jews all over the world, with little impact on Israel itself. The fact that a big deal was made of the boycott by an ice cream maker of the West Bank settlements (not even a boycott of Israel itself) highlights how little the BDS movement has achieved.

Nobody in a real position of power takes the Palestinian grievances seriously anymore. Sure, the UN frequently votes to condemn Israel, but those votes have no real consequence. One wonders if some countries vote for those UN resolutions simply to assuage their guilt for not helping Palestinians in any real way. That is not to say that all criticism of Israel is invalid, but the problem in making legitimate Palestinian grievances visible is that they tend to get lost in the forest of historical falsehoods and fabricated accusations.

The answer for the Palestinians is blindingly obvious. If they want a future beyond refugee camps, poverty, dependency, corrupt leadership, and endless violence, they must re-write their narrative based on reality rather than based on fiction. But it is hard to see how that awakening would occur. The Palestinians are so heavily invested in their false narrative and all its associated falsehoods that extracting themselves from it seems impossible.