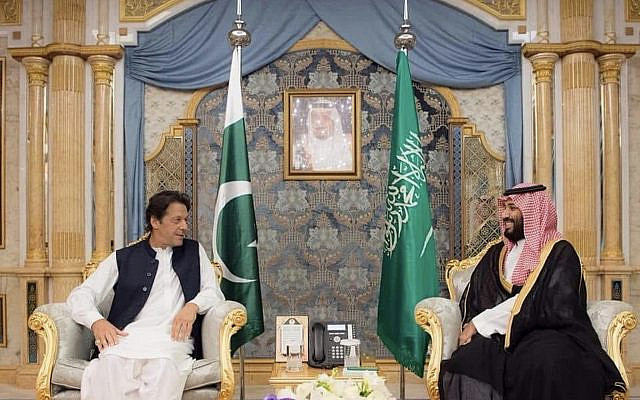 Pakistan and Saudi Arabia appear to be mending fences, with the Kingdom agreeing to revive its financial support to Pakistan. The financial assistance package includes about USD 3 billion in deposits and USD 1.2 billion to USD 1.5 billion worth of oil supplies on deferred payments.

While Pakistan has hailed its ‘brotherly’ relations with Saudi Arabia in the context, it is evident that Pakistan’s new ‘brotherhood’ with Saudi Arabia comes at a time when Pakistan is in the brink of a financial crisis. The Pakistani economy has been faltering, with an imminent balance of payment crisis and the country increasingly dependent on external debts to stay afloat. Given its inability to negotiate with the International Monetary Fund for release of USD 1 billion, Pakistan has had no alternative but to seek help from countries like Saudi Arabia and the United Arab Emirates putting aside its pride filled principles of strategic autonomy and self-respect.

Traditionally, Pakistan and Saudi Arabia have had very close relations, particularly based on religious affinity. Growing defence cooperation and increasing financial assistance to Pakistan marked the ties between the two countries. Saudi’s Crown Prince Mohammed bin Salman visited Pakistan in February, 2019 with a large business delegation which pledged over USD 20 billion to Saudi investments in Pakistan.

The pledged investments however failed to materialise due to Pakistan’s sub-optimal trade and business climate, rampant corruption, procedural bottlenecks, power outages and a long list of deficiencies. Subsequently, relations between the two countries began deteriorating. The strategic drift was evident with Saudi Arabia demanding an early repayment of USD 3 billion in loans meant to shore up Islamabad’s foreign exchange reserves.

Pakistan was to blame for the souring relationship. Pakistan, despite clearly lacking geo-political acumen, economic heft and ideological leadership, had been making attempts to create a substantial international bloc, comprising mostly of Islamic countries bolstering support over its illegal control over Jammu and Kashmir. When India made internal administrative changes in Jammu and Kashmir in August 2019, Pakistan expected support from Saudi Arabia and the UAE. When support was not forthcoming, Pakistan started aligning itself with Turkey and Malaysia. Efforts were even made to project the alliance among Pakistan, Indonesia, Malaysia, Qatar and Turkey as an ‘alternative’ to the Saudi-dominated Organisation of Islamic Cooperation (OIC), even hosting of an Islamic event in Malaysia in December 2019. Pakistan developed cold feet before the summit at the last minute, fearing a backlash from both Saudi Arabia as well as its domestic constituency.

These forays of Pakistan not only infuriated the Kingdom’s leadership, but also was a stark reminder of Pakistan’s disloyalty. In 2015, Saudis had been similarly shocked with Pakistan’s refusal to join their Yemen war. This was despite the fact that Riyadh had, based on certain commitments from Islamabad on the Yemeni crisis, provided a USD 1.5 billion loan to Nawaz Sharif government in 2014. In fact, the Sharifs had begun to move on to other power brokers in the region, notably Qatar and Turkey in 2015 itself. Pakistan sought aid and investment from Turkey and signed energy deals (particularly for long-term contracts of liquefied natural gas (LNG)) with Qatar.

Pakistan failed to assess that both Saudi Arabia and UAE share deep strategic and economic ties with India. Traditionally, India has been a more viable partner for the two countries. India’s total trade with Saudi Arabia has been over USD 33 billion. In contrast, Pakistan’s trade with Saudi Arabia has been around USD 3.6 billion, a tenth. India-Saudi ties had been strengthened further with the signing of defence cooperation pact and Saudi’s growing investments across a broad range of sectors in India that includes agriculture and telecommunications. In March 2019, India’s then External Affairs Minister Sushma Swaraj attended the OIC Foreign Minister’s meeting in Abu Dhabi as a ‘guest of honor’. In December 2020, the Indian Army chief visited Saudi Arabia and the UAE – the first visit of its kind. All of these point at a consistently growing friendship between Saudi Arabia and India, which Saudi Arabia would not sacrifice for a fair-weather friend like Pakistan.

The present economic bailout provided by Saudi Arabia to Pakistan has to be contextualised in the need to prevent a larger crisis in Pakistan and the region as a whole. Pakistan’s Prime Minister, Imran Khan and the country’s top brass have been making a beeline to Riyadh, literally with a begging bowl to pull themselves up from the economic vortex which they find themselves. Pakistan’s economy is afflicated with both internal and external vulnerabilities which have of late aggravated. Barely four months into the FY-2021-22, key economic indicators have been deteriorating, the most significant being the downward spiral of the Pakistani Rupee that hit a historical low of Rs. 175 per US Dollar (on 22nd October 2021), a 12.5 per cent decline since May, 2021.

Pakistan’s economy is once again on the edge of a precipice, trying to stay afloat through a combination new debts and debt service relief. While FY 2020-21 has been marked by a burgeoning fiscal deficit (at 7 per cent of the GDP), the beginning of the FY 2021-22 has seen a sharp increase in the current account deficit. It is being estimated that Pakistan would face a current account deficit to the tune of USD 12-17 billion in FY 2021-22. For the FY 2021-22, Pakistan has budgeted for increased external loans of USD 15.9 billion, up from USD 13 billion in FY 2020-21. IMF budgetary support expected for FY 2022 is USD 2.9 billion. Debt to GDP ratio stands at 84 per cent.

Pakistan has resorted to IMF support to address its economic distress 22 times since its independence, the last being in 2019. IMF’s support now relies on  Pakistan’s fulfilment of conditions it had committed to under the Extended Fund Facility in 2019. Pakistan is finding it hard to fulfil the stipulated conditions, given the domestic opposition and has been desperately looking for financial assistance from alternative sources.

Pakistan’s troubles have also increased with the country being retained in the Financial Action Task Force (FATF)’s grey list since 2018. There has been a flight of investors from the country, with portfolio investments registering a net outflow of nearly USD 2 billion between January 2016 and June 2021. External financing options are becoming more challenging. The inflow of FDI in different sectors of the economy has fallen by 20.3 per cent to USD 203 million in the first two months of (July – August) of FY 2021-22, as compared to USD 254.8 million in the previous year. Net FDI inflow from Saudi Arabia has actually declined by about 68 per cent, to reach USD 7 million in FY 2020-21, from USD 22 million in FY 2019-20.

It is in the above dire circumstances that Pakistan has now resorted to wooing Saudi Arabia. It has now been humbled  and seeks the much needed financial assistance without which it would go bankrupt. Saudi Arabia has only displayed its generosity to save the common man struggling to make ends meet on the streets of Karachi and Lahore. It does not require a strategic mind to predict that this new-found bonhomie would only dissipate with time, given Pakistan’s past record of vacillation on key bilateral issues. When it comes to Pakistan particularly, history often repeats itself.