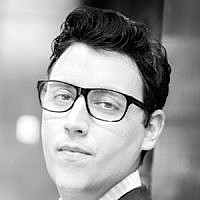 The Blogs
Aaron Rosenberg
Apply for a Blog
Advertisement
Please note that the posts on The Blogs are contributed by third parties. The opinions, facts and any media content in them are presented solely by the authors, and neither The Times of Israel nor its partners assume any responsibility for them. Please contact us in case of abuse. In case of abuse,
Report this post.

On the eve of Israel’s 70th Independence Day, I find myself reflecting on the emergence of my Zionism, a deep love of the Jewish State that blossomed and shaped much of my future. I have shared below a very personal account of its thundering arrival in my life nearly twelve years ago, and would be honoured to hear readers’ accounts of their “aha” Zionist moment(s).

I recall very few pure details of the night I became a Zionist. It is mostly an assortment of fleeting moments, flickers woven in a tapestry of sights and sounds. I wished for years that I had contemporaneously recorded these events. I’m thankful though; I was a poor writer, and in any event would not have neared capturing the night’s essence (as I now attempt) without the privilege of hindsight.

As Canada’s eager flag-bearers in a sea of Americans and Brits, we prepared for our momentous gathering. Many of us, and certainly I, had little appreciation for how our first Israeli Shabbat would unfold.

We gathered for a Young Judea Year Course family photo on the Southern Steps, a majestic stairway to our forefathers’ Temple. We received some rousing, boisterous welcomes, culminating with a shofar’s bellow by Barbara “BG” Goldstein of Hadassah. At that moment, she was our bubbie, a tzedekess with boundless energy and more youthful spirit than that staring back at her.

We then stumbled to the evening’s main event: welcoming Shabbat at the Western Wall. For some of my contemporaries, this was a first pilgrimage, for many of us, a return to familiar holy ground.

We swirled in a seemingly endless hora, insisting on young recruits joining us, their tucked standard-issue rifles jostling as an outpouring of pride glistened at our historical fortune, despite two thousand years of exile and persecution. Of note, the Second Lebanon War with Hezbollah had come to an end weeks prior, a conflict inflamed by the high-profile terrorist capturing of soldiers that we had all watched helplessly by the rivers of summer camp.

Our circular conga increasingly charged with fervour as I grew confident that our stomps would leave lasting marks – a tribute to our arrival and testament to the upcoming nine months of discovery – and we replaced each resolution of “Next Year in Jerusalem” with a punctuated “Year Course 06’”!. A resounding mixture of homecoming, unity and limestone stirred.

Later, we were shepherded nearby for a rushed supper. Without warning, the leader of our “tribe” leapt onto a table festooned with plastic settings, pleading an accented “Ana Bekoach” to the opening refrain of “Twist and Shout”. His fellow Britons knowingly responded in kind.

We completed the night with a two-hour stroll through Jerusalem’s rolling hills to our newly-built fortress in the outskirts of West Jerusalem, mixing and mingling, speaking of past and future, everything and nothing, anticipating more on the shoulders of our newfound, unshakeable bond with each other, our people and our land.

“To be a free nation in our homeland” – everything became clear the night my Zionism was awakened.