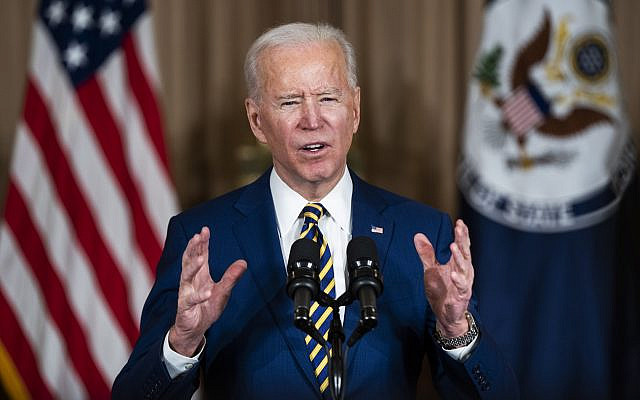 US President Joe Biden’s first foreign policy speech had a clear message for Israel. It wasn’t in what he said, but in what he didn’t say. He didn’t mention Israel. Even more interesting, in naming America’s closest friends, and Biden’s aim for “reforming the habits of cooperation and rebuilding the muscle of democratic alliances,” Israel was nowhere to be found. According to Biden, “America’s alliances are our greatest asset, and leading with diplomacy means standing shoulder-to-shoulder with our allies and key partners once again.” But if Israel is not mentioned among America’s allies, it means we are not a great asset to America, in the eyes of this administration, and it will not stand “shoulder-to-shoulder” with us.

This should come as no surprise to us. I warned that Biden would reverse Trump’s policy, and he went straight to work as soon as he took office. But is this bad for Israel? It is certainly unpleasant, but with all due respect, whether it is bad for Israel or not depends on our actions, not on Biden’s will.

As I explained in countless essays and several books, Israel depends on itself because Israel depends on its internal unity. When we are united, we dissolve the enmity of the world toward us. It is not that we are stronger in the military sense because we are united; it is that achieving unity is itself the purpose of our being a sovereign state. The world feels connected to Israel because our forefathers came from the nations of the world. At that time of the formation of our people, civilization was largely concentrated around the Fertile Crescent. Our forefathers, who came from many tribes and peoples along that area, were initially distrustful and hateful toward each other, much as we are now. Despite their suspicions, they developed such regard for unity that they managed to overcome their enmity and formed a nation.

In doing so, Israel, which contained “specimens” of all the nations of the world, became a minuscule example of world peace. Being “a light unto nations” means being that example. When we unite, we set the example that the world needs, and this dissolves its enmity toward us and turns it into favor. When we decline into the current state of inner conflicts and enmity, we violate the purpose of our nationhood, and the world sees no benefit in our existence.

For the past two millennia, we have been in a state of hatred that we haven’t managed to overcome. By doing so, we broke that sample of “world peace” and the world lost its only proof that peace is truly possible. This is the root of its contempt and hostility toward Jews. Yet, this also means that if we want to reverse the nations’ feelings toward us, we needn’t focus on pleasing them but on restoring our internal unity. This is what will truly please them as it will enable them to forge peace among themselves, as well.

For this reason, I think that the cold shoulder that the Biden administration is giving us is a golden opportunity for the people of Israel to unite, and truly be what we can and must be—a role model of unity against all odds and above all contradictions. If we rise to the challenge, we will not need to worry about who is occupying the White House.