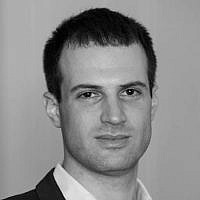 The Blogs
Assaf Weiss
Apply for a Blog
Advertisement
Please note that the posts on The Blogs are contributed by third parties. The opinions, facts and any media content in them are presented solely by the authors, and neither The Times of Israel nor its partners assume any responsibility for them. Please contact us in case of abuse. In case of abuse,
Report this post.

“From the river to the sea, Palestine will be free.” This troubling slogan calling for the elimination of the state of Israel was recently chanted on stage by anti-Israel disruptors at the National Creating Change LGBTQ conference in Detroit, A national conference that defines itself as building “the strongest possible LGBTQ and allied movement.” For the Jewish-LGBTQ members of this “strongest possible LGBTQ movement,” such an incidence is all too familiar, as more and more LGBTQ Jews find themselves targeted for their pro-Israel beliefs. The anti-Israel movement and its anti-Semitic rhetoric are threatening once again to divide the LGBTQ community and alienate LGBTQ Jews who support Israel, just as we recently witnessed with the Women’s March.

It’s regrettable that after years of fighting for a safe space within the Jewish community, LGBTQ Jews in the United States are now fighting for safe spaces within the LGBTQ community – a community that proclaims inclusion as one of its core values. The abovementioned incident at Creating Change was just the tip of the iceberg. Perhaps the most well-known anti-Semitic incident in the American LGBTQ community occurred in 2017 when a Jewish lesbian activist was asked to leave the Chicago Dyke March rally for carrying a rainbow flag emblazoned with the Star of David. March organizers argued that the Star of David – a Jewish symbol – “made people feel unsafe.” Three years ago, during the 2016 Creating Change conference, anti-Israel activists chanted the same refrain of “from the river to the sea,” while forcefully storming and shutting down an event hosted by A Wider Bridge, a pro-Israel LGBTQ organization. Israel supporters in the room that day remarked that the situation was “terrifying, bordering on violence” and felt like the LGBTQ community had abandoned them.

For many Jews, Israel is not just “another country across the Atlantic.” For many Jews, Israel – the only Jewish and Democratic State in the world – is the embodiment of rebirth, salvation, and the answer to 2,000 years of persecution and yearning. Like any country, Israel’s policies are not above criticism. But to ask a Jew to support the notion that Israel does not have a right to exist as a Jewish and Democratic State, or that Jews don’t have a right to self-determination like other people in the world is like asking an LGBTQ person to ignore their queer identity.

Nevertheless, LGBTQ Jews have repeatedly found themselves targeted for their pro-Israel beliefs, accused of oppression and have, in some cases, faced violent shutdowns from their detractors. The notion of political intersectionality that has come to dominate the LGBTQ community is forcing activists with any divergent political leaning into pariah status.

As a proud gay Israeli and Jewish activist, I’ve witnessed this exclusionary agenda firsthand. While completing my master’s at Columbia Law School, I started an initiative to bring law students together to discuss LGBTQ rights across the world. After reaching out to one of the largest LGBTQ student organizations at the Law School, I received an invitation from the organization to an anti-Israel event hosted by the anti-Semitic Boycott, Divestment, Sanctions (BDS) movement and co-sponsored by almost all the LGBTQ student organizations at Columbia. My pleas that LGBTQ spaces should remain neutral from pro-Israel or anti-Israel agendas were declined, and I had to, unfortunately, end my cooperation with that organization. I was recently invited back to Columbia to give a lecture about Israel’s LGBTQ communities. Even though my lecture dealt entirely with issues of discrimination faced by Israeli LGBTQ communities, I received disparaging comments about “Pinkwashing.” At the end of the class, a Jewish student approached me and told me he was banned from an LGBTQ student organization for supporting Israel. Unfortunately, he’s just one of many.

If the LGBTQ community prides itself on inclusivity, it needs to carry out its mandate without allowing itself to be exploited for political gain. LGBTQ Jews who are supportive of Israel deserve to feel safe within these spaces, to be a part of “the strongest possible LGBTQ and allied movement” and to be proud of every aspect of their identities. This is why the work of organizations like the World Congress for LGBTQ Jews and A Wider Bridge is so important. The stand up for full Jewish and Israeli inclusion in LGBTQ life.

About the Author
Assaf Weiss is the Secretary of the World Congress for LGBTQ-Jews, A Wider Bridge's NYC Metro Council Member, and a Columbia Law School graduate.
Related Topics
Related Posts
Comments