The Blogs
Steven Frank
Apply for a Blog
Advertisement
Please note that the posts on The Blogs are contributed by third parties. The opinions, facts and any media content in them are presented solely by the authors, and neither The Times of Israel nor its partners assume any responsibility for them. Please contact us in case of abuse. In case of abuse,
Report this post. 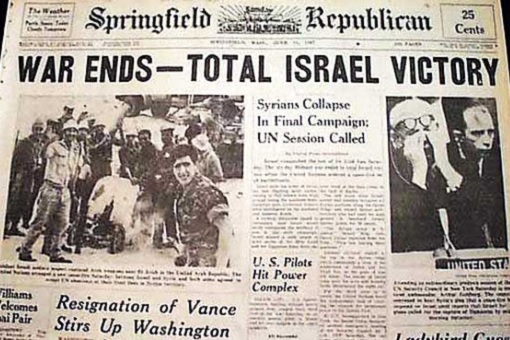 The hundred year war over the establishment of the State of Israel is over.  And the Arabs lost.  They lost at every turn.  In every war, battle, skirmish, and encounter, they lost.

Unfortunately, no Palestinian leader has the courage to inform the Palestinian people of their historic loss. And so, a few fight on.  Like Japanese soldiers isolated on remote islands continued to fight after the conclusion of World War II because no one had told them that the war was over and that the Japanese had lost.

In 1948, the Arabs rejected a partition plan to create two separate, independent states in British Palestine, one Israeli and one Palestinian, and, instead, invaded the newly-created State of Israel and attempted to drive its inhabitants, many newly-arrived from concentration camps in Europe, into the Mediterranean Sea.  There was no doubt of the Arabs’ intention at the time.  Haj Amin al-Husseini, the Mufti of Jerusalem, who represented the Palestinian people, said that the Arabs did not intend merely to prevent partition but “would continue fighting until the Zionists were annihilated.”  They lost.

In 1967, following the massing of Arab forces along its border, Israel launched a preemptive strike on Egyptian air forces in what has come to be known as the Six Day War.  Syria, Jordan and Iraq then joined the fray once again determined to drive the Israelis into the sea.  Again, their intentions were clear.  Hafez al-Assad, then Syria’s Defense Minister declared: “the time has come to enter into a battle of annihilation.”  They lost again.  (During this war, the Israelis captured the West Bank which had been illegally occupied by the Jordanians for the previous nineteen years).

In 1973, combined Arab forces launched a surprise attack against Israel on Yom Kippur, the holiest day in the Jewish calendar. Their goal was once again to overrun the Jewish State and specifically to win back the land lost in the West Bank in the 1967 war.  They lost yet again.

Since the humiliating loss in the Yom Kippur war, the Arabs and Palestinians have given up mass attacks upon Israel but have continued their war against the Jewish State in a series of lesser wars and terrorist attacks including suicide bombings, stabbings, stoning and rocket attacks launched from Gaza, Lebanon, and Palestinian villages in the West Bank. Although the Arabs and Palestinians engaged in these terrorist attacks have managed to murder many Israeli soldiers and civilians alike, they have not succeeded in furthering their strategic goals one inch.  In other words, they have lost – – time and time again.

All this was supposed to have ended with the signing of the Oslo Accords in 1993 and 1995. Among other things, the Accords provided a government for Palestinians in the West Bank to be run by the Palestine Liberation Organization. It also officially divided the West Bank area into three parts, Areas A & B to be largely under the control of the PLO, and Area C (where most of the Jewish “settlers” lived) to be under the aegis of the Israelis. There was supposed to be a five year “interim” period during which the final status of remaining issues were to have been resolved. Instead, during that time, and, on many occasions thereafter (2000, 2008, 2013) the Palestinians repeatedly have turned down good faith offers to create their own independent state.  Thus, the Palestinians not only lost the military war, they also, through their own rejectionism, lost the diplomatic wars as well.

Where does that leave the conflict today? Despite having been given many do-overs in their attempt to drive the Israelis into the sea, the Arabs and Palestinians repeatedly have lost. What other country in history, despite having lost major conflicts, has been allowed to repeatedly refight the last lost war? Generally, the way war works is that the defeated antagonist loses some or all of its territory, its government is overturned, and its casus belli is relegated to the dustbin of history.  For some reason, this general rule has not applied to the Arabs and Palestinians in their relentless war against the Israelis and they have been given limitless chances to eliminate the Jewish State. They have failed. They have lost.  It is time for all parties to move on.

It is especially time for the Palestinians to accept this governing principle set forth by noted Middle East Scholar Daniel Pipes:

“Wars end, the historical record shows, not through goodwill but through defeat. He who does not win loses. Wars usually end when failure causes one side to despair, when that side has abandoned its war aims and accepted defeat, and when that defeat has exhausted its will to fight.”

Both the Germans and the Japanese, certainly as relentless in their war aims as the Palestinians, finally accepted defeat and unconditionally surrendered at the conclusion of World War II.  The allied powers specifically demanded an “unconditional surrender” so that the war would not be refought as World War I had been and as the Arabs have sought to do in the current conflict.

At this point, two options remain.  The world can give the Palestinians more mulligans, allowing them to continue to kill Jewish children in their beds at night ad infinitum, but nevertheless continuing to lose their overall war again and again and again.

Or one could turn to the last (and only) peace accord negotiated between the parties which still remains in effect, the Oslo Accords, and simply implement its final steps.  Many people are unaware of the fact that, under the Accords, for the last twenty-five years, the Palestinians have ruled themselves with their own government, their own police force, their own courts, their own schools without the presence of a sustained Israeli military force in Areas A & B of the West Bank. This should remain in force and the Palestinians should be given even greater autonomy in those areas if possible. They should remain in control of their own autonomous region and possibly achieve statehood one day.

The notion of autonomous regions within existing states is well-recognized in today’s world. For example, there is Azad Kashmir in Pakistan; there are seventeen autonomous communities in Spain, 117 autonomous communities in China; several autonomous Indian nations in the United States; 14 autonomous regions in India; several self-governing Crown dependencies (Jersey, Guernsey, and the Isle of Man) which are not part of the United Kingdom but where the UK is responsible for their defense and international affairs; and 13 other British Overseas Territories (including Gibraltar) which have autonomy in internal affairs through local legislatures.  No one calls Gibraltar or any other autonomous community an “apartheid” state.

As for Area C, where the majority of Israeli “settlers” presently live in major blocks in close proximity to Jerusalem, this area should be annexed by Israel and all of its residents, including Palestinians, should be accorded full Israeli citizenship.

In short, the Palestinians should be accorded every essential ingredient of statehood except defense and international affairs just as other autonomous regions in the world possess. The only “right” the Palestinians must unconditionally surrender is the “right” to continue to kill Jews. They fought that war. They lost.  Someone needs to tell them.  The sooner the better.

September 28, the date of the signing of the last Accord in 1995, should become an official holiday in Israel. And each year on that date, the story of the conflict, which is similar to the tales on other Jewish holidays, should be told: “They tried to kill us. We survived. Let’s eat!”

About the Author
Steve Frank is retired after a 30-year career as an appellate lawyer with the U.S. Department of Justice in Washington, D.C. His writings on Israel, the law and architecture have appeared in numerous publications including the Washington Post, the Chicago Tribune, the Baltimore Sun, the Jerusalem Post, the Jewish News Syndicate and Moment magazine.
Related Topics
Related Posts
Comments