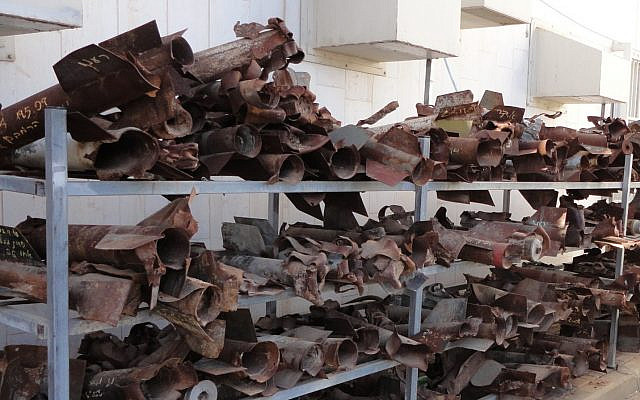 Qassam rockets fired from Gaza onto the Israeli city of Sderot, on display behind a police station in December 2010. Yair Lapid said in his speech at the UN, “Since we left Gaza, over 20,000 rockets and missiles have been fired at Israel”. (Credit: Aaron Vazquez / Wikimedia Commons)

At the UN General Assembly, Israeli Prime Minister Yair Lapid said something that everyone knows, which is that the Palestinians could have a state if only they stopped violence. He said, “We have only one condition: That a future Palestinian state will be a peaceful one”.

Opposition leader Benjamin Netanyahu delivered the same message in the same forum in 2016 when he was prime minister. He said, “I call on President Abbas: you have a choice to make. You can continue to stoke hatred as you did today or you can finally confront hatred and work with me to establish peace between our two peoples. […] I have not given up on peace. I remain committed to a vision of peace based on two states for two peoples.”

Although Netanyahu now criticizes Lapid for delivering the same message that he delivered himself only six years ago, he offers no real alternative. There is in fact no real alternative. Israel cannot remain a democratic state and a Jewish unless the Palestinians have their own state, which is why as Lapid said, “still today a large majority of Israelis support the vision of this two-state solution”.

Based on voting patterns, however, it’s very clear that Israeli support for a two-state solution is lukewarm at best and has given way to other priorities. But imagine for a moment if change occurred on the Palestinian side.

Imagining that eventuality would of course not make it happen. But still, imagine it, because the truth is that it would change everything for the Palestinians. Most Israelis would suddenly see the conflict very differently. There is absolutely no doubt in my mind that it would lead to a Palestinian state, and everyone knows it.

Yet, the Palestinians will not do this anytime soon. In fact, it is more likely that I would be appointed head of the Catholic Church despite being a lapsed Catholic and a life-long atheist.

But I’m not booking a one-way flight to Rome, and no one should expect a Palestinian state anytime soon. The Palestinians made that choice, and they continue making that choice with every terrorist attack on Israel, with every rocket fired on its cities, with every payment made to terrorists, with every hate speech delivered by its leaders, and with every street named to glorify murderers.

Israel’s choice, on the other hand, is to defend itself and not allow the creation of a new terrorist state at its borders. Lapid said, “We will not stand by while there are those who try to kill us. Not again. Never Again.” I wish that the Palestinians and their supporters would understand that message, but there is no sign that they will.