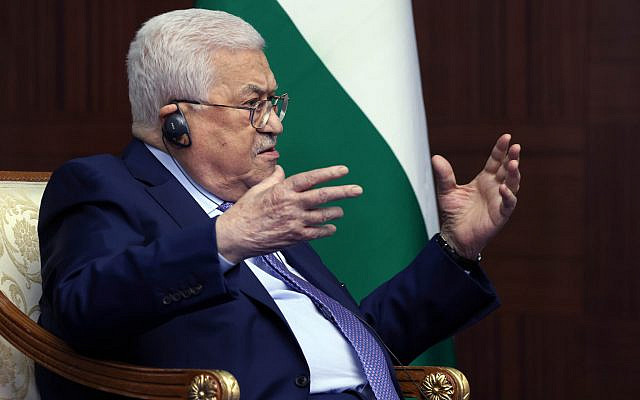 2023, another year, an astonishing nineteenth year, of Mahmoud Abbas’s endless 4-year presidential term, which began on January 9, 2005. Under his kleptocratic rule, the governance of my native West Bank has devolved into what the democracy monitor Freedom House describes as: “no functioning legislature… [the Palestinian Authority (PA)] governs in an authoritarian manner, [and] engaging in acts of repression against journalists and activists who present critical views on its rule.”

For an idea of intellectual and press freedom under Abbas’s reign, consider the Electronic Crimes Law (ECL) issued by Abbas in 2013, “prescribing heavy fines and lengthy prison terms for a range of vaguely defined offenses, including the publication or dissemination of material that is critical of the state, disturbs public order or national unity, or harms family and religious values.” How did millions of Palestinians fall under the control of this tyrant – and how can we regain our freedom?

In 1993, the peace-seeking Israeli government handed governance of the Palestinian residents in Gaza and the West Bank to the Palestinian Liberation Organization (PLO), a notorious terrorist organization that was known to be responsible for the murder of Israeli Olympic athletes and of schoolchildren, and the hijacking of cruise ships and planes. To those well-meaning but delusional Israelis Yitzhak Rabin and Shimon Peres, who shared the 1994 Nobel Peace Prize with the PLO’s terror mastermind Yasser Arafat, may be repeated the rebuke of Winston Churchill to Neville Chamberlain: “You were given the choice between war and dishonor. You chose dishonor, and you will have war.”

In 2000 and again in 2001, the Israeli government made generous permanent peace offers that would have created an independent Palestinian state in Gaza, the West Bank and East Jerusalem. Instead, Arafat opted for war. For five horrific years, terrorists armed by the major factions of PA society, including the Fatah (meaning ‘Conquest’) faction founded by Arafat, slaughtered more than a thousand Israeli civilians and wounded thousands more in a campaign of suicide bombings. After those bloody years, the world largely breathed a sigh of relief when Arafat slipped this mortal coil and left power in the hands of longtime deputy Mahmoud Abbas, also referred to as Abu Mazen.

Relief didn’t last long. Although Abbas was elected to a full term which began in 2005, and legislative elections were held in 2006, no further elections for any branch of government have been held since that time. In 2018, Abbas formally dismantled the Palestinian Legislature, and in 2019 he abandoned the PA constitution, replacing it with the constitution of the PLO terrorist organization, which remains under his complete control. In 2021, he preemptively canceled mooted elections, and in 2022, he adopted a “resolution ordering the PLO’s Executive Committee, which Abbas heads, to restructure the PA’s institutions.” What’s left of the PA’s civil rule in the West Bank is an absolute dictatorship under the sole control of the 87-year-old Abbas.

During these long 18-plus years, peace has eluded the region primarily through Abbas’s personal obstinance. In 2008, Abbas walked away from a third Israeli peace offer that would have relinquished Israeli control over the Old City, location of the holiest site in the Jewish faith, the Temple Mount. Under his rule, Palestinian public education and news media fully normalized and are even saturated in antisemitism, often featuring explicit calls for violence against Jews. Abbas’s public statements and speeches place all of the onus for peace on Israel, as the Anti-Defamation League’s Jonathan Greenblatt succinctly wrote: “The Abbas approach should be rejected by the international community, not merely because of its bias against Israel, but also because it recycled the same-old ideas that have pushed Palestinians down the pointless loop of delegitimizing Israel rather than the hard climb of reaching compromise.”

Over 2 million Palestinians live under the tyrannical power of Abbas’s PA in the West Bank, including me and many of the people I care most about. Abbas is the real occupier of our cities and our homeland, not our future partner Israel, which has consistently had a majority in favor of peace and not Benjamin Netanyahu, a leader who has explicitly supported the idea of a Palestinian state so long as Israel maintains the necessary security controls.

Abbas has offered us neither democracy nor independence, but we remain a free people. It is time for the Palestinian nation to reach a new agreement with Israel and the international community, abolishing the dictatorial rule of Abbas and the PLO and instead granting our people what we truly deserve: peace with dignity alongside our neighbor, the Jewish State of Israel.