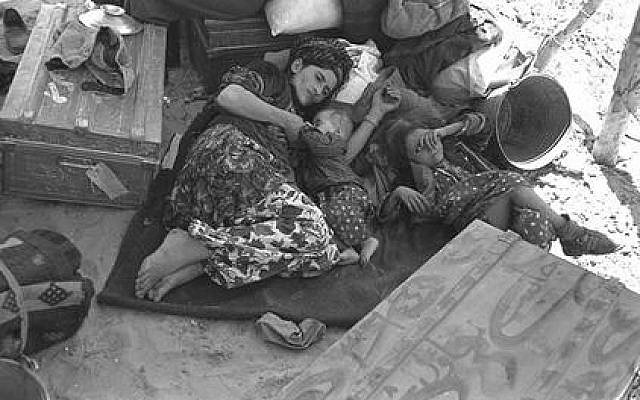 Being a Jew affected every aspect of my life. Because we were Jews from Islamic lands, we were shamed out of our passports. Because my father was a Jew with no passport, he could not travel to open new markets for his import-export business or continue working with Middle Eastern and North African contacts. Muslim businesses refused to trade with my father when they found out he was a Jew.

Because I was a Jew whose parents could not afford to send me to a school focused on teaching instead of converting, I had to live through daily shame and blame for the death of Christ. I stayed much longer than I should have in Stella Maris, where I was told that Hitler would go to Heaven if he “seriously repented” before taking his last breath, while I and my People, unrepentant Jews (the unbaptized), would continue to be persecuted.

Growing up in Egypt was easier for my father than my mother’s experience in Iraq. Growing up in Mansoura, despite always being careful to “know his place” as a Jew under Islam, Egypt was still a cosmopolitan country until Nasser’s expulsions. It was a scarier life for my mom, facing the constant “filthy Jew we are coming to take you,” taunts and assaults on her body and mind on the streets of Baghdad. Her childhood culminated in the Farhud, Baghdad’s pogrom against its Jews when she was 16. The screams of terror and violence, the stories of rapes and slaughter, the burning Jewish shops, the terrible sight of the decimated Jewish Quarter, never left her. The marriage of Islamic and Nazi anti-Semitism fueled the Farhud and a Jew-Free Iraq.

I did not grow up with illusions of what a beautiful life Jews in Arab lands had before they were forced out. Nostalgia was not my family’s way of surviving.

There are no Jews left in my parents’ Egypt or Iraq, and there would be no Jews left in Israel if the Arab nations had their way. They pauperized and got rid of the entire population of approximately 850,000 Jews from our ancient communities all over the Middle East and North Africa. Why don’t more people ask, “Where did they go?”

Most Middle-Eastern and North African Arabic Jews, Sephardic Jews, Jews from Arab lands (the Mizrahim), were settled in Israel, penniless and broken, in the 1950’s and early 1960’s. Israel was the answer the six million Jews killed in the Holocaust did not have.

Israel hating Jewish movements like Jewish Voice for Peace chanting “from the river to the sea Palestine will be free” could care less that Arab lands are Jew free – the goal is to Jew free Israel.

They twist the narrative, ignorantly promoting rubbish, how Jews from Arab lands “left” their 2,500-year-old communities for the maabarot with nothing.

They go out of their way to embrace Hamas-loving Linda Sarsour and convicted terrorist Rasmea Odeh as keynote speakers at their conventions. Hamas thugs are freedom fighters. These Jewish anti-Zionists play the part of dangerous fools as the Muslim Brotherhood laughs.

For Islamists, Jews and Christians cannot be equals with Muslims. The ideology is based on total dominance of the entire region. Israel is an affront to Islamic hegemony. Palestinians, caught in the middle, have been utilized by Islamists to destroy Jewish Israel.

Without understanding the deeply ingrained Islamic need to maintain dominance, it’s impossible to understand how every single Arab state was willing to turn Palestinians into forever refugees waiting for Israel’s destruction.

Arafat’s “Zionism is Racism” slur is one of those tell a lie enough times and it begins to sound like the truth. The ignorant join hands with Farrakhan, our homegrown vicious Jew hater. His lies that Jews control the world, that Jews are evil non-human “termites” undermining everything good, are dangerous. Exposing him is not racist any more than exposing Islamists is Islamophobic.

The lie that the Jews killed Christ was truth in my Catholic convent school in Japan. It was the reason Jews would always be persecuted and why I was scapegoated, for years the only Jew in my homeroom. The insanity of believing that the Romans, the Roman conquerors who had ultimate power over the Jews they nailed to crucifixes, were just “following orders” from Jews is as convoluted as believing Arafat’s cunning “Zionism is racism” slur.

That slur is the most damaging iteration of anti-Semitism in our times. It feeds BDS efforts to delegitimize and destroy the Jewish country. Anti-Zionism terrorizes individual Jews. It affected my personal life more than once.

A memory of being asked in a job interview, who did I support, the Israelis or the Palestinians? I tried unsuccessfully to skirt the issue. Zionism to them was racism, and they were not hiring racists. My father was blackballed for being a dirty Jew. I have had my share of being marginalized for being a Zionist. It’s the price we have to pay until “Never Again” is a given and Israel is safe.

Zionism fulfilled its aim, raising the “Wandering Jew,” the quintessential outsider, to equal status among other humans/nationalities. We need Israel, and we must have the courage to be Israel wherever we live. The political is always personal.