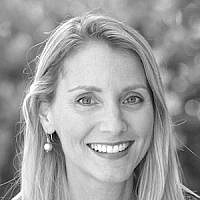 The Blogs
Lauren Berkun
Apply for a Blog
Please note that the posts on The Blogs are contributed by third parties. The opinions, facts and any media content in them are presented solely by the authors, and neither The Times of Israel nor its partners assume any responsibility for them. Please contact us in case of abuse. In case of abuse,
Report this post. 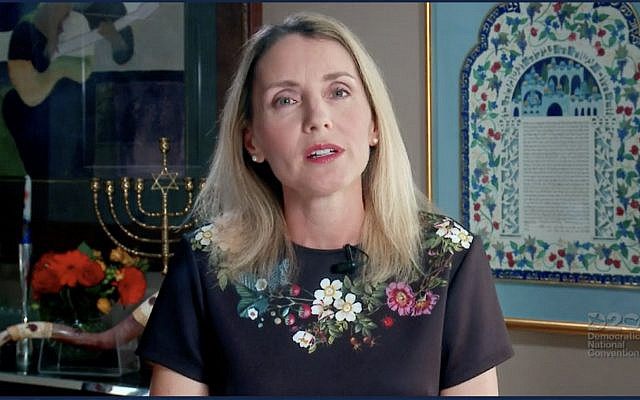 Lauren Berkun gives the benediction at the Democratic National Convention, on August 20, 2020. (via Twitter)

When I was invited to participate in the closing interfaith benediction for the Democratic National Convention (DNC), I was deeply honored and humbled. Given the complexity of spiritual leadership in this political climate, I immediately started wrestling with the best approach to this delicate task. Then I learned that my speaking part would be 40 seconds in total! I determined that my charge as a rabbi was to contribute a meaningful spiritual message that would reflect Jewish values, while also speaking to Americans across religious and political differences, all in just a few sentences!

Why should we offer prayers at a political convention? For me, the purpose of Jewish prayer is two-fold. Prayer is an opportunity for spiritual connection – to be known and to be heard by a loving God who is the source of wisdom, and comfort, and holiness. At the same time, prayer is an opportunity for personal introspection and stock-taking. Am I living up to my spiritual and moral obligations? How can I aspire to be a better person and fulfill my responsibilities to build a better world? In my few sentences, I wanted to reflect both aspects of prayer. First, in this time of uncertainty and fear, I felt that it was important to call upon God as a refuge in times of distress. Second, I wanted to express the divine demand for human action. God awakens us to our moral obligations and depends on human partnership to repair a broken world. In this moment of national crisis, each and every human being is imbued with the potential to serve as an agent of change. Prayer can spur us to a sense of human responsibility and accountability.

Finally, I wanted to craft my short prayer with the focus on what it means to be at home. During this pandemic, we have all experienced the meaning of home in new ways. Knowing that the DNC would be experienced from our homes, I wanted to reflect on what it means to build a home based on the guiding values of human dignity, equality, and justice. At the Shalom Hartman Institute, we have been thinking about the meaning of “home” for several years now as part of our Israel engagement and Jewish peoplehood project, iEngage, which explores the relationship between Israel and world Jewry. American Jews are deeply at home in America, while also maintaining a relationship with Israel as the Jewish homeland. In both cases, being at home involves a set of responsibilities and obligations to bring the best of Jewish values to shape our homes.

In the spirit of pluralism which guides all of my work, I do not believe that Judaism must align with a particular partisan identity. I think the conflation between religious identity and partisan identity is dangerous both for religion and for politics. Rather, what we have found at the Hartman Institute is that rabbis can foster more tolerant, pluralistic communities by helping their congregants talk about their political convictions through Jewish values. In a values-based conversation, people of good faith can share a commitment to similar values even if they arrive at different policy positions as a result of their commitments. If we can help people become more self-aware about the values that animate their own politics, and more open to listening and learning from others who have different policy positions, we can create healthier communities.

For me, presenting a prayer at the DNC gave me an opportunity to share with a national audience a message of hope from the Jewish tradition. I tried to be careful not to use that prayerful moment as a moment of political endorsement. There are many intelligent, moral, and kind human beings who are inspired by their religious commitments, and arrive at different policy positions. As people of faith, we can contribute to a healthier society and a healthier political discourse if we embrace a religious humility that acknowledges that no single human being, school of thought, or political party can have a monopoly on divine Truth.

The ancient rabbis modeled a tolerance for diverse views in the institution of the beit midrash, a place of learning and discussion that invited a wide range of opinions on matters of theology, ethics, and practice. My work with rabbis at the Shalom Hartman Institute focuses on a methodology of values-based and text-based education that empowers rabbis to transform the current communal discourse of toxic divisiveness to open-minded and open-hearted conversations of mutual respect and understanding.

It is very difficult in this political moment to foster tolerance for diverse views when so many are filled with fear and anger. But as we enter the month of Elul today and begin our preparations for the High Holidays, I am thinking about the meaning of Rosh Hashanah as Yom ha’Din (the Day of Judgement). For me, one of the most powerful images of the High Holidays is God as Judge. I try to remind myself each year that God alone is Judge. My job is not to judge other people. My job is to repent, to grow, to improve, and to live up to my obligations. We can have deep convictions and strong commitments without partisan antipathy and without self-righteous judgmentalism. The rabbis created a model of how to do that, 2,000 years ago in the beit midrash. Perhaps, as we embrace that model, we Jews can serve as role models in American society today for a passionate commitment to actualize our values within a framework of openness and tolerance.