This week, U.S. Senator Chuck Schumer (D-NY) came out publicly in opposition to the Joint Comprehensive Plan of Action (JCPOA).  His public comments on the proposed Iran Deal were based solely on policy merits. The remarks were nuanced and respectful about the process that is Democracy.

Yesterday I received an email from the liberal/progressive community group, MoveOn, which is aligned to the Democratic Party.  My party.  Up until yesterday I was an email subscriber of MoveOn.  After receiving the email, I was disgusted by the demonization and fear tactics used by this entity whose tagline is “Democracy in Action.”  I unsubscribed to their email list.

The message was anything but nuanced and respectful.  It attempted to vilify a senior statesman, in Senator Schumer, for following both his own conscious and the overwhelming voices of his constituency.  Schumer’s Senate office was receiving 10 messages against the JCPOA to every 1 in favor of it.  This is Democracy in action – not the fear tactics used by MoveOn. 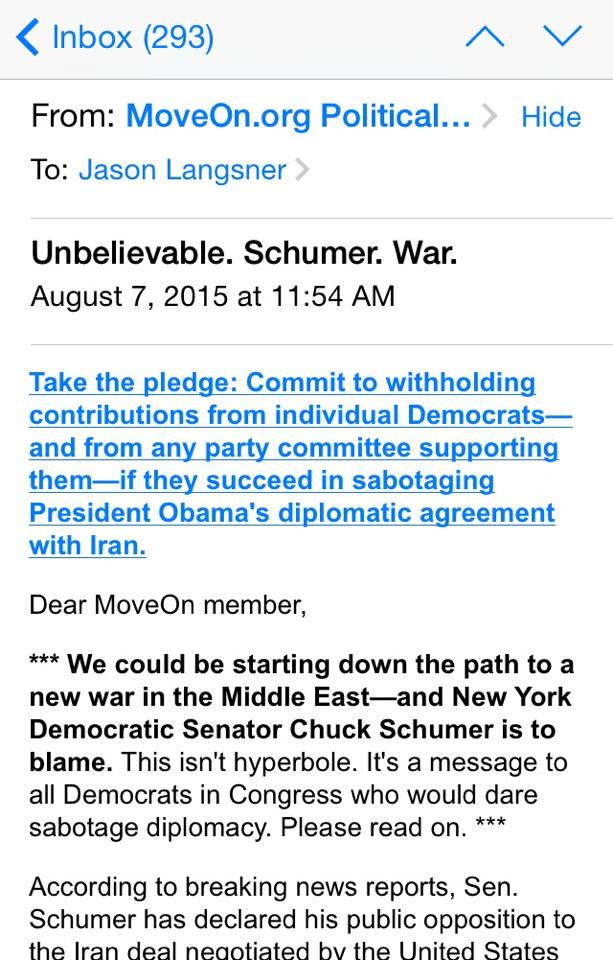 Rather than respectfully agreeing to disagree with my party’s next Senate Leader – MoveOn called him a warmonger and a saboteur in this message.  That is unfair and MoveOn should be ashamed of themselves for preaching such vitriol and rhetoric.

Nobody is rationally arguing that war is the only alternative to opposing the Iran Deal.  President Obama’s own Chairman of the Joint Chiefs of Staff, General Dempsey, has said under oath that we have a “range of options” beyond war.   But MoveOn is promoting fear tactics in this email and on its Facebook page with the promotion of this anti-Schumer campaign with the words “60 Days to War” included in its infographic. 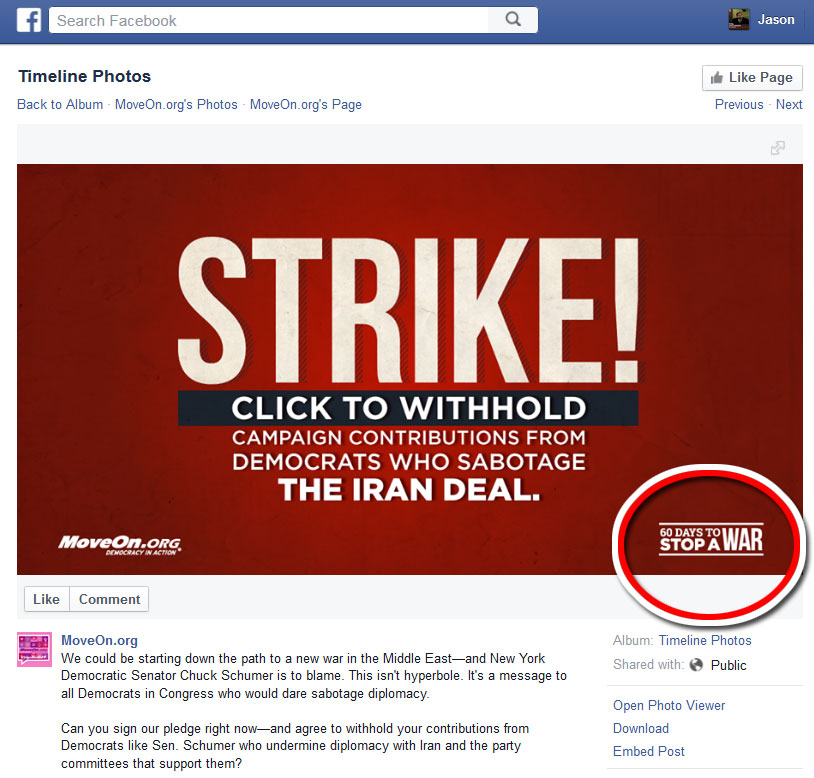 When did disagreeing on policy and challenging ideas become un-Democratic or un-American?  Senator Schumer’s opposition is based on what he feels is best for New York, best for America, and best for Israel – America’s most important ally in the region.

MoveOn has called on its members and supporters to sign a petition for “withholding contributions from individual Democrats – and from any party committee supporting them – if they succeed in sabotaging President Obama’s diplomatic agreement with Iran.”

Since I am no longer an email subscriber to MoveOn, I am curious if they will do the same vilification of Engel, Sherman, and Deutch.  These Democratic leaders are tasked to oversee 1) our party’s interests in the chamber of our government that represents the peoples’ interests; 2) in the committee that has oversight on such issues related to Israel and Iran.  And if these three leaders, plus the others including the next Senate Democratic Leader, oppose the deal – are they “sabotaging” diplomacy or are they voicing their own opinion of democracy in action based on their own years of collective knowledge as subject matter experts in foreign policy?  Just because they agree with Republicans and 70-80% of Israelis, they are not saboteurs or war mongering.  I believe this is how democracy is supposed to work…

The JCPOA has a real chance of becoming law based on political tactics more than it standing on its own two feet as good public policy.  First, the deal should have been a treaty.  Article II, Section 2 of the United States Constitution grants power to the President to make treaties with the “advice and consent” of two thirds of the Senate.  The political gamesmanship that is occurring and has been occurring disappoints me because the JCPOA IS NOT A TREATY – it is an Executive Order.  The Senate did not advice and consent during the formation of the deal.  They were informed about it.  And the Senate now has a chance to vote on it, but the next Senate Democratic Leader is being demonized by Democrats for his stated future vote.

Congress fought the Administration and won to allow the Legislative body of America’s government to have a voice in the debate.  This gave the American people a voice in the debate too.  The Bipartisan Nuclear Review Act of 2015 grants the House and the Senate 60 days to review the JCPOA.  But it doesn’t treat it like a treaty.  Only one-third of either party can uphold the JCPOA and the Administration’s Iran Deal because President Obama has threatened a veto.  Therefore, rather than requiring 67 Senators to support the Iran Deal for it to become law, as would be required if it were properly introduced as a treaty, only 34% of Senators OR House members supporting it could make it U.S. law.  That is not democracy in action either.  Democracy is based on the majority not the 34-percent.

I place no blame on President Obama, Secretary Kerry, Secretary Moniz, and Secretary Lew.  They believe this is the best path for Iran to be prevented from getting the bomb.  I belief this to be a genuine belief and I have no reason to question those beliefs.

I place no blame on Senator Schumer for disagreeing with the opinion of these four public servants of the American people and their beliefs.  Our government is a government for the people, by the people.  The people have a voice.  And it is our unalienable right to voice that voice.

Schumer is voicing the voice of New Yorkers – such as that of my Jewish grandparents in Brooklyn.

Senator Schumer made his voice heard.  It is time for Democratic National Committee Chairperson Debbie Wasserman Schultz – a champion of the Jewish people and a champion of Israel throughout her entire career – to make her voice heard about this process too.

Democrats.org, the DNC’s official website, says that “There are several core beliefs that tie our party together: Democrats believe that we’re greater together than we are on our own—that this country succeeds when everyone gets a fair shot, everyone does their fair share, and everyone plays by the same rules.”

Rep. Debbie Wasserman Schultz (D-FL) has the toughest vote in her entire career ahead of herself.  Her constituency, in Florida, are vociferous in opposing the Iran Deal.  “I know Chuck’s decision was based on what he personally concluded was the most likely way of preventing Iran from getting a nuclear weapon,” said DWS on August 7th on CNN. “That’s the choice that I’m going to have to make after I go home and talk to my constituents as well.”

Unfortunately the tactics of MoveOn and others to try to call those who oppose the deal as warmongers and saboteurs of diplomacy are not tying Democrats together.  Those tactics and the vitriol are pushing Democrats apart.

I feel and fear House Minority Leader Nancy Pelosi (D-CA) and Rep. Jan Schakowsky (D-IL), who is Jewish, are going to end up whipping enough votes in the House to secure the Iran Deal’s veto.  I recognize that they too have every right to agree with the Administration and that they genuinely think that this is the best option to prevent Iran from getting the bomb.  They are actively lobbying their Democratic colleagues in the House to get +34% support of the deal.

If DWS and Rep. Steny Hoyer (D-MD), the number two Democrat in the House whose constituency includes a large Jewish population, oppose the deal, then perhaps they can garner enough support to block it — with the backing of Engel, Sherman, Deutch, Israel, Meng, Lowey, and the growing chorus of those opposing the deal.

I’m less concerned about the Senate than the House.  Only 6-7 Democrats will need to vote against the JCPOA to uphold the veto.  Republican Senator Jeff Flake (R-AZ) is still on the fence, which creates the range.  Schumer is the first Democrat to oppose.  I suspect New Jersey Democrat Bob Menendez will be next.  And I’m hopeful that Maryland Democrat Ben Cardin will be after Menendez.  Those three could then carry other Democrats that are on the fence.

Outside of the policy debate in purely a political lens, since 2008, according to Gallup, Jewish Americans’ identification of being a Democrat dropped by 10 points from 71% to 61%.  Some of those switched parties to become Republican but many also dropped their party affiliation and became independent.  I only fear this trend will continue if politics continue to trump policy and Democrats, like myself, see the politicalization of Israel occur because of Democratic policies in the Middle East are not favorable to the interests of Jewish Americans.

If the DNC loses another 10 points of Jewish Americans identifying as Democrat – and with both Secretary Clinton and Senator Bernie Sanders (I-VT) supporting the JCPOA – the Jewish vote in 2016 cannot be considered a lock for the DNC’s nominee for President of the United States.  This would be a game changer for American politics if under one Administration – through eight years – the Jewish Democratic vote dissipates as a lock or if members of the Jewish community do not come out to the poll because they don’t want to vote for a Republican but they cannot support a Democratic candidate that isn’t aligned to their views as an American first and as a Jewish American second.