It was one of the highest and lowest points in the relationship between the young state of Israel and the Vatican. Pope Paul the 6th came for a visit to the Holy Land. It would be the first time a pope visited the state of Israel. Ever. He was also the first pope to leave Italy in 150 years. The visit that took very humble, and even humiliating proportions, left unimaginable impacts on the Jewish people.

As a whole, to say the least, the visit was not very friendly – to say the least. In preparations for the visit, Israeli diplomats were left scrambling for details, and the pope refused to meet any Israeli officials in Jerusalem. In all of his speeches and correspondences, Pope Paul did not mention the word Israel even once. He avoided any site with significance to Israel and even refused to visit Yad Vashem, though he did send an accompanying cardinal to light six candles in Yad Vashem. His speeches were distant and cold. In official press videos and news reports from his visit, Israel is omitted altogether. The pope insisted that the official Israeli reception for him be held in Megiddo, in Northern Israel. The site is very important to Christians who believe it will also be the site of the ultimate battle between good and evil (hence the word Armageddon).

The Sephardic chief rabbi of Israel caused a huge stir when notifying the government that he would refuse to greet the pope in Megido. Judaism is a religion as big, if not bigger than Christianity, he argued, and if the pope would like to visit him in his office in Jerusalem, he would meet him, but otherwise, not. A major pressure campaign against Rabbi Nissim took place, so powerful that Golda Meir and Levi Eshkol warned him he might get fired. He was also told that because of this, there might be pogroms against Jews in Catholic countries. Rabbi Nissim did not back down from his position and did not show up in Megiddo. Menachem Begin’s Herut party also implored President Shazar not to agree to the Megiddo meeting. In the end, the reception did take place in Megiddo.

After touring Nazerath and northern Israel, the pope returned to Jerusalem and visited Mount Zion on a road paved especially for this occasion, with the consent of the Jordanians. It went from Israeli-controlled Jerusalem to Mt. Zion. He could never have guessed that this same road would serve Israel paratroopers three years later in retaking the Old City of Jerusalem. 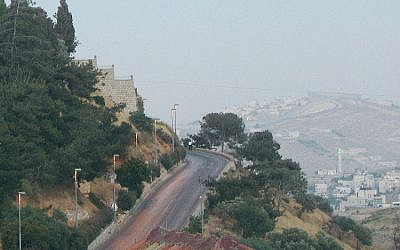 As he was crossing the Mandelbaum gate, Paul created a bit of a scene by defending his predecessor Pious the 12th from the (true) accusations that he had assisted the Germans in the Holocaust. The condescension and antipathy could not be concealed.

Yet there was another awkward part to his visit, which comes right out of Parshat Korach.

Very few people know that the Church of the Holy Sepulcher and the gravesite of King David are back to back with one another. On the rooftop of the building, there is a room built by Israel’s second president Yitzchak Ben Tzvi. For 19 years, from 1948-1967, the Israeli president would receive his audiences there three times a year–on Pesach, Shavuot, and Sukkot. Jews would come from all over to get a glimpse of the Temple Mount in the spirit of the Torah command calling on every Jew to ascend to the Beit Hamikdash three times a year. “To see and to be seen.” Right below the Israeli president’s rooftop apartment is an old Byzantine room called “the room of the last supper.” 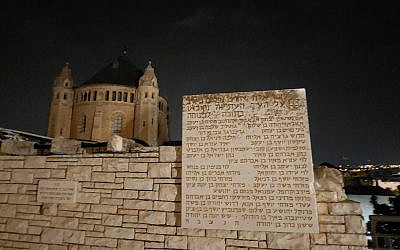 View from the roof of David’s tomb and above the ‘room of the last supper,’ right outside President Yitzchak Ben Tzvi’s reception room, where Jews came to see the Temple Mount from 1948-1967. (courtesy of the author)

Incidentally, when I was visiting there to pray at the grave of King David on a late Saturday night, I had to explain to a Hassidic young man who went into the room that, in fact, that is not the room in which they are serving Melaveh Malka. He had thought that the last supper it was referring to was the meal Jews customarily have after Shabbat escorting the Shabbat out.

As Pope Paul exited the room of the last supper and came to the road from which you have a beautiful and scenic view of both East Jerusalem and West Jerusalem. You can see Temple Mount, the Old City, the City of David, as well as Mishkenot Sha’ananim built by Sir Moses Montefiore, and Jerusalem’s new city. Accompanying the Pope was a short Polish Jew named Shmuel Zanvill Kahana. He was the son of the head of the rabbinical court (Av Beit Din) in Warsaw and then the rabbi of the Old City, Rabbi Shlomo David Kahana. It is very much worth noting that to this day if you go to Mt. Zion, you will find adjacent to King David’s gravesite and small museum called “The Holocaust Dungeon.” While it is small and modest, it is worth noting that this was the first Holocaust museum or memorial to be built in the post-Holocaust years. The museum was built in 1948, and in 1949 Simon Weisenthal brought 30 jars of ashes of victims of the Holocaust to it. While it is somewhat of a graphic and less methodological museum, it is also a strong reflection of the feelings of the survivors and Jews immediately in the post-Holocaust era. 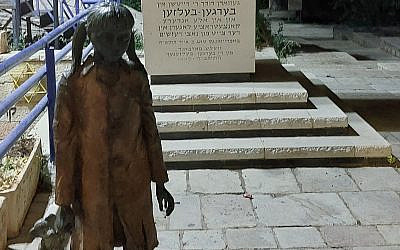 Holocaust memorial on Mt. Zion, built in 1948. (photo taken by & courtesy of author)

The pope turned to Shmuel Zanvill Kahana who was then the head of Israel’s Office of Religious Affairs, escorted him out, and asked him: “in front of us are both halves of Jerusalem, East, and West. Who do you think it belongs to?”

Rabbi Shmuel told the pope: “we recently read in synagogue the story of Korach, who disputed Ahraon’s priesthood and claimed it was his. All attempts by Moses to prove that Aharon was God’s chosen priest failed. The fire that consumed the 250 rebels who brought their own Ketoret (incense), the ground swallowing Korach and his followers, and not even the plague that killed rebels among the Jewish people, narrowly stopped by Aharon and his Ketoret. The only thing that brought matters to a convincing conclusion was putting in the staffs of all heads of every tribe, and the staff of Aharon blossoming with flowers. Blossoming and life end disputes and establish the reality”. S.Z. Kahana pointed to the West and showed the beautiful and blossoming city, contrasted by the neglect and desertion with which the Jordanians have treated East Jerusalem, and told the pope that is the answer to the question “to whom Jerusalem belong.” The pope then crossed into the Mandelbaum Gate and went back to Jordan, from where he returned to the Vatican. The next time a pope would visit Israel was in the year 2000.

The visit was, in many ways, humiliating. In all telegrams and addresses sent by the Vatican, Israel was not mentioned, and they were addressed to “President Shazar–Tel Aviv.” Jews from around the world who criticized Rabbi Nissim’s refusal to meet the pope anywhere other than in his own office in Jerusalem thanked Chief Rabbi Nissim for his decision not to go. To many, including the known left-wing Haaretz newspaper, it felt like a national humiliation, so much so that they issued an editorial thanking Rabbi Nissim. However, there was a price to be paid. In 1972 he was the first chief rabbi not holding the position for life and was replaced by a young Rabbi Ovadia Yosef, a change that also made history.

And yet, with all said and done, one year after this visit, the Vatican issued its famous nostra Aetate document, which de-escalated centuries of Catholic hate and animosity towards the Jewish people. Perhaps more importantly, the pope’s refusal to land in the Lod airport and to go through the regular official channels of visiting Jerusalem allowed the Israeli government to pave several roads towards the Old City, roads that were vital to the retaking of the Old City of Jerusalem in 1967’s Six Day War.

And so, this visit of the pope, like so many other events in the history of our people, reminds us of how events that seem like they are for the worse can end up being for the better. It teaches us the power of faith, perseverance, and carrying oneself with pride regardless of the direction being taken. Whether it was Israeli officials who met him with pride in Megiddo, or Rabbi Nissim who refused to travel to meet the Pope, at the end of the day, it all ended up promoting peace and dialogue and was a step forward for the Jewish people who continue to live on. Am Yisrael Chai.