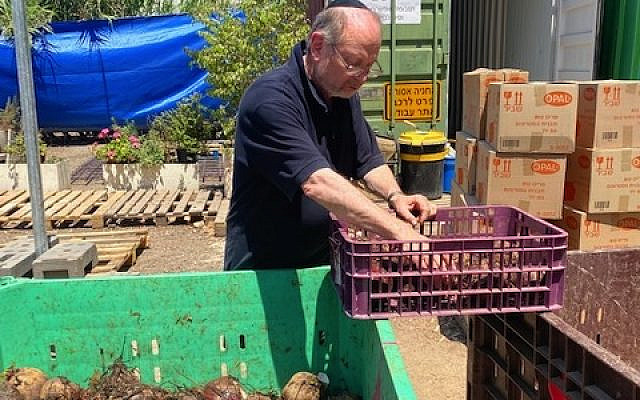 Behind some nondescript buildings and down an alleyway in Tel Aviv, you will find several cargo containers. Even Waze has a hard time finding this place.

One container holds an office, another a makeshift kitchen (more on that later), and another refrigerated one holds food to be distributed.

I was there this summer with my children and grandchildren to help Gideon Ben Ami — the founder of Pesia’s Kitchen — and his team of indefatigable field workers who bring more than food to the plates of those who are hungry.

Tuesday is the day they receive shipments of vegetables and foodstuffs. All of these are unloaded into huge bins and the alleyway becomes clogged by those from communities and programs that distribute the fresh food to people in need.

Across the alleyway there is an eldercare facility. Residents join the lines, picking through the bins to find food for their own kitchens.

The genteel phrase “food insecurity” has replaced the harsher and more realistic fact that people are hungry. Hunger is real. Gideon knows that the current economic climate renders buying fresh produce out of reach for people on fixed incomes.

That day, I was the master of the eggplant. I had to fill box after box to facilitate quick distribution. Under the hot July sun, volunteers admonished me to avoid the slowly over-ripening vegetables in favor of the better produce near the bottom.

As I was sorting, I saw close up how the (mostly) women stood evaluating the handful of vegetables they would take. But they gave most of their attention to the onions, for onions were an essential for the soups they would cook. They were ruthless. If the onion was not perfect they would not take it.

And I saw something else on their faces: joy. There is power in being able to pick out your own food — in not having to depend on delivered meals when your entire life you ate your own cooking. They were alive again, in a supermarket-like experience wandering through the aisles and in control of what they would eat and how they would cook it.

Many departed with a straighter back and stronger steps.

Gideon and his team give more than food to their clients — they give self-respect. And they also make a mean soup for hundreds of people (thus the kitchen). For those who are too infirm to cook — they prepare a daily homemade soup filled with vegetables, and distribute it with love.

I’ve known Gideon for years. He has shown me the underbelly of Israeli society — the areas tourists never see. He has been working to protect the hungry and poor in ways we can only imagine.

Yes, the world is currently undergoing great trauma: global warming, democracy threatened, war, and Supreme Court dysfunction. But people are still hungry, and getting hungrier. Pesia’s Kitchen (named after Gideon’s mother) has not forgotten and works to create a kinder and gentler world for those who have been abandoned by life. We should all be so inspired to act.