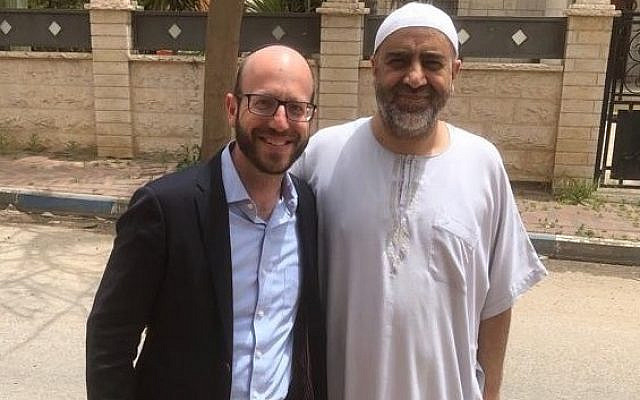 Despite the coronavirus pandemic (and partially because of it) and despite the threats of annexation by the government of Israel, which are clearly contradictory to the cause of Israeli-Palestinian peace in our region, there are still people here who are pursuing peace in out-of-the-box and creative ways. One of these people is Rabbi Dr. Daniel Roth, Director of Mosaica’s “Religious Peace Initiative”.

The Religious Peace Initiative was founded by Rabbi Michael Melchior , the president of Mosaica, who is Israel’s leading Jewish religious peacebuilder (about whom I have written on this blog more than once in the past) and Sheikh Abdullah Nimer Darwish, the founder of the Islamic Movement in Israel who also established the Adam Centers for Dialogue Between Religions and Civilizations located in the Israeli Arab city of Kafr Kassem and in the Palestinian cities of Ramallah and Gaza City

Roth teaches Religion and Conflict Resolution at Bar Ilan University’s Conflict Management, Resolution and Negotiation Program and at Tel Aviv University’s International Program on Conflict Resolution and Mediation, as well as at the Rothberg School for International Students of the Hebrew University in their summer program on Coexistence in the Middle East. Previous to this, he was the founder and director of the Pardes Center for Judaism and Conflict Resolution, where he taught courses on this topic for students from abroad who came to learn in Jerusalem. He holds a Ph.D. from Bar Ilan University, where he wrote his dissertation on peacemaking in the Jewish and Muslim traditions. He also holds Orthodox rabbinic ordination from Yeshivat Har–Etzion, one of the leading Modern Orthodox higher academies for Jewish learning in Israel, where he studied for 8 years when he was younger.

Roth began as Director of Mosaica about a year ago. During the last few months, Roth and his team underwent a serious and substantive strategic planning process, which now enables them to continue and upgrade the work of religious peacebuilding in Israel and the region in new and significant ways. I recently interviewed him about these new developments, which hold great promise for the future of religious peacebuilding in our area.

Firstly, I was greatly inspired to learn that the Religious Peace Initiative had done some amazing things even during the coronavirus pandemic in Israel.  Through the excellent leadership of Sheikh Raed Badir, who directs the Adam Center in Kafr Kassem, several very important fatwahs (Muslim religious decrees) were issued in order to convince Muslim religious leaders in Israel and beyond to shut down their mosques. According to Rabbi Roth:

The role of Muslim religious leaders in helping to shut down the mosques had played a critical role in this pandemic.  Through the leadership of Sheikh Raed, it became clear how Islamic Law can play a constructive role in creating a moral and healthy society within an Islamic context. Sheikh Badir follows in the footsteps of Sheikh Abdallah Nimer Darweish, who was his teacher and mentor, who placed a strong emphasis on saving lives both in the context of peace and in moments of crisis such as we find ourselves today.

Sheikh Badir is a senior religious authority who has written many books and issues many religious rulings pertaining to Islamic Law. He is a member of the Shura Council of the Association of Scholars and Preachers in Palestine, based in Al Quds Al-Sharif and active in interreligious dialogue for peace. He was recently interviewed about his work in promoting health and harmony during the coronavirus pandemic by a major television network        which reflects his willingness to go public on this issue. He is one of the key Muslim partners in this religious peace initiative but not the only one. Indeed, he and others are bringing more and more influential Islamic leaders into this process in recent years, often below the radar, but sometimes above it as in the case of the recent fatwah to keep the mosques closed during the pandemic.

I asked Roth what keeps him going. Why does he persist in the search for peace? He was a bit surprised by my question, since it was obvious to him that this is inherent to Judaism. He put it this way to me:

We are a religion and a people who have been around for thousands of years and we have seen the worst. We cannot give up on peace. There are new opportunities when things get stuck, when we are at the depths of despair. This is one of those times. We need some out-of-the-box thinking. I believe that religious leaders have a special role to play at this time, especially since it is becoming more and more evident that religion plays a key role in sustaining the conflict.  If part of the ailment is religion, then part of the ‘vaccination’ or ‘cure’ to the conflict must also include religion.

In the light of their strategic planning process, which was led by Meredith Rothbart and Basher Abu Baker, co-directors of Amal Tikva that works particularly with helping Israeli-Palestinian peacebuilding NGOs, Roth and his colleagues are beginning new initiatives, even in these very challenging times. They are engaging Jewish and Muslim religious leaders not only at the highest levels, but also at the community levels of leadership. They are developing plans to bring their work into the community—in Muslim communities and in Jewish religious communities throughout Israel and beyond.

Roth referred to himself as a “determined optimist.” This flows both from his religious faith and from what he is experiencing in his dialogues with Muslim religious leaders:

When I see the impact of the quiet back-channel meetings that have been happening off-the-record in recent years, I can overcome despair and it helps me remain optimistic.

Among the new programs that the Religious Peace Initiative is developing is one for religious leaders as mediators in mixed Muslim and Jewish cities s in Israel. In addition, new academic research about the work of the Mosaica’s senior religious mediators over the last twenty years is underway which will also help connect between theory and practice, to inform the practitioners in the field as to how they can have a greater impact in their work.

Is peace possible? Can religious leaders help in achieving it, contrary to the stereotypes about them in our region? Perhaps, but it will take time. It does seem evident that without engaging senior religious leaders that directly impact the conflict today, peace will take even longer.

In the meantime, the courageous and far-sighted work of this unique program called the Religious Peace Initiative offers some hope and inspiration for the future. This is very much needed at this juncture in history, when too many people are mired in despair and apathy. Rabbis Melchior and Roth, along with Sheikh Badir, and their colleagues, are paving the way for a better future for their communities and for Israeli and Palestinian societies.

[This post is part of a series on “Peacebuilders” that I have been writing during the past few years, about people and organizations in Israel and Palestine who have not given up on pursuing peace.]