The Blogs
Ralph Buntyn
Apply for a Blog
Advertisement
Please note that the posts on The Blogs are contributed by third parties. The opinions, facts and any media content in them are presented solely by the authors, and neither The Times of Israel nor its partners assume any responsibility for them. Please contact us in case of abuse. In case of abuse,
Report this post. 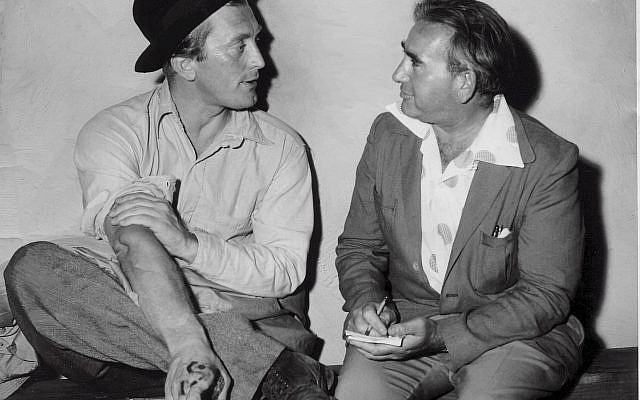 A young Kirk Douglas is seen being interviewed by journalist David Horowitz in 1949.

“My father, who had been a horse trader in Russia, got himself a horse and a small wagon, and became a ragman, buying old rags, pieces of metal, and junk for pennies, nickels, and dimes…. Even on Eagle Street, in the poorest section of town, where all the families were struggling, the ragman was on the lowest rung on the ladder. And I was the ragman’s son.”

1953 ushered in a new United States presidential administration. With the transition from Harry Truman to Dwight Eisenhower, the U.S. began to distance itself from Israel, seeking to follow a more even-handed policy on the Arab-Israeli conflict.

United Nations Journalist David Horowitz, serving as a Special Correspondent for “The Voice,” a Los Angeles publication with the largest Jewish circulation in the West, was in Israel to write a special report on the progress being made by the young State learning to live a new life of self-determination. During the same time a young U.S. born actor, the son of Jewish immigrants from Russia, was in Israel on location for the filming of “The Juggler,” a drama about a survivor of the Holocaust.

The young actor, born Issur Danielovitch in 1916 in Amsterdam, New York to Herschel and Bryna Danielovitch, led an impoverished childhood with his immigrant parents and six sisters. His father’s brother, who emigrated earlier, used the surname Demsky, which the family adopted in the United States. The young actor grew up as Izzy Demsky.

Before entering the United States Navy during World War II, he would legally change his name yet a third time. This time he would be known by his stage name: Kirk Douglas.

Douglas made his film debut in 1946 co-starring opposite Barbara Stanwyck in “The Strange Love of Martha Ivers.” He appeared in 16 more films from 1947 until he played the role of Hans Muller in “The Juggler” filmed on location in Israel in 1953. It wasn’t the first time Kirk Douglas and UN Journalist David Horowitz were in Israel at the same time.

Douglas became an international star for his leading role as an unscrupulous boxing hero in “Champion” (1949), which brought him his first nomination for the Academy Award for Best Actor. While in Israel he first met and was interviewed by Journalist David Horowitz. Both were Jewish sons of immigrants and held much in common. Douglas openly discussed his Jewish upbringing and revealed that growing up his family primarily spoke Yiddish at home.

Douglas spoke of the hardships that he, along with six sisters and his parents, endured during their early years in Amsterdam, New York. Growing up, Douglas sold snacks to mill workers to earn enough to buy milk and bread to help his family. Later, he delivered newspapers and during his youth he had more than forty jobs before becoming an actor. He found living in a family with six sisters to be stifling: “I was dying to get out. In a sense, it lit a fire under me.”

After acting in plays in high school, he knew then he wanted to become a professional actor. Unable to afford the tuition, Douglas talked his way into the dean’s office at St. Lawrence University and showed him a list of his high school honors. He received a loan that he repaid by working part-time as a gardener and a janitor. He was a standout on the wrestling team and wrestled one summer in a carnival to make money.

Douglas’s acting talents were noticed at the American Academy of Dramatic Arts in New York City, which gave him a special scholarship. One of his classmates was Betty Joan Perske (later known as Lauren Bacall), who would play an important role in launching his film career. Bacall later revealed that she “had a wild crush on Kirk,” and they had dated casually. Bacall helped him gain his first film role by recommending him to producer Hal B. Wallis, who was looking for a new male talent. Wallis’s film “The Strange Love of Martha Ivers” (1946), with Barbara Stanwyck, became Douglas’s debut screen appearance.

Kirk Douglas appeared in more than 90 movies during a 64-year acting career.  He was nominated for three Academy Awards and in 1996 received an Honorary Award for 50 years as a creative and moral force in the motion picture community. He was nominated for or won four Golden Globe Awards, three Emmy Awards, an Oscar for lifetime achievement and the Presidential Metal of Freedom.

Douglas considered himself very fortunate to have lived to accomplish so much. If he had not heeded wife Anne Douglas‘s advice, he would have been on producer Mike Todd‘s private plane in 1958 when it crashed and killed all on-board. Todd’s wife Elizabeth Taylor was also scheduled to be on the plane but canceled due to a bad cold. Douglas later barely survived a helicopter crash in 1991.

Although Kirk Douglas is best known as a film star, he also had a distinguished career as an author of both non-fiction and fiction. He has written ten novels and memoirs, including his best-selling autobiography “The Ragman’s Son,”(Simon & Schuster, 1988), from which the opening quote was taken.

Kirk Douglas passed away this week, exactly two years ago, at the age of 103. The centenarian of the cinema, one of the last living people of the industry’s Golden Age, was a classic rags-to-success story rising from “The Ragman’s Son” to become a bonafide superstar. Hollywood couldn’t have written a better script.

About the Author
Ralph Buntyn is a retired marketing executive for a Fortune 500 company. He is executive vice-president and associate editor for United Israel World Union, a 78 year old Jewish organization dedicated to propagating the ideals of the Torah faith on a universal scale. An author and writer, his articles and essays have appeared in various media outlets including The Southern Shofar, The Jerusalem Post, and the United Israel Bulletin. He is the author of "The Book of David: David Horowitz: Dean of United Nations Press Corps and Founder: United Israel World Union."
Related Topics
Related Posts
Comments