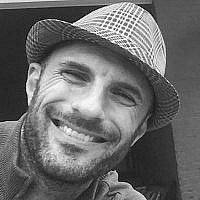 The Blogs
Avi Jorisch
Apply for a Blog
Advertisement
Please note that the posts on The Blogs are contributed by third parties. The opinions, facts and any media content in them are presented solely by the authors, and neither The Times of Israel nor its partners assume any responsibility for them. Please contact us in case of abuse. In case of abuse,
Report this post.

There are an estimated 6 million wheelchair users in the United States and Europe, some of whom could walk again if insurance carriers would approve the cost of coverage for a device innovated in Israel. Not only would underwriting this coverage allow paraplegics to regain a sense of autonomy and dignity; it also makes financial sense to give this underserved segment of society freedom of movement.

The story begins in 1996, when Amit Goffer, an accomplished academic who studied electrical and computer engineering in Israel and the United States, fell off an all-terrain vehicle and snapped his neck. Goffer became a quadriplegic, losing the ability to move the vast majority of his body, including his arms and legs. Life in a wheelchair, he felt, wasn’t enough, and Goffer became obsessed with finding a solution. He was confident he could invent a new type of device to help the disabled.

About a year after his injury, an idea came to him while he was surfing the Internet: the disabled could perhaps walk again using a shell, or exoskeleton. Animals such as porcupines and scorpions do it all the time.

Seven years later, Goffer finished building his first device: a lightweight, motorized support suit with rechargeable batteries that hugs users’ legs, along with crutches to stabilize them as they walk. Users wear a remote control on their wrists to control their movement. As they walk, a tilt sensor ensures that the chest remains upright and balanced, allowing them to move without falling. The crutches help people go upstairs and also stabilize their weight. Goffer called his innovation ReWalk.

Today, ReWalk has been approved for sale in Europe and the United States. There are roughly 400 users around the globe, including a number of U.S. military veterans and law enforcement officials. And the company is publicly traded on the New York Stock Exchange.

Yet ReWalk – and its competitors – still have a number of critics. One reason is potential safety concerns. It generally takes somewhere between 12 and 15 sessions to learn how to use the exoskeleton. Some patients, depending on their level of paralysis, never master the skill. The device can be risky. Paraplegics have very weak bones, so ReWalk encourages patients not to use the device on slippery, sloped or uneven surfaces.

Another challenge is price. Because ReWalk costs approximately $70,000, many who could benefit from using it cannot afford it. Most health insurance providers in the United States have declined to cover it.

But ongoing research shows definitively that the exoskeleton can alleviate symptoms that are common among the wheelchair-bound and over time, reduce healthcare-related costs.

Dr. Alberto Esquenazi, the chairman and chief medical officer of Moss Rehab of the Einstein Healthcare Network in Philadelphia, screened 14 subjects, completed training for 10 ReWalk users, and determined that some users reported “improvements in pain, bowel and bladder function, and spasticity.” His study also determined that users “improved their physical endurance” with “no significant adverse side effects” and were willing to use the system on a regular basis.

In 2014, the U.S. Department of Veterans Affairs agreed to pay the cost of exoskeletons for eligible veterans with spinal cord injuries. This is a “historic move on the part of VA,” said Dr. Ann Spungen, associate director of the VA’s Center of Excellence for the Medical Consequences of Spinal Cord Injury. “It represents a paradigm shift in the approach to rehabilitation for persons with paralysis.”

And in June 2017, a Florida court ruled that Blue Cross Blue Shield of Florida must provide coverage of a ReWalk exoskeleton system for a plan member with a spinal cord injury, citing “persuasive evidence,” including current clinical studies and medical literature, that “exoskeletons (including the ReWalk) are no longer ‘experimental or investigational.’”

Goffer and other experts believe insurance providers could save approximately $30,000 per patient annually due to ReWalk’s health benefits. Dr. Arun Jayaraman, a leading exoskeleton expert at the world-renowned Rehabilitation Institute of Chicago, estimates the savings might even be higher, as regular exercise using the device could also help patients. If insurers would cover the device, Goffer and others in his field say, that would lead to more users, and likely more competitors, all of which would push costs down even more.

But until the cost of this device comes down significantly, health providers will be the ultimate arbiters of who has the right to walk again. Let’s hope they choose to give the wheelchair-bound the ability to look at their loved ones at eye level – something most people take for granted. Not only is it the right thing to do, it is in everyone’s financial interest.

Avi Jorisch is the author of Thou Shalt Innovate: How Israeli Ingenuity Repairs the World (Gefen Publishing). He is also a Senior Fellow at the American Foreign Policy Council and The Israel Project.

About the Author
Avi Jorisch is a seasoned entrepreneur and Middle East expert. He is a Senior Fellow at the American Foreign Policy Council and the author of Thou Shalt Innovate: How Israeli Ingenuity Repairs the World.
Related Topics
Related Posts
Comments