The Blogs
Alex Lederman
Apply for a Blog
Please note that the posts on The Blogs are contributed by third parties. The opinions, facts and any media content in them are presented solely by the authors, and neither The Times of Israel nor its partners assume any responsibility for them. Please contact us in case of abuse. In case of abuse,
Report this post. 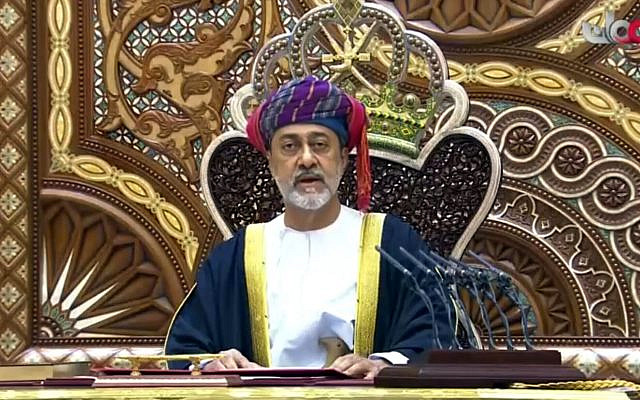 In the wake of the Abraham Accords, through which Israel established full diplomatic relations with the United Arab Emirates and Bahrain, all eyes are now on Saudi Arabia. A preeminent regional power, the Kingdom is seen as the counterweight to a destabilizing Iran and the crown jewel of potential Israeli allies. The Saudi-Israel normalization question continues to dominate the news cycle following Prime Minister Netanyahu’s secret meeting with Saudi Crown Prince Mohammed bin Salman. Another Gulf nation, however, is quietly mulling its own accord with the Jewish state. That country is the Sultanate of Oman.

Oman might not be as alluring as Saudi Arabia, but Israel would reap both practical and symbolic benefits by establishing ties with the Sultanate. Israel ought to take Oman seriously as a potential regional partner — and there is reason to suggest that Oman may be ready to reciprocate.

Oman stands apart in a region shaped by competing alliances and endless proxy wars. It enjoys cordial relations with all of its neighbors and is respected internationally as a force for stability and peace. An integral partner to its fellow Gulf Cooperation Council states, Oman has fought to keep the GCC together after Saudi Arabia, the UAE, and Bahrain cut ties with Qatar in 2017. The Sultanate maintains a close alliance with the US, but its credibility in Tehran helped bring the Iranians to the table to negotiate the JCPOA nuclear deal. Similarly, Oman has served as a diplomatic back channel to the Houthi rebels in Yemen, even as its Saudi and Emirati allies carried out a brutal and unsuccessful military campaign to oust them.

In short, Oman does not conform to conventional notions of how alliances in the Middle East work. Rather than falling into the orbit of Saudi Arabia or Iran, Oman plays a unique role as friend to all, enemy to none. It is only natural that this “all” include Israel.

Oman does have a history of limited cooperation with Israel. Several meetings between Israeli and Omani officials took place in the 1990s, beginning with Prime Minister Yitzhak Rabin’s historic visit with Sultan Qaboos bin Said in Muscat — the first known trip of an Israeli leader to the Gulf. In 1996, the countries agreed to open trade missions and collaborated in opening the Middle East Desalination Research Center in 1997. Although Oman rolled back its engagement with Israel amid the Second Intifada in 2000, the question of Oman-Israel relations reemerged in 2018 when Netanyahu met with Sultan Qaboos.

Oman’s tepid engagement with Israel has stopped short of full recognition, and Oman has not openly expressed interest in full diplomatic relations. Following the Netanyahu-Qaboos meeting, Omani Foreign Minister Yusuf bin Alawi reiterated the Sultanate’s commitment to a solution to the Palestinian problem prior to normalization with Israel. This position is consistent with the Arab Peace Initiative endorsed by the Arab League in 2002, which conditioned recognition of Israel on a negotiated two-state solution.

However, the UAE, Bahrain, and Sudan, all signatories of the Arab Peace Initiative, disrupted this status quo when they normalized relations with Israel this year. Oman, therefore, may feel liberated from the API as a precedent and decide that having relations with Israel and the PA may better position it as a mediator in the conflict. Oman’s track record with the JCPOA is a testament to its ability to bring sworn enemies to the table. Normalization with Israel would curry favor in Washington, but Oman also has a genuine interest in promoting Israeli-Palestinian peace. The newly-minted Sultan Haitham bin Tariq is likely eager to prove himself as a statesman and respected moderator in Qaboos’ image.

While the Palestinians and their allies have chastised the UAE, Bahrain, and Sudan for “betraying” their cause, Oman could mitigate damage to its credibility by requesting an Israeli concession on the Israeli-Palestinian front. In exchange for normalization, Israel could implement a comprehensive settlement freeze or even a small-scale transfer of Area C territory to the Palestinian Authority. Oman could also insist on including clear language in support of the two-state solution in the agreement.

On the Israeli side, assuming Netanyahu retains the premiership in the near future, it is difficult to say whether he would see such an arrangement as worth the political blowback from his pro-annexation base. Oman would likely not embrace Israel without an Israeli concession, lest it alienate the Palestinians. Unlike the UAE, for whom Netanyahu agreed to “suspend” annexation, Oman is not on most Israelis’ radar as a regional player. However, as Netanyahu considers his legacy and reputation as a highly competent statesman, it behooves him not to overlook the Sultanate. The aforementioned concessions are not inconsistent with the Trump Plan, which Netanyahu endorsed. Indeed, previous right-wing prime ministers have given up more for less.

Normalization with Oman has unique benefits to offer Israel. At this point, the Arab countries that have relations with Israel all fall within the pro-Saudi bloc, united in its opposition to Iranian imperialism. Mutual fear of Iran has naturally drawn these nations closer to Israel, thereby cementing Israel’s place as a part of a regional alliance alongside pro-Western “moderate” Sunni Arab states.

Though this alignment does benefit Israel, it only goes so far to integrate it into the Middle East. An anti-Iran alliance between Israel and a few Arab countries is unlikely to broaden public acceptance of Israel in Arab societies.

Oman, however, an independent player not beholden to Riyadh, is in a unique position to do so. Mutual fear of Iran would not be a factor in Oman-Israel normalization, as Oman has no quarrel with Iran. Oman and Iran have robust diplomatic and economic ties and Sultan Haitham appears poised to continue the friendly relations established under Qaboos. Oman-Israel normalization would enhance cooperation and dialogue throughout the region, rather than escalate tensions. Indeed, Oman would likely serve as a backchannel from Israel to Iran and Hezbollah.

Oman, home to the lesser-known Ibadhi branch of Islam, would also be the first Arab state with a non-Sunni regime to normalize with Israel. An Israel-Oman agreement would cement Israel’s status as an accepted part of the Middle East, beyond sectarianism and partisan geopolitics, while signaling to the Palestinians that the Arab world at large is disillusioned with their intransigence. It would, in essence, normalize normalization.

Following an Israel-Oman accord, the Saudis might feel more comfortable bringing their covert ties with Jerusalem out into the open. Kuwait and Qatar, two other Gulf states that do not always toe the Saudi line, might also consider doing so. Embraced by all six GCC states, Israel will have truly begun to cast aside its status as a Middle Eastern pariah.

Up to this point, security concerns have dominated the Arab-Israeli normalization process. Israel’s under-the-table ties with the Gulf that preceded the Abraham Accords never would have materialized in a world without the Iranian threat. Israel’s relations with Egypt and Jordan hardly qualify as “normal,” with minimal civilian contact and distrust running deep. If Israel truly wants to become an integrated part of the Middle East, it needs to look past obvious military alliances and reach beyond the Saudi orbit.

Oman, the uncontroversial friend-to-all and the bridge across the geopolitical aisle, is the obvious place to start. All Middle Easterners stand to gain from greater cooperation and dialogue with Israel, an economic powerhouse with a dynamic population and the will to thrive against all odds. It is only inevitable that Oman, and other Arab nations who have no quarrel with Israel, welcome the Jewish state as a rightful member of the Middle Eastern community.

About the Author
Alex Lederman is the National Organizing Fellow of IPF Atid, the young professionals program of Israel Policy Forum. He graduated from Yale University with a BA in Near Eastern Languages and Civilizations and served as an intern at the US Embassy in Muscat, Oman.
Related Topics
Related Posts
Comments