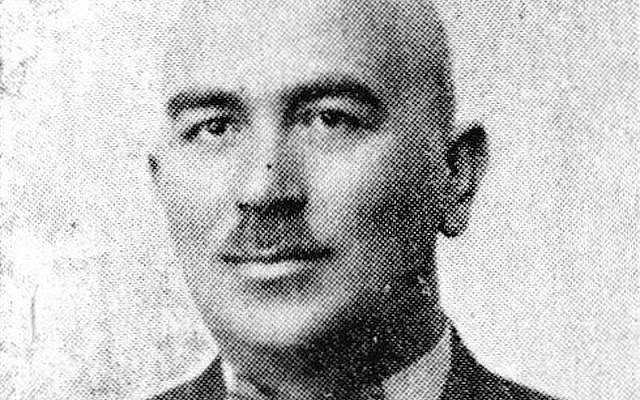 Dr. Traian Popovici was the mayor of Cernăuţi , a town that was under Romanian control during WWII. Nowadays the city is part of Ukraine and known as Chernivtsi. From his post, he was responsible for saving around 20,000 Jews of Bukovina from deportation during the Holocaust.

Every October 9th, Romania officially marks the National Day of Commemorating the Holocaust, coinciding with the beginning of the deportation of Jews to Transnistria. So far, 69 Romanian women and men have been recognized as Righteous among the Nations and Dr. Popovici and Queen Mother Elena were among the most prominent ones.

Dr. Popovici was born 129 years ago, on October 17, 1892, in the village of Russi Manastioarei, in the Duchy of Bukovina, in the Austro-Hungarian Empire. At the end of WWI he graduated as a lawyer from the University of Chernowitz and worked as such in Cernauti between the two great wars. When the Soviets invaded Bukovina in June 1940, he fled to Bucharest where he continued to work as a lawyer.

The notorious dictator Ion Antonescu asked him to become mayor of Cernăuţi, a request he initially turned down as he did not want to serve under a fascist government. However, persuaded by friends, he eventually changed his mind and accepted the nomination. A few days later, he was ordered by the central government to create a ghetto for the Jews of Cernauty but he refused to comply.

In 1941, the new governor ordered the deportation of all the Jews of Cernăuţi to Transnistria. Dr. Popovici challenged the order. He wrote a poignant letter to the governor. Here is an excerpt:

The French revolution that gave mankind the gift of justice and freedom took a toll of 11,800 while with the winter coming soon you are sending 50,000 to their deaths….Do you really want to go down in history along with someone like Robespierre? I for one do not want history to soil my name. Think about it. There’s still time. Get in touch with the Marshal [Antonescu] and entreat him, in your capacity as governor, to at least put this off until the next spring.“

The governor acquiesced to exempt 200 Jews only from deportation but Popovici did not give up and managed to reach Antonescu himself, arguing that the expulsion of the Jews would be a mortal blow to the economy of the region. He succeeded in securing a postponement which resulted in the saving of some 20,000 Jews.

His courageous stance earned him the title of Righteous Among the Nations in 1969.

After the war, he wrote his memoirs, Confession of Conscience, in which he admitted having contemplated the possibility of resigning the post of mayor, but he felt he could not abandon the Jews in their plight.

His life-saving efforts had cost him his job. In 1942 he was accused of granting unnecessary permits to Jews. He was sacked and returned to Bucharest.

Dr. Popovici passed away in 1946 and only in 2000 was he officially recognized by Romania when the Municipality of Bucharest passed a resolution to name a street of the capital after him.

Dr. Popovici was a remarkable human being. His heroic legacy will live on forever.