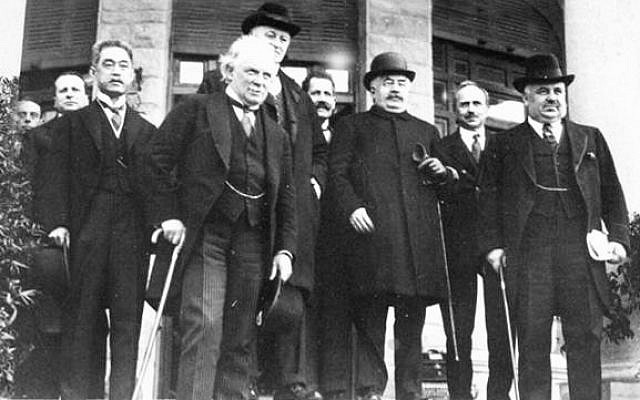 The centenary of the San Remo Conference — to be marked this week — is an excellent opportunity to remind ourselves that the propaganda trumpeting of  “illegality,” which Zionism and its fulfillment have been facing throughout this past century, is itself an illegitimate mobilizing meme. It is simplistic but it does succeed in ensnaring simple minds.

Already in 1936, W. F. Boustany published a tract, mustering legal arguments, claiming the Palestine Mandate was invalid. Tawfiq Canaan also promoted this line of argument that same year which, at its foundation would assert that Britain committed an illicit act in advancing Jewish rights in the Land of Israel. Much latter, Henry Cattan further developed this approach which includes negating Jews as a nation, with no rights, as aliens to the country and so forth.

To briefly trace the short few years of the series of diplomatic gatherings which preceded and then followed the defeat of Turkey, the Ottoman Empire, in World War One, we can start at the November. 9, 1914 British Cabinet meeting when the “ultimate destiny of Palestine” was deliberated. In other words, within some two months it was an agenda item for the England that Palestine was to emerge from the conflict with a new identity, one, given the talks and discussions held between Zionists and leading politicians.

Shortly thereafter, on January. 28, 1915, Hebert Samuel presented his “Future of Palestine” Memorandum to Prime Minister Asquith which suggested to establish a Jewish centre in Palestine.

On November 2, 1917, the Balfour Declaration was presented to Baron Rothschild as the representative of the Zionist Organization. But that was, of course, an internal British policy statement.

With the Ottoman Empire`s defeat and the end of the World War, a Peace Conference was convened at Versailles and on February. 2, 1919, the Zionist delegation submits its proposal  “to reconstitute the Jewish National Home ” in Palestine. This is followed by a London Conference that began in February 1920. Its main purpose was to arrange for the partitioning of the Ottoman Empire.

And on April 25, 1920, the Allied Supreme Council continued their discussions at San Remo. Among the attendees were British Empire: David Lloyd George, Prime Minister; Lord Curzon, Secretary of State for Foreign Affairs. France: Alexandre Millerand, President of the French Council of Ministers; Philippe Berthelot. Italy: Francesco Saverio Nitti, Prime Minister. Japan: Matsui Keishirō. The United States of America had an observer presents as President Woodrow Wilsons representative). This was a roster of the most prominent of the world`s elected representatives who,as they described themselves, were the liberators of the peoples and lands of the Ottoman Empire as Clemenceau wrote in his November 9, 1918 letter.

In short, the Conference decided that a Mandate of Palestine be awarded to Gt. Britain. That was effected* formally when, on July. 22, 1922, the League of Nations decided that Gt. Britain be the Mandatory Power over Palestine with the express aim of reconstituting the establishment in Palestine of a national home for the Jewish people, recognizing the historical connection of the Jewish people with Palestine, securing the co-operation of all Jews who are willing to assist this goal, facilitating Jewish immigration and encouraging, in co-operation with the Jewish agency, close settlement by Jews on the land. On September 29, 1923, the Palestine Mandate finally took effect.

Was the San Remo Conference but a mechanical conclusion to the Great War? Or more? In the British Parliament, MP Palmer, on April 26, was anxious to know if there was any truth in the statement that Palestine has been given back to the Jews. The discussion of the Prime Minister`s statement in Parliament on April 29 is quite interesting. His words are forthright:

the mandate for Palestine has also been given to Great Britain, with a full recognition of the famous Balfour declaration in respect of the Jews.

As my late friend Howard Grief thought and later included his theory in his book, The Legal Foundation and Borders of Israel under International Law,  the title of sovereignty over Palestine was implicitly and exclusively vested in the Jewish People as a result of the decision adopted at the San Remo Conference. He pointed out that France has wished to add the phrase “political rights” as applicable to the non-Jewish communities of the country rather than just the “civil rights” which appears in the Balfour Declaration and included in all the subsequent decisions undertaken, but that was not to be.

He was followed by Dr. Jacques Gauthier, who asserted,

“The San Remo resolutions adopted by the Principal Allied Powers on April 25, 1920, established the territorial rights of the Jewish People under international law in respect to Palestine. The sovereignty entitlements granted by the historic San Remo Conference of 1920 remain in force to support the legal claims to the lands for the State of Israel and the Jewish People.”

Looking back to the events of a century ago and the actual intentions the then international community, it is obvious that attempts to undermine the legitimate and legal national rights of Jews and of Israel were set out firmly and unabashedly. Are they in Israeli schoolbooks? Is all this contained in programs of the various Jewish groups supposedly providing support for the beleaguered Jewish university student on campus?

The time has come to do more to highlight the importance of April 25, 1920.

* While Article 95 of the Treaty of Sèvres was the next international contractual agreement to follow San Remo, signed on August 10, 1920, which also adopted the main principles of the British Balfour Declaration regarding Palestine as fixed in the San Remo Agreement (that the High Contracting Parties agree to entrust the administration of Palestine to a Mandatory to be selected by the said Powers; that the Mandatory will be responsible for putting into effect the Balfour Declaration in favour of the establishment in Palestine of a national home for the Jewish people, and that nothing shall be done which may prejudice the civil and religious rights of existing non-Jewish communities in Palestine), it was never ratified by Turkey. Mustafa Kemal had led a revolt to replace the Turkish government. A new treaty was arranged, the 1923 Treaty of Lausanne. By that time, the League of Nations had already awarded Gt. Britain the Mandate over Palestine.