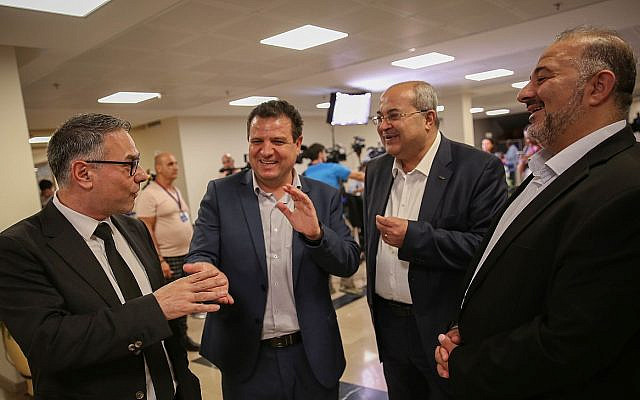 The Times of Israel reported that, “The inclusion of Ra’am, an Islamist political party, in the current government has drawn consistent attacks from the right-wing opposition, accusing the coalition of being unable to oppose terrorism”. Interesting.

This is, ironically, the same right-wing opposition that is strongly supportive of more settlements in the West Bank. The interesting part is that they don’t seem to see the irony of their position. They don’t see that the more settlements are built deep into the West Bank, the more likely the West Bank will one day become part of a greater Israel leading to a sharp increase in the number of Arab citizens of Israel, and they don’t see that the larger the Arab population of Israel is, the more likely Arabs will be part of the government.

If these right-wing opponents of Israel’s current government don’t want Ra’am (a party whose leader has steadfastly denounced terrorism and terrorist groups like Hamas) to be part of an Israeli government, how do they expect to form a government when nearly half of Israeli voters are Arab? It is a mystery.

I tried to solve this mystery by discussing this subject with those who are enthusiastic supporters of more and more settlements in the West Bank.

One explanation that I was given is that Arabs will have to swear a pledge of allegiance to Israel before becoming citizens. After the pledge, Arab Israelis will magically be incapable of voting for candidates who wish to strengthen the position of Israeli Arabs by, for example, abolishing the Jewish right of return, accepting Palestinian refugees, and incorporating Gaza into Israel.

Another explanation that I was given is that Arabs will be taught in Israeli schools and through Israeli media to support Israel, also leading to some magical transformation in their minds that will prevent them from voting for politicians who wish to make Israel more Arab than Jewish.

It seems that the mystery consists of believing that the greater binational Israel that results from settlement extremism would somehow magically function as if it was a Jewish state. This delusion relies on Arabs currently seen as terrorist supporters being magically transformed into pro-Zionist citizens who will behave like Jewish Israelis.

Yet another explanation that I was given is that Arabs in the West Bank will not be given Israeli citizenship, making Israel officially an apartheid state while Israel is magically shielded from any international condemnation, including America’s.

I was also told that Arabs in the West Bank will be relocated to an Israeli colony on Planet Mars. Okay, I made this one up, but it isn’t much more far-fetched than the other explanations.

The reality is that those who support more and more settlements in the West Bank rely on a lot of magic and not on rational reasoning. They certainly don’t think beyond the status quo, as if the status quo could last forever.

The fact that the Palestinians have so far been incapable of forming a credible position that would lead to a two-state solution has hurt the Palestinians tremendously, but it has also weakened Israel by misleading many Israelis into thinking that the status quo will last forever so they don’t have to plan for what comes next.

This lack of foresight has transformed the West Bank into Swiss cheese so that it could never become part of a Palestinian state unless over 140,000 settlers moved to Israel or became Palestinian citizens, which is totally disconnected from reality (according to the Jewish Virtual Library, “an agreement to dismantle the settlements outside the blocs would require the removal of more than 140,000 people”). Very few of these settlers would feel safe enough within a Palestinian state, if the new state even agreed to keep them. And that number keeps growing.

There is a wide range of opinions among Israeli Arabs. Only a small minority resides in the two extremes (model pro-Zionists or terrorist supporters). The vast majority simply want better lives for themselves and for their Palestinian cousins, so they would naturally press for policies such as less Jewish immigrants, more Arab immigrants, and the incorporation of Gaza into Israel. It is in their best interest to do so, even if they bear no ill will towards Jews. Adding more Israeli Arabs who are currently Palestinians living under Israeli occupation would certainly not improve this picture.