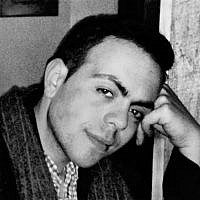 The Blogs
Mordechai Moseson
Apply for a Blog
Please note that the posts on The Blogs are contributed by third parties. The opinions, facts and any media content in them are presented solely by the authors, and neither The Times of Israel nor its partners assume any responsibility for them. Please contact us in case of abuse. In case of abuse,
Report this post.

Over the course of the past few weeks, here in Israel, a spotlight has been cast upon the so-called “Chilul Shabbat” as it relates to the construction of the Tel Aviv rail line. Prime Minister Netanyahu was pressured by Charedi party leadership to formally cease the construction work taking place on Shabbat, thus unleashing a fire-storm of chaos. The very next day, Israel’s entire commute system was in gridlock and many people could not get to work; soldiers also found great difficulty in returning to their bases on Sunday. Thankfully the Supreme Court intervened and declared that the government does not have the power to enforce the cancellation of said construction.

This is but one example of the constant struggle that Israeli society experiences as it professes to be a true democracy, while paradoxically being highly influenced by religious law. The issue of religious political representatives in government trying to influence all aspects of normative law has reached a fever pitch, and unfortunately they will not back down any time soon.

The real motivation behind writing this piece is to address the Charedi establishment. Make no mistake, the rabbis and political leaders in the Charedi community control the rhetoric on the ground. What they say becomes the “word” of God, and the Charedi population accepts it without question. Unfortunately, the average Charedi Jew is a victim; a powerless subject of the “ruling” rabbinical class. The Charedi population should not be villanized, but rather they should be viewed with empathy, as they are manipulated by a very powerful and rigid Sofitel hierarchy.

I say to the Charedi leaders directly — something is very wrong with your actions and words. Since the founding of the state of Israel, the official Charedi position is that Zionism is “anti-Torah” and does not represent Judaism. Well that begs the question why are you even participating in the government in the first place if you question its validity? But, I get it, you are using the system to your benefit, isn’t that what politics are all about? However, if you believe that the modern State of Israel is not Jewish, then why are you imposing Jewish laws onto the her? Not only laws, but laws that don’t even affect your community?? No, it is not your responsibility or right to enforce “God’s laws” in a vastly secular country, in fact the opposite is true. You obviously know that in “galut” Jewish law forbids you from disobeying the government under which you live. Maybe you truly believe that Israel is in fact a Jewish state, and if that is the case then all the arguments against serving in the IDF are moot. You cannot have it both ways, pick one position and stick to it. You know full well that if a Talmudic discussion were to take place on these issues, your arguments about “Chilul Shabbat”, army service, and the like would hold very little weight, if any at all.

In essence, this isn’t about religion and Judaism, the truth lies in something entirely different – it is purely about power. The Charedi establishment is like any other leadership that needs to keep its constituents feeling taken care of in order to maintain its influence. That seems to be working very well in the establishment lately, however the general public must not be fooled and must stand up to the unwarranted power of the Charedi leadership. There is only one way that this can truly happen – it is now time for Israel to separate religion from its governing body, in other words, “Separation of Church and State”. The intricacies of how that can be implemented are for another post, but make no mistake, it can be done; in fact it must be done to preserve Israel’s democracy. The Jewish identity of Israelis are strong, yet their religious identity is not. Even though the fear mongers who sense impending loss of influence may lead us to believe otherwise, this nationalistic brand of Jewish identity cannot be compromised, it is deeply embedded into the Israeli archetype and woven into the fiber of Israeli society.

Every Israeli citizen deserves the basic rights afforded citizens of a democracy: the right to education, to freedom of choice, freedom of speech, and yes – freedom of religion. In order to have the freedom to practice religion (or abstain for that matter) as an individual sees fit, religion must be unequivocally separated from the government. Israelis are entitled to a system of laws that are based in modern-day civil norms and not in ancient texts that are no longer relevant.

About the Author
I am a Zionist with a background in social activism, Israel advocacy, and a degree in psychology and Judaic studies. I grew up in an ultra orthodox community in Brooklyn new, York.
Related Topics
Related Posts
Comments