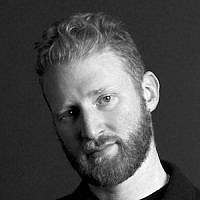 The Blogs
Elliott Leigh Tucker
Actor Artist Creative
Apply for a Blog
Advertisement
Please note that the posts on The Blogs are contributed by third parties. The opinions, facts and any media content in them are presented solely by the authors, and neither The Times of Israel nor its partners assume any responsibility for them. Please contact us in case of abuse. In case of abuse,
Report this post. 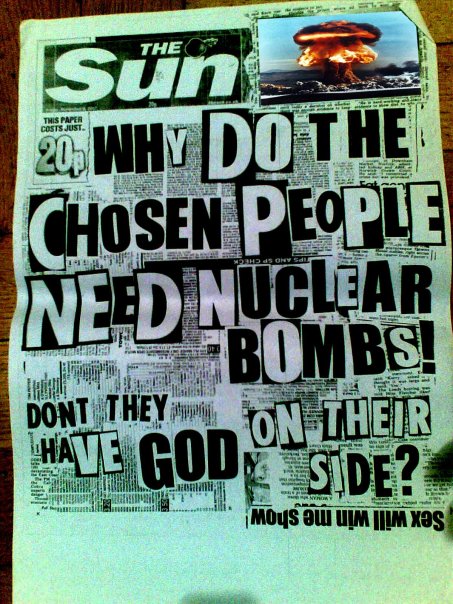 “Strengthen yourselves very much to observe and do all

that is written in the Torah of Moses, not to deviate from it right or left…

You shall be aware greatly for your souls, to love God.

these nations out from before you; they will be a snare and an obstacle to you,

a lash in your sides and a thorn in your eyes,

until you are banished from this goodly land that Hashem, you God,

has given to you.”

believes she is given an opportunity to conform to her bullying peers.

But its a trick.

Through her confusing teen angst and the shadow of religious oppression from her mother,

in a demoralised world of status…

she is deceived and awarded the title of prom queen.

And the beginning of the end is public humiliation,

when she steps up to receive her prize and then covered in a bucket of pig’s blood (causing a huge fireball of telekinetic power).

A dear past acquaintance went astray in her life to terrible consequences.

I warned her, pleaded, begged.

And the feeling of watching someone, almost in slow motion…

helplessly watching…as they choose the worst…

thinking it to be “right” (a twisted form of denial…escape)

So blinded and then disfigured,

even refusing to admit some form of truth to the experience.

It’s so awful it cannot be real.

What are we manifesting in this Land?

This Land that organically responds to the light of its people? Or lack of?

The mantra of psychoanalyst Carl Jung rang in my ears:

“You meet the shadow on the path you choose to avoid it.”

What is the shadow?

The shadow is our suppressed subconscious.

The dark side of our personality.

It is all the dark things we choose to avoid, or refuse to deal with…

The shadow manifests itself as fear and hatred,

possibly leading to oppression and abuse.

Its easier to hate than to deal with our self hatred or lack of self esteem,

all the baggage we don’t want to deal with inside ourselves.

The very operation of the shadow is to confuse us.

Its the hidden aspect of consciousness;

such as the experience of Eve in the Garden with the serpent.

Adam never seems to be there when the serpent is at play.

The forbidden fruit is eaten and everything changes.

If we fail access a deeper consciousness, deeper self awareness,

we fall. We fall deeply into our brokenness, our pain, our abuse.

Our lives becomes a weird shadow simulation of whom we could have been.

If we fail to take account, to heal or to return “tshuva,”

the shadows emerge to haunt and manipulate us. And define us.

Often we have blocks too. Blocks of fear, trauma, shame, guilt.

We can’t revisit the past. Its too painful.

So often a coping mechanism, albeit a faulty one

is to bury or hide the trauma (such as through addictions).

Or allow the shame to silence us.

A sad situation of many people

defines them, owns them.

Sitting deeper than any elements of lightness.

Without an outlet the light becomes dimmed,

smeared in a weird filter…

where in deceptive ways they act out the trauma

All this experience works on a micro level and a macro.

On a collective national level as well as the individual.

Throughout history there have been examples of huge movements of people

collectively projecting their darkness onto scapegoats.

Through projection people deny their shadow.

Projecting it onto others to avoid its lesson.

Amidst crowds this is reinforced even more.

Leading to a dark underbelly in society.

“They have provoked my jealousy with a non god…

I will provoke their jealousy with a non nation.”

from a barren land to a place bursting with life and energy.

But the deep failure has been an ability to heal,

or even to fully acknowledge its healing.

This is not about stone memorials or memorial day ceremonies,

but a deep prolonged exploration…

of all the collective trauma of the Jewish people.

And to open this Pandora’s box…

with deep respect and authenticity.

Is nationalism an answer? It feel more like rhetoric now.

Militarize ourselves to the hilt…like this answers the void.

Real nation building using the wisdom of the past.

of tzedaka, of compassion, a love of history, collective remembering, therapy and reconciliation.

We need a revolution of culture,

away from tacky sponsorship and gala.

of grassroots creativity…to revitalise the base.

But power and corruption has emerged into our consciousness.

So the military takes charge and runs the show.

Whether it is direct criminal corruption…

or confused perceptions of identity,

or a masculinated militarised zionism, with huge advanced weapons…

or perhaps a Torah covered in the slime of self righteousness,

of judgment, exclusion and zeal.

In an authentic journey of tshuva,

we only find the path to redemption through admitting our faults.

To allow ourselves to become broken and vulnerable,

to rebuild the pieces.

Self sacrifice is not needed

but then swept away 10 innocent souls by the Dead Sea.

then went under. Where is our rock?

WHAT IS OUR ROCK?

King David played at madness to escape death and persecution.

Likewise our healing will only begin to arrive

when we can burst into a different stage.

A place of freedom, creativity, of dance.

As does the epic Chabad discourse “Basi Legani.”

A dance of madness to wash away the garbage of exile.

“Shtus Kedusha”; elevating and transforming the crap to become holiness.

Meanwhile pump up our muscles to becomes hard and rigid?

To dish out justice like we own the thing?

or even to lean towards the nuclear option?

Drop a holocaust bomb on an enemy city such as Tehran

will it all go away?

Auschwitz at the press of a button.

Our enemy’s power are merely dark fragmented mirrors of our own failings.

Whether its a revolt of statelessness,

or an entire shadow republic tilted towards deception and nuclear destruction…

these are dark mirrors of our own will to power.

If we continually fail to internalize our shadow,

it returns to haunt us, taunt us.

The key to the doorway of perception…remains locked.

Real prayer when its silent,

when something clicks open up there.

to fly above the noise…

and see life from the soaring heights of the angels.

To find the path of healing, compassion, creativity, vitality…

for ourselves, for our own people.

Not to continually be seduced to foreign power systems…

casting shadows over us.

“Man toils in one place

the Torah toils for him in another.”

The cleaning of our deeper consciousness,

involves no mitzva to hate anyone, including Arabs.

If we just hate they hate us back. Black on black.

The shadow gets well fed.

Without processing our shadow, we are incomplete.

Our cracks are filled in with dark material,

Allowing the hate to define us

and to be not for ourselves.

A faulty compassion may give away needlessly.

Or neglect self defence or failing to set boundaries.

But its about not allowing the conflict, the shadowy enemy “out there”

to be our core definition of who we are.

The redemption of tshuva is through sin.

Taking the dark and twisting it around,

like a trampoline bounce. To burst up into the light.

With a tear on the cheek.

To dance and play away the shadows looming.

is a source of renewal.

The shadow can be the doorway to the self….

it opens to us a doorway to the unconscious part of our personality.

The first true stage of meeting the self.

About the Author
Elliott Leigh Tucker (aka Aleph) is an actor, artist and creative producer; appearing in Israeli TV comedies, underground theatres and has recently produced an art book "The Palace of Healing." He has been active in the Jewish community all his professional life.
Related Topics
Related Posts
Comments