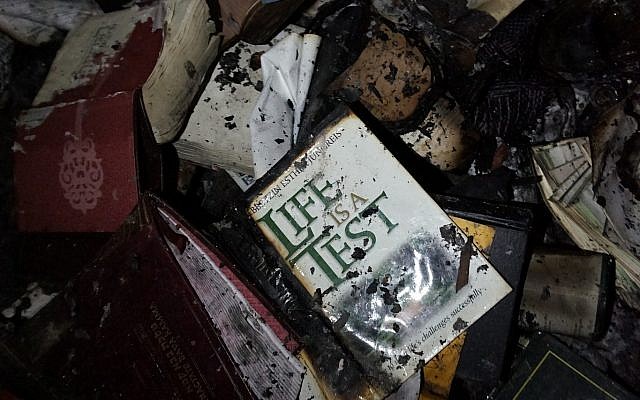 Thoughts about two events ran parallel in my mind during this February. While 80 years separate the events behind my thoughts, they share a common element: a burning synagogue.

One strand involves an editorial project I completed in February. I’ve been working with my girlfriend’s father, Eric Leiseroff, on his memoirs. He wrote them in a class over several years, and last fall I began molding them into a narrative format. When my work finished,  his daughter Naomi added photos and document scans and put the memoir into a polished design.

The memoir’s title is This Country Gave Me Life! Eric means that literally. Born in Dresden, Germany in 1925, he and his mother left Germany in June 1941 for the United States, the absolute last moment for legal immigration from the Third Reich. Only when they arrived at a New Jersey dock did they learn that Germany had invaded the USSR. The family settled in Port Chester, NY, where Eric learned English and caddied at a golf course until management discovered he was a Jew and fired him. He later joined the Army and returned to Germany as a GI and native German speaker, a highly prized skill in the last months of the war.

The memoir covers Eric’s life from the 1920s to 1946. His life intersected with history at many points. One passage looks back to November 1938, when he had just turned 13. As he wrote in the book:

Although I wasn’t raised with a strong awareness of my Jewish faith, my mother did make a point of having a bar mitzvah for me. We had it at the synagogue in Dresden in October 1938. This was the last one there; two weeks later [November 9-10], that synagogue was burned down during Kristallnacht. What a horrible name to call that night of fear and destruction: the night of crystal! We weren’t there, my mother and I, but we saw the destruction afterwards. All the Jewish shops were destroyed and the windows were all broken. We read about it in a German paper called Der Stürmer.

The passage on Kristallnacht  haunts me; I can’t imagine the German violence, the shock of seeing your synagogue destroyed and your community under attack. That was beyond my personal experience.

Fast forward to February 5, 2019, the second strand of thought. That night I went to my synagogue, Chabad of Bedford, for the first session of a class. The sight when I arrived confused me. Yellow police tape surrounded a lightless, wounded house of study. Other people there for the class shared the horrible news: A fire had broken out in the shul, cause unknown. We all wondered, in this time of rising antisemitism, whether this was arson.

The next morning, I joined other congregants and the rabbi to salvage what we could. With my camera I documented the extensive damage in the modular building. The Torah scrolls and prayer books had been saved, but the rabbi’s office and classrooms were destroyed. My photos show a dark ruin, as we tripped over dangling wires through hallways and spaces I could not recognize. Scenes of soggy, smoke-damaged religious books especially shook me. At least the blaze didn’t stem from arson—fire investigators found the cause was an electrical cord. 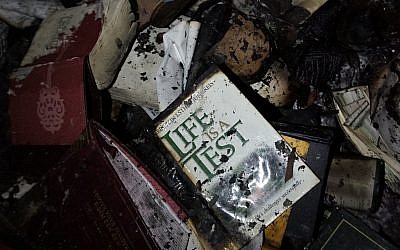 The salvage effort was on a Wednesday morning. On next Saturday morning, we were back in business at the Katonah Memorial House, a mile away. Not only did the congregation pull together for a Shabbat service, we also celebrated a bar mitzvah. After services, we packed the prayer books and tallises— still smelling faintly of smoke—in plastic bins and stowed them away. We’ve done the same every Shabbat since then. We are truly a shul on the move.

As for Eric’s memoir, we’ve been sending it to friends and family, including those in Germany. Friends in Berlin want to translate the book into German with an introduction sharing details about Eric’s father, Simon, a famous soccer player of the 1910s and 1920s. The memoir provokes strong reactions, as readers encounter life in Nazi Germany, Kristallnacht, a train trip through France and Spain to the ark of rescue called the American Export Lines freighter Excalibur in Lisbon, a new life in Port Chester, the terrors of total war, and a return to civilian life, all by the time Eric was 20 years old.

Naomi and I visited Dresden in 2014 as guests of the city government of Dresden, which invites the families of former Jewish residents back for several days of events and remembrance. The visit included a tour of the New Synagogue, with the outline of the destroyed Dresden Semper Synagogue visible on the plaza outside the new structure. We attended a Friday service there, with dinner at the adjacent Jewish community center. Even after the Holocaust, Jews returned and have made a presence in Dresden.

So that was my February. I read about one shul destroyed by fire 80 years ago, then directly experienced another that burned weeks ago; in both cases, the spirit remained. The kehilla, the community, picks up the pieces, carries on and, ultimately, rebuilds. As Jews, we’ve got a lot of practice doing that. 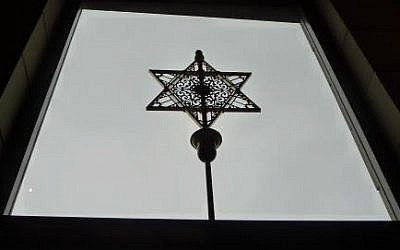 Star of David finial rescued from the destroyed Dresden Semper Synagogue by fireman Alfred Neugebauer, who hid it and returned it to the congregation in 1949.
About the Author
Van "Ze'ev" Wallach is a writer in Westchester County, NY. A native of Mission, Texas, he holds an economics degree from Princeton University. His work as a journalist appeared in Advertising Age, the New York Post, Venture, The Journal of Commerce, Newsday, Video Store, the Hollywood Reporter, and the Jewish Daily Forward. A language buff, Van has studied Spanish, Portuguese, Russian, Yiddish and Hebrew, although he can’t speak any of them. He is the author of "A Kosher Dating Odyssey." He is a budding performer at open-mic events.
Related Topics
Related Posts
Comments