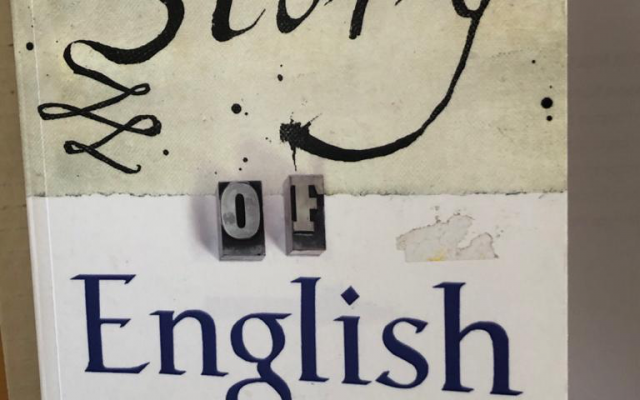 Having worked for most of my life as a translator, editor and writer, I thought it must be about time I learned something about the English language, which is the principal tool of my work.

I studied English at school, mainly literature with a little grammar along the way, but decided that I did not want to continue with it at university, so switched to Sociology, which turned out to be fascinating. And of course I had to use English in order to read and communicate, writing essays and gaining new insights into the way societies function.

The author of this book takes the reader through the various periods of British – and American – history, describing who conquered whom and when, and the effect this had on the growth and development of the English language. He starts with the Biblical legend of the Tower of Babel and posits the idea that there may indeed once have been a universal language, now lost in the mists of time, but paralleling the tale that once upon a time all people could speak the same language and understand one another. In fact, in the eighteenth century, William Jones, a linguist and scholar, posited the theory that present-day Asian and European languages had a common root, after he discovered links between the ancient Indian tongue of Sanskrit and Greek and Latin (the last two having clear links to most European languages).

Gooden takes us through the various stages of ancient British history, starting with the Celts, who lived in the British Isles from the Bronze Age onwards. Their language is akin to the languages spoken in Ireland, Scotland and Brittany. The Anglo-Saxons and Vikings, whose languages were mainly Germanic, were sea-faring marauders who settled in northern and eastern parts of Britain, and influenced the language(s) spoken by the local populace. It has been suggested that the term ‘Viking’ is an ancient Celtic word for ‘pirate.’

The Romans, under Julius Caesar and Claudius, conquered Britain from around 410 C.E., and remained there for some six hundred years, until the collapse of the Roman empire. Their language, Latin, was probably spoken by those segments of the British population with whom they had contact, but it was only after the Norman conquest, led by William the Conqueror, that the Latin-influenced French language came to be the dominant tongue spoken throughout the British islaes. It has even been suggested that Richard the Lionheart, the son of Henry II and Elinor of Aquitaine, spoke French and not English, as French remained the language of the ruling class for many generations. To this day the terms used for cooked food in England are closer to their French equivalents than the words used for the animals (sheep = mutton [mouton]; cow = beef [boeuf]), etc.

Thus, the English language which evolved in the early Middle Ages was a fusion of Norman French and Old English. At the time of the Renaissance in Europe, English became the language of literature, with writers such as Shakespeare and many others. King James, who succeeded Queen Elizabeth the First, instituted the translation of the Bible by teams of scholars. This gave us the rich and mellifluous text which is treasured throughout the English-speaking world to this day.

In the time of Queen Victoria the British Empire ruled about a third of the globe, and this served to disseminate the English language to such a wide extent that to this day English is the official language of countries which have a wide variety of native languages.

With the colonization of North America principally by English speakers, the language gained precedence over the various other languages spoken by successive waves of immigrants. Thus, with the growing pre-eminence of American power and prestige, as well as the widespread use of English in scientific and academic circles (not to mention the internet and social media), English has become the international lingua franca.

It is impossible to summarise this informative and well-researched book in this short space, as Philip Gooden gives detailed analyses of the processes and individuals who influenced the development of English throughout its history. For anyone who wants to learn more about the subject, I highly recommend this well-written and accessible book.