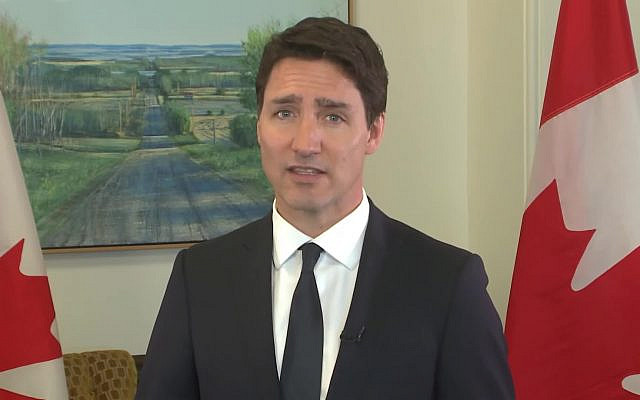 There was no lack of superlatives in reaction to Canada’s vote on December 18, 2019 in favor of the United Nations resolution A/74/398 affirming the right of Palestinians to self-determination.

Michael Mostyn, the CEO of B’nai Brith Canada claimed that, “This vote reflects poorly on Canada’s record as a defender of democracy and justice” and that “It stains Canada’s reputation”.

Hillel Neuer, director of UN Watch, accused Canada’s Prime Minister, Justin Trudeau, of “standing with the jackals”. On an earlier vote on the same resolution, he had accused Trudeau of engaging in a “Faustian bargain” to gain a seat on the UN Security Council. Britannica defines a “Faustian bargain” as “a pact whereby a person trades something of supreme moral or spiritual importance, such as personal values or the soul, for some worldly or material benefit”.

Canada’s Conservative opposition characterized Canada’s vote as “a betrayal of our ally and partner”.

The Centre for Israel and Jewish Affairs (CIJA) tweeted, “We remain angry and deeply disappointed that Canada voted against Israel”.

Former U.S. ambassador to the United Nations Nikki Haley said that Canada’s UN vote was an example of “cultural corruption” and that Canada was “trading its integrity” and had struck “a deal with the devil”.

The list of 167 countries that supported the resolution includes the United Kingdom where Prime Minister Boris Johnson recently won a resounding electoral victory against anti-Israel Labour leader Jeremy Corbyn. Therefore, all the accusations made against Trudeau also apply to Johnson, the same Johnson who recently announced that he was moving ahead with an anti-BDS law.

Wow again. Johnson sure fooled us into thinking that he was pro-Israel!

Let us examine the horrible crime that Trudeau, Johnson, and many other world leaders have committed.

It was difficult to extract any substance among all the insults thrown at Canada, but I finally found a hint of substance. UN Watch came out with this: “the text [of the resolution] condemns Israel’s anti-terror measures; see pp. 10 & 11”.

So, I looked at pages 10 and 11. The closest that I could find to match UN Watch’s accusation is the reference to “the advisory opinion rendered on 9 July 2004 by the International Court of Justice on the legal consequences of the construction of a wall in the Occupied Palestinian Territory”. The text does not deny Israel’s right to defend itself against terrorism. It does not even deny Israel’s right to build a security fence on Israeli land. It does not even introduce a new concept since it references a pre-existing court ruling.

Another glimmer of substance came from the Jewish News Syndicate that said that the resolution “calls eastern Jerusalem occupied Palestinian territory”, but such a recognition is hardly new. Even the US’s Trump administration, when it moved its embassy to Jerusalem, moved it to the western part of Jerusalem, within the green line. There is no country in the world, including the US, that sees anything outside the green line as legitimately part of Israel, at least not until a peace agreement establishes new borders.

It turns out that there is nothing outrageous in the resolution, which explains the lack of substance in the accusations against Canada.

There is nothing wrong with supporting the Palestinian right to self-determination. There is nothing wrong with supporting “an end to the Israeli occupation that began in 1967 and a just, lasting and comprehensive peace settlement between the Palestinian and Israeli sides”. Many if not most Israelis want the occupation to end. Their only concern is how to end it in a way that does not endanger the security of Israelis, but the UN resolution provides no direction on that. It is simply asking for a “peace settlement”.

Canada did not make a “deal with the devil”, it did not sell its “soul”, and it did not stand with “the jackals”. In fact, it is the US that should answer a question about the way it voted.

The only four countries, other than Israel, that voted against the resolution are the US, Micronesia, the Marshall Islands, and Nauru. I have never heard of Micronesia, the Marshall Islands, and Nauru, and I do not know their motives, but the US claims to want to play a role in resolving the conflict between Israel and the Palestinians. How can it expect to do that when it opposes the Palestinians’ right to self-determination?