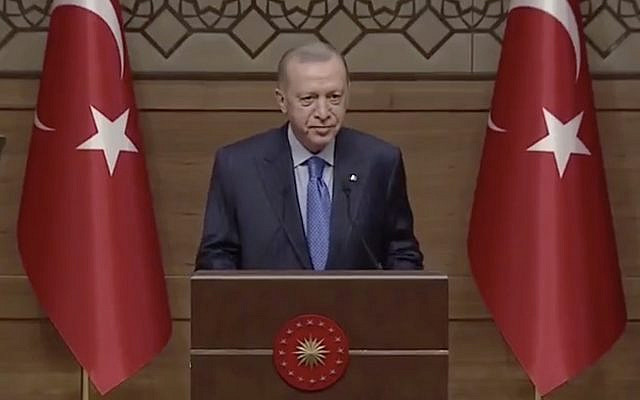 Recep Tayyip Erdoğan’s olive branch to Israeli President Herzog, has more to do with gas and economics while Turkey continues to support Hamas and other Islamist groups bent on destroying Israel.

In a statement issued on Tuesday, Autonomous Administration of North and East Syria (AANES) warned that the danger of ISIS will affect everyone and return to create chaos again, stressing the need to hold Turkey accountable and anyone who supported the scheme, which it called “dangerous dimensions and high targets.”

AANES, comprised of the Syrian Kurdish population of North East Syria have formed the Syrian Defense Forces (SDF), key allies of the west in the fight against the ISIS. This development of Israel’s border isn’t the only time where the Erdogan led Turkish administration has been accused of siding with the Islamists. Whether it is Somalia or Kashmir, Libya or Mali-Turkey often finds itself embroiled in conflicts-supplying arms and support to Islamist militias. Jerusalem Post reported on the 26th of January that after years of comparing Israel to Nazi Germany and vowing to “liberate” Jerusalem, Erdogan’s party has now been trying to peddle the narrative of distancing itself from the Hamas and seeking rapprochement with Israel. Turkey state and Erdogan supported media have announced that Hamas members, who live and operate freely in Turkey will be expelled or sent away, with no apparent proof to the claim, wrote Seth Frantzman. Erdogan also announced a state visit of the President of Israel Isaac Herzog, to Turkey.

A TOI report on Jan 27th stated that a spokesperson for Herzog declined to comment on Erdogan’s announcement, but officials have confirmed talks on a visit while speaking on condition of anonymity.“If a leader of an important Muslim country like Turkey reaches out to Israel, there is no option other than giving a positive answer,” a senior Israeli official told Axios Wednesday. In the same Axios report Barak Ravid writes that Israel’s Shin Bet intelligence agency stressed in the internal discussions about Turkey that any normalization process must include limiting Hamas activity in Turkey, according to the Israeli officials.

This duplicitous strategy isn’t new for Turkey’s Islamic brotherhood led Erdogan government. Already in 2020, Indian intelligence sources were regularly citing Turkey’s role, specifically through charities led by Erdogan’s family, funding terror in Kashmir and India. After Pakistan, Turkey was the biggest financier of terror in India, specially in the radicalization of youth.

Turkey, under Erdogan, in its quest to take the leadership of the global Islamic umma, has developed deep relationships with Pakistan, another US ally. Pakistan and Turkey enjoy close cultural, historical, and military ties which are now expanding into more deepening economic relations, specially with the sliding lira and the destroyed Pakistani rupee. Turkey’s Islamist internationalism under its President Recep Tayyip Erdogan has inevitably led to its deeper alliance with Pakistan. Turkish President and Pakistan Prime Minister Imran Khan are ideological brothers, both placing the role of religion at the centre of politics.

About a century ago, the father of modern Turkey, Mustafa Kamal Atatürk, turned the country into a modern secular nation by separating religion from state but President Recep Tayyip Erdogan and his ruling party have once again brought back the role of religion in state affairs. The secularist firewall of the 20th century, established by Atatürk and guarded zealously by his successors, that had separated religion and government, as well as religion and education, has completely collapsed. Islam now serves as the justification for all kinds of policies. For instance, according to the Turkish President, Islam did not allow him to raise interest rates. Consequently, the Turkish lira crashed to its lowest point in history. Inflation rate is also dangerously high in Turkey. When questioned by Turkish businessmen about faith-driven economic policies that is leading to economic crisis, the Turkish President, instead of addressing their concern, went on to accuse them of “scheming to topple the government”. He further exclaimed, “As a Muslim, I will continue doing what our religion tells us”.

Erdogan is just one example of an instance where a fundamentalist ideology gives the driving seat to emotion and the backseat to reason. Anything which the rulers believe to be religious injunctions become the driving force in all matters of the state – while reason and all principles of democracy are put on the back burner and all forms of criticism and dissent are classified as anti-religion and worthy of severe discipline.

Another example of religion playing a pivotal role in nation’s policies is Pakistan. Just like Turkey, Pakistan’s all state policies under its Prime Minister Imran Khan are now being formulated on the principles of religious injunctions. Foreign policy, economic policies and even the education policy is tailored on the basis of what the government sees as the demands of religion.

Though the country is on the verge of bankruptcy caused by free fall of Pakistani Rupee, sliding stock market and high inflation rate, the government is only concerned with increasing the religious content in the newly launched Single National Curriculum (SNC). The SNC itself is completely motivated by religious ideology and overloaded by religious injunctions – it is the brainchild of Imran Khan and has the capacity to turn regular schools into seminaries. It is hard to resist the thought that this new initiative by the Pakistan government is likely to churn out an army of ignorant, bigoted and religious fanatics. The raging fires of religious extremism will be further stoked and fed by new recruits and obscurantist die hard believers. Pakistan needs to realize that the rupee might recover some day and the economy may improve but this mad rush to impose a very particular interpretation of religion in all realms of life will certainly damage the very roots of the country.

Imran Khan has backed the Taliban’s victory in Afghanistan and has offered complete amnesty to the Pakistani Taliban. He supports the madrassa education  and has provided huge grants to some madrassas in Pakistan, while Turkey has sponsored madrassa’s in Afghanistan. One fears that based on the policies being implemented by his PTI government, Pakistan’s schools will soon be aping the Taliban type of education through complete implementation of the Single National Curriculum. According to an official notification, co-education in the Punjab schools will be stopped as per the religious ideology of the ruling regime-mirroring what has happened in Afghanistan since the Taliban takeover.

In general, it indeed appears that Erdogan and Imran Khan appear to be bow down to the forces of obscurantism and religious fanaticism. Imran Khan greatly admires Erdogan and supports Turkish President’s jihadist ambitions of conquest and revival of the Ottoman Empire. However, Islamabad must realize that it cannot afford such adventures. Pakistan can overcome its problems only if it roots out the menace of religious fanaticism. Security experts caution that when a country is in the vicious grip of religious zealots hell bent on imposing their religious agenda for political gains, the chances of any improvement are dim.

As Frantzman says in another article, Turkey’s agenda with Israel is to give nothing and take everything. This seems the basic Islamist policy of the day.  The Taliban visit to Oslo, Erdogan’s seemingly useless olive branch to Herzog or Pakistan’s rants about being the victim of terrorism. All examples of deception. Unfortunately, as the Asma Jahangir conference in Lahore concluded, all such actions would eventually be counterproductive to Turkish and Pakistani societies. Until then we will have to see what price Israel will pay to keep the Sultan (Erdogan), amused.