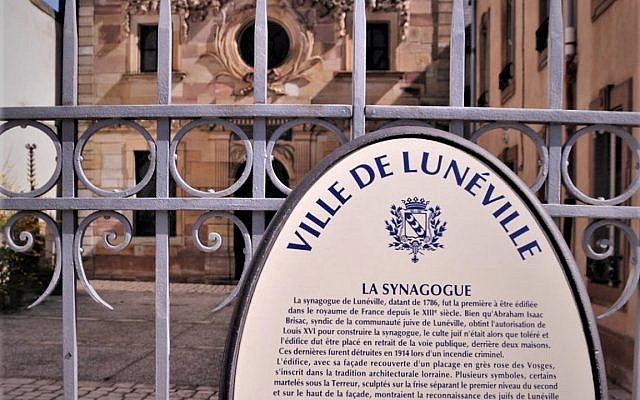 This striking photo, taken in 1915, shows the Rue Castara in Lunéville, France, where Rabbi Ernest Weill was murdered, along with other Jewish and non-Jewish civilians, by Bavarian soldiers during World War One.

The tragic event took place at this very location in 1914. The accompanying text of the photo also points out that we can see, on the left, the skeletons of the synagogue of Lunéville, left in ruins after an arson attack. 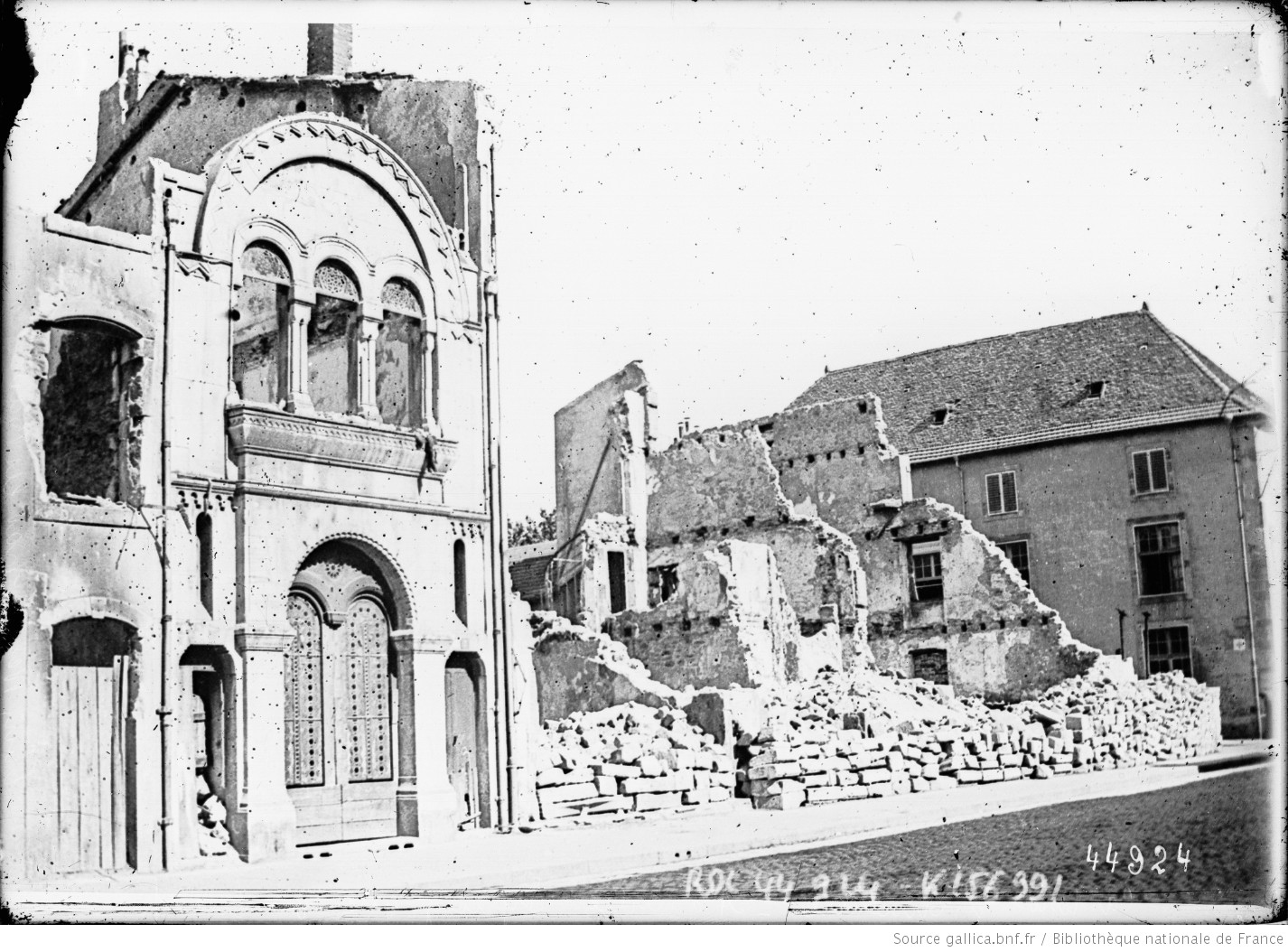 It was this photo that left me in wonder when I visited the synagogue a few years ago. Lunéville has only one synagogue and it was the first one built in the kingdom of France since the 13th century, or even perhaps since the 12th century.

This was by permission of the king Louis XVI, who granted this favor at the request of Abraham Isaac Brisac, property manager of the Jewish community.

As you can see it has a completely different façade. One could think it had been rebuilt, but I was standing in front of the original building from 1786 designed by architect Charles Augustine Piroux. 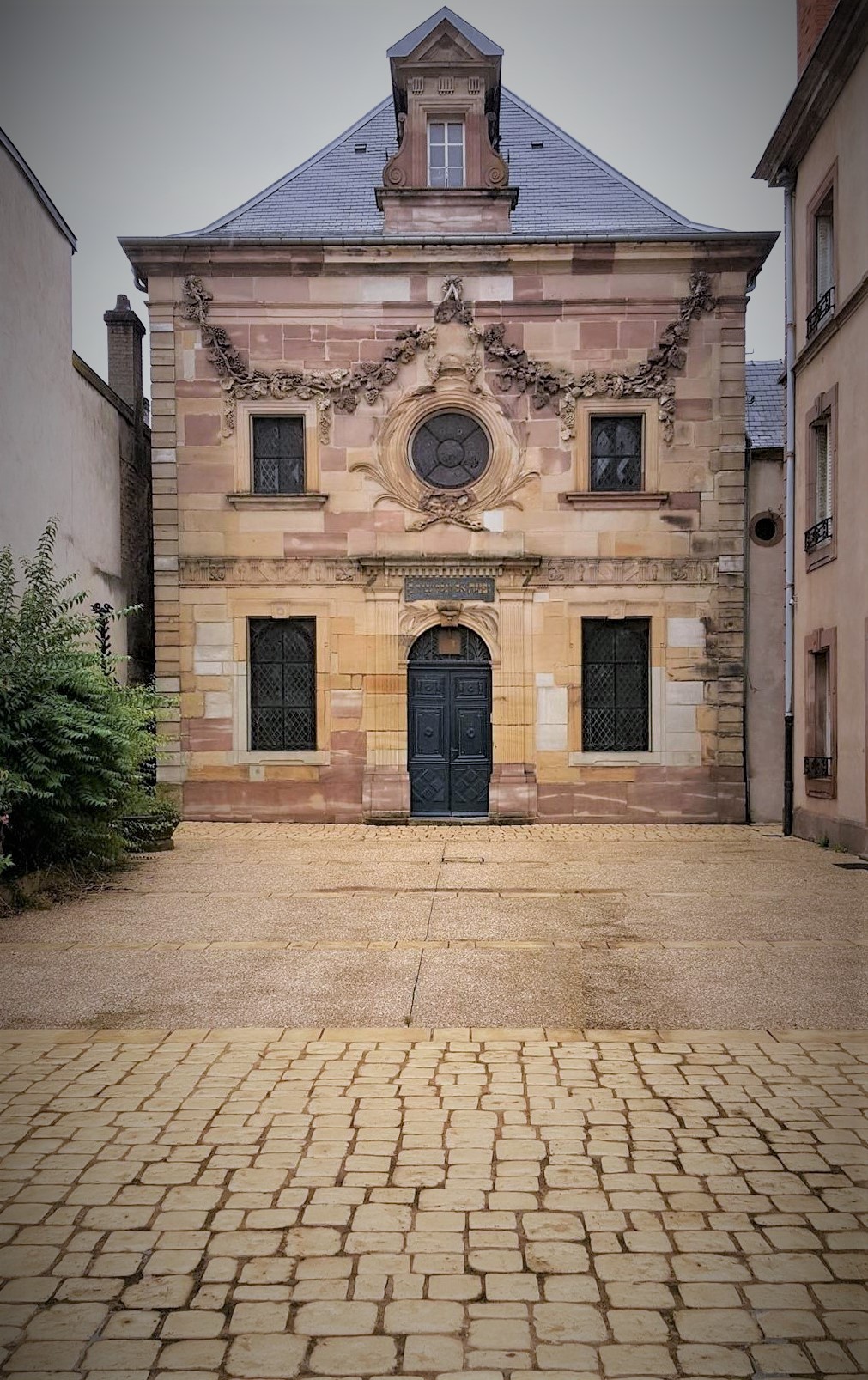 In fact, the buildings we see on the photo are those that stood in front of the synagogue, which was built away from public sight.

The monumental synagogue built from pink sandstone from Vosges and decorated with royal symbols in honor of Louis XVI’s recognition of the Jewish community, cannot be seen on the 1915 photo.

In the 18th century you could not have known what was behind this street and the actual building itself would not have been identifiable as a synagogue from the outside. It was tolerated to be built on condition that gatherings were held discreetly.

Visibility is everything. They had to function in a material context in which their Jewishness was officially hidden. There was no visible public status, and, in this way, the community was almost imaginary and preserved their sense of Jewishness in secret.

The permission of the king to build a synagogue allowed them to practice their religion more openly. But the non-public appearance of the building was aimed to hide the rituals and beliefs. They were only permitted to carry out the outwards forms in a secret building.

That what had disappeared by the fire, revealed a Jewish building, previously absent. So, to speak, the synagogue came out of hiding after the arson attack.

The destruction created visibility and as the vanished buildings were not replaced, anyone could read the words “To the God of Israel, by permission of the King of France, the year 1786” (“Au Dieu d’Israël, par permission du Roy de France, l’an 1786”) on the front of the synagogue.

Even though a light was cast on the synagogue, it was not until in recent years that the French façade text was replaced by one written in Hebrew. 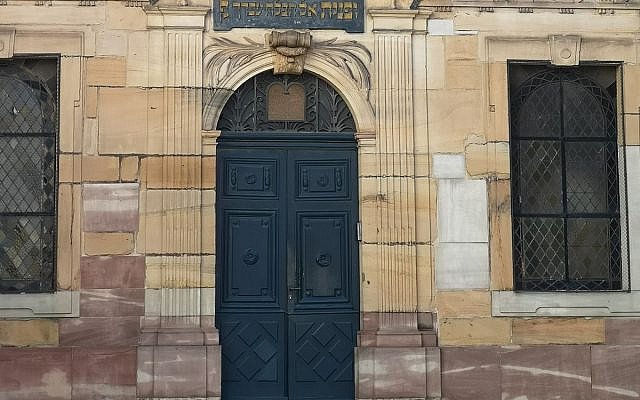 Façade of the synagogue of Lunéville. Photo Ticia Verveer.

ָNot only buildings but also doors and windows hold a symbolic meaning. Windows are the eyes of a building, they are not simply openings, but they let in the light and allow us to look out over the world around us.  A threshold could be symbolically or literally a place of safety or danger.

Doors are the guardians of a building, they let people in, or they keep people out. They bear witness to the troubles of past ages. Doors are not only functional but define the rules of behavior of a community.

This synagogue was not designed by his worshippers. It was dictated. Even when they have contributed to the building, the community had to be concerned outwardly to imitate the socially dominant group, in the construction of their building.

But architecture can never totally dictate the behavior within its spaces. Its façade serves as a shield of social agreement behind which the traditions and the patterns of the Jewish community were performed. This was a building where religion was hidden and protected. 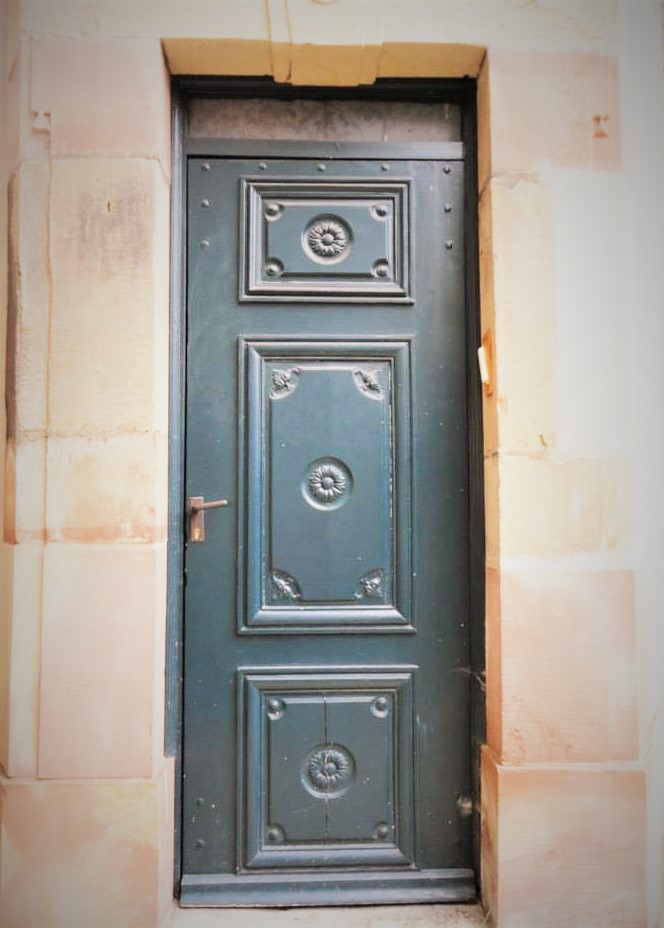 The women’s entrance at the synagogue of Lunéville. Photo Ticia Verveer

There is this opening, so low, that one must stoop to enter it.

The guide tells me that this was the door through which the children entered. Significantly the entrance doors to the synagogue were strictly specified for men, women, and children. 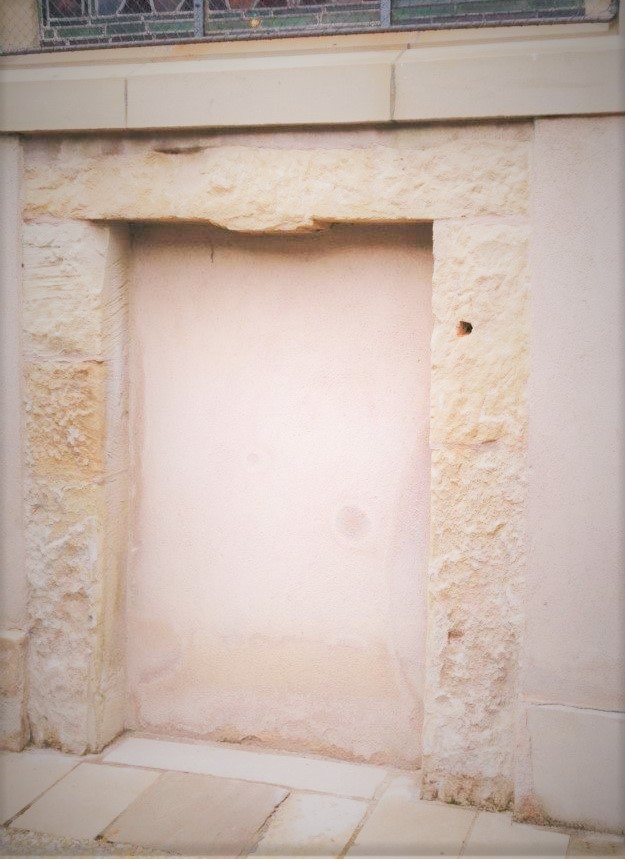 The children’s entrance at the synagogue of Lunéville. Photo Ticia Verveer

Today, it is permanently sealed, which brings a twinge of sadness for the children that no longer will pass in and out. I can picture to myself children running towards the door, laughing, and talking in loud voices. But the door is closed now.

Doors have been opened and closed to Jews throughout history. They are vulnerable portals, where danger lurks. I found a modern mezuzah nailed at the entryway doorpost. This mark with his protective powers for warding off evil spirits has been used by our people since ancient times. 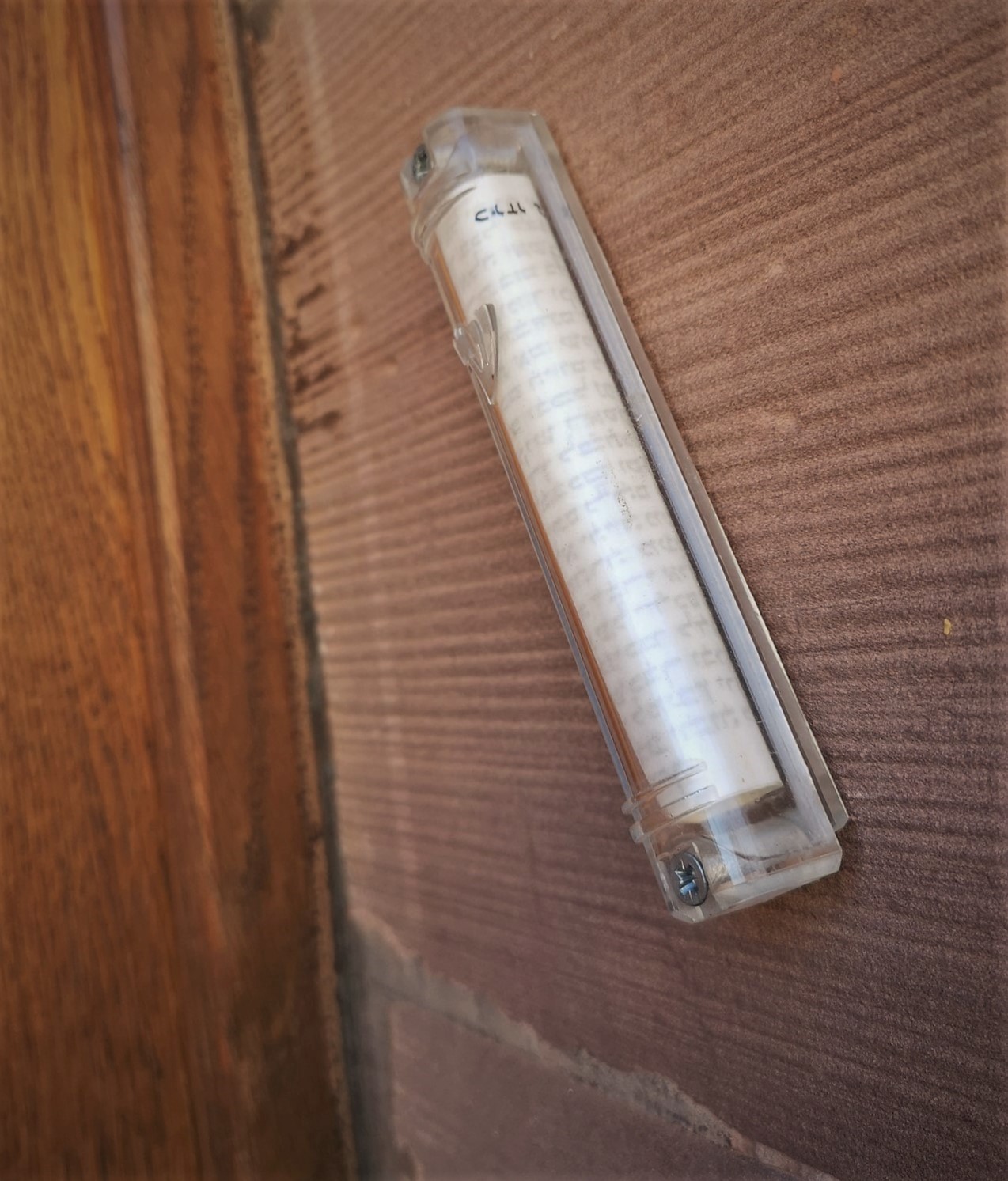 Mezuzah, at the synagogue of Lunéville, France. Photo Ticia Verveer.

Now, for me, it is a reminder that we are still facing the challenges of the outside world. There is no easy route to religious freedom, but a road of hope and despair, endings, and beginnings.

Enduring stereotypes of Jews and “Jewish behavior” existed long before World War I.

Waves of disease have brought waves of hate in the past. Blaming the ‘Other” has sparked hate towards the Jewish community when mysterious diseases hit societies around the world.

Today, there is a vivid Jewish community thriving in Lunéville, but conspiracy theories are flaring up while the coronavirus pandemic spreads further and further.

Agnes Buzyn, France’s previous health minister, who is Jewish, has been accused of poisoning wells with Coronavirus. A caricature  of her has been circulating on social media, alongside the yellow star marked ‘Jude’ (‘Jew’).

The door to hate has never been closed. The synagogue was hidden from the street behind a house in the 18th century, which was a necessity among a population that did not welcome the Jewish presence.

Let us not fool ourselves when we visit the idyllic situated synagogue of Lunéville that the age-old Anti-Semitism has left the streets. 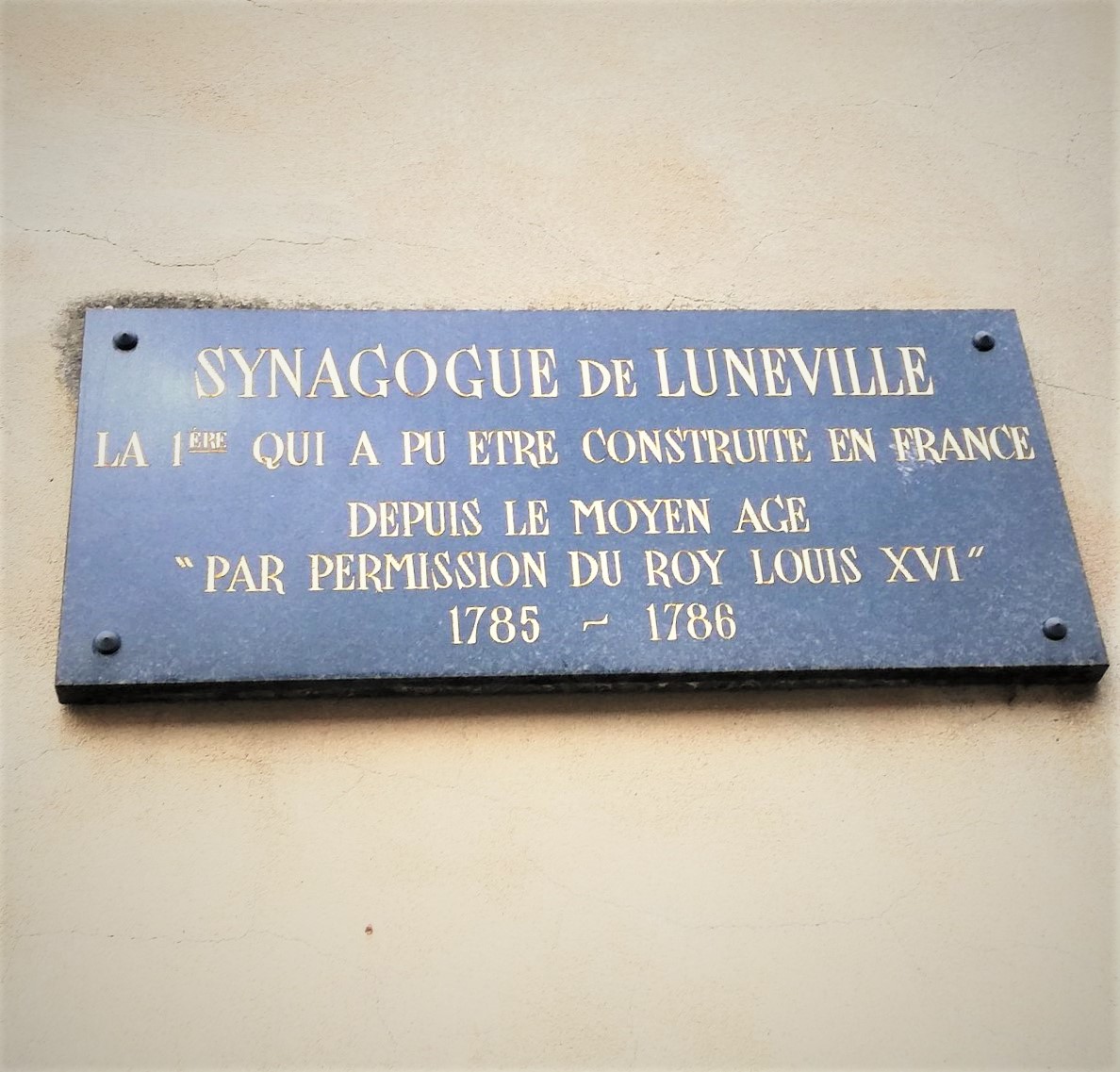 Photo Ticia Verveer.
About the Author
As an archaeologist, Ticia Verveer has over 20 years of excavation experience in the Middle East, the Sahel, and North Africa. She is Maternal Health Ambassador for Global Fund for Women, one of the world's leading foundations for gender equality. Ticia is a descendant of Abraham Salomon Cohen Verveer, the grandfather of Holland's most important Jewish Romantic painter, Salomon Leonardus Verveer (1813-1876).
Related Topics
Related Posts
Comments