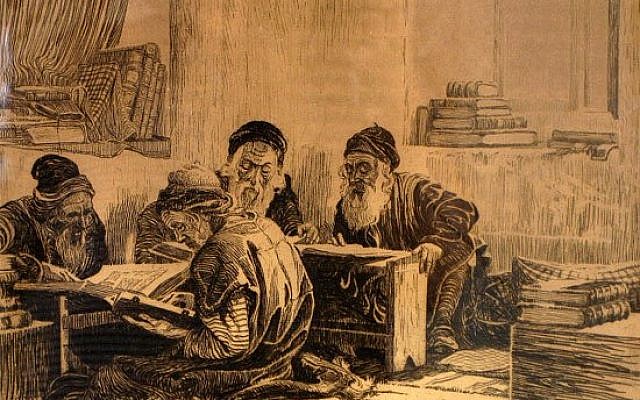 Hundreds of thousands of Jews, men and women, in Israel and all over the world, are finishing these days the seven and half year cycle of Talmud study, called the “Daf Yomi.” Every day a page of the Talmud is studied, over the course of 2,711 days. Siyumim, public celebrations in honor of concluding the study cycle, are held in hundreds of locations, some of them prominent and visible. Those who participate take joy and pride at the accomplishment of having completed the intellectual and spiritual challenge.

The occasion of the siyum is typically one of bolstering the value of Torah study, encouraging more and more participants to join the upcoming seven-and-a-half-year cycle. It is the value of Torah study that is featured and the merits of daily study of “the Daf.” Rarely, if ever, does one encounter an attempt to make a statement regarding the content of the Talmud, its meaning and message. The challenge of articulating a broad message is even greater if one is to present the Talmud and its ongoing study to audiences who do not partake of the daily study. What follows is an attempt to share an insight regarding the Talmud and its religious significance that I consider relevant to both audiences – those who are presently celebrating the completion of the Shas (acronym for the Talmud) and those who are farther removed. It grows out of my own completion of the study cycle, during the previous cycle, making me both an insider and an outsider to the present celebration.

As I made my way through one tractate after another, I was struck by the following phenomenon. The Talmud, as commentary on the Mishna, opens with a discussion on the opening Mishna of a given tractate. This initial discussion is the opening sugya, in other words opening discussion of the tractate. Time after time, I noticed how the opening sugya makes mention of the Temple. On occasion the association is organic to the discussion. More often, the association would not have been made had there not been some intentionality behind it. Someone wanted to make a point, and found a way of associating the opening of the specific tractate with the Temple. Sometimes the association is made by means of halachic (legal) associations; at other times it is aggadic (story or non legal material). It gradually became a guessing game – how will the editor of the Talmud associate this tractate we are now beginning with the Temple, whether built or destroyed? Lo and behold, he always does. (With the exception of two tractates, Shabbat and Makot, for which an explanation must be offered). It is ultimately the editor who makes the association, by bringing together various sayings or through the anonymous editorial voice that holds the Talmudic discussion together. It is as if the editor sought to deliver a message to the future reader regarding the meaning of the work he is presently completing. The message is – even as you study the Torah, in its most popular of expression in the Talmud, do not forget the Temple.
In statistical terms – One entire order (the Talmud is a commentary covering four orders of the Mishna, and two additional tractates) is in any event devoted to the Temple and its workings. Of the remaining tractates, 26 of the 28 tractates introduce the theme of the Temple into the opening sugya. In 19 cases the reference is explicit, even if brief. The remaining seven tractates either engage matters associated with the Temple as their subject matter or establish alternative means of association with the Temple, such as finances associated with the Temple (hekdesh). Only 3 instances are in the realm of aggada. The overwhelming majority of associations is halachic. In 14 cases, the mention of the Temple is superfluous in terms of what is really required for the discussion. The Temple is mentioned because it was important for the editor to do so. If we only consider the individual tractate, one may not notice the intentionality, inasmuch as the motif is integrated in the tractate’s discussions. It is only when one considers the Talmud as a whole that the full picture emerges.

Before dwelling further on the Talmud’s message, let me share two examples, one halachic and one aggadic.

The first tractate in the Talmud is Berachot. The opening sugya discusses the division of the night into sub-sections. In this context, on the second page of the entire Talmud, the following passage is brought:

Rabbi Eliezer says: The night consists of three watches, and over each and every watch, the Holy One, Blessed be He, sits and roars like a lion in pain over the destruction of the Temple. This imagery is derived from a reference in the Bible, as it is stated: “The Lord roars [yishag] from on high, from His holy dwelling He makes His voice heard. He roars mightily [shaog yishag] over His dwelling place” (Jeremiah 25:30)….

Rabbi Eliezer says: The night consists of three watches, and over each and every watch, the Holy One, Blessed be He, sits and roars like a lion in pain over the destruction of the Temple. This imagery is derived from a reference in the Bible, as it is stated: “The Lord roars [yishag] from on high, from His holy dwelling He makes His voice heard. He roars mightily [shaog yishag] over His dwelling place, He cries out like those who tread grapes, against all the inhabitants of the earth” (Jeremiah 25:30). (Bavli Berachot 3a)

No sooner have we entered Talmudic discussion and we learn of God’s suffering at the sight of the destroyed Temple.

An example of a halachic discussion introducing the theme of the Temple is found in the opening discussion of tractate Gittin. The first Mishna in Gittin states that someone who brings a divorce-bill (get) from abroad has to testify that it was written and sealed in his presence. This leads to a discussion of different geographical regions and what kind of testimony to the authenticity of the get can be provided from one region to another. The argument that there are pilgrims who guarantee a flow of potential witnesses leads to the following question by the editor: “Let us assume this is so, while the Temple stood, but what of now, when the Temple no longer stands” (Gittin 4a).The editor has succeeded in making the seemingly impossible association of divorce bill and Temple.

What does all this mean? Following the destruction of the Temple, the sages were successful in reorganizing Judaism around new spiritual focal points. This has allowed Judaism to survive and to flourish for two thousand years. The most foundational value in this Judaism is Torah study, a value whose continued relevance and resilience is made manifest in present festivities surrounding the completion of the Daf-Yomi cycle. Torah study took the place of the Temple as the center-point of Jewish life. The Rabbis are conscious of the shift, and recognize Torah study as a substitute for the Temple.

Rabbi Shmuel bar Naḥmani says that Rabbi Yonatan says: These are Torah scholars, who engage in Torah study in every place. God says: I ascribe them credit as though they burn and present offerings to My name….

Torah scholars, who engage in Torah study at night. The verse ascribes them credit as though they engage in the Temple service….

Torah scholars, who engage in studying the halakhot of the Temple service. The verse ascribes them credit as though the Temple was built in their days and they are serving in it. (Menachot 110a)

With the rise in Torah study as the central religious activity of rabbinic Judaism comes the challenge – how to not forget the Temple and its centrality, though it lies in ruins. What the Talmud’s editor tells us, as we embark on the study of each and every tractate is: Even though there is great value in your Torah study, equivalent to the Temple itself, never forget the Temple and how badly it is missed in our spiritual aspirations. And so, no matter how much pride we take in having completed the Shas, we must also recall that we take pride in a form of Judaism that is in some way an ersatz, a substitute for the true, full and lost glory of the Temple and of God’s presence and dwelling in it.

A hidden hand has orchestrated the completion of the study cycle on the heels of the festival of Hanukkah. Hanukkah is the festival that reminds us of the aspiration and the possibility for renewing and rededicating the Temple. It is also understood by many as a festival that symbolizes the light of Torah. Both Temple and Torah are celebrated in Hanukkah. We now recognize that this coupling, and the reminder that one must not lose sight of the one on account of the other, is a meta-message that the editor of the Talmud seek to impart to us.