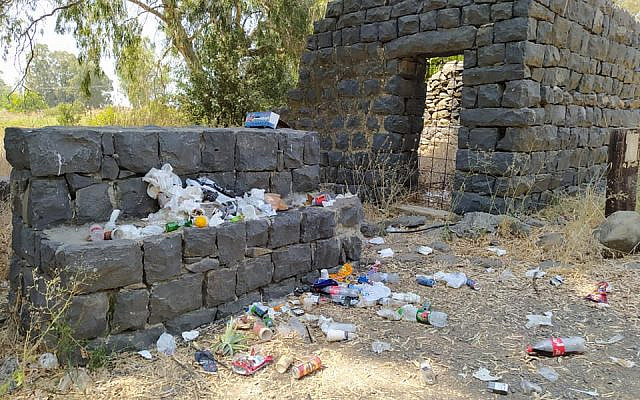 The unsightly and unwelcome litter that sullies Israel's countryside. (courtesy)

As millions of Israelis plan their well-deserved holiday outings this Sukkot, it is well to offer a well-meaning harangue about garbage. Consider it a “motivational” sermon.

Sadly, most people who even briefly step out of Israeli civilization to refresh themselves via an encounter with the natural world, have an experience that is sullied by the residuals of civilization: the ubiquitous trash that fouls our country’s countryside. Israel, my friends, is a mess.

Pictures are probably worth a thousand statistics, and several accompany this article. But a few numbers are also in order, to offer a sense of the magnitude of the problem. After a recent holiday weekend, the Nature and Parks Authority collected 140 tons of garbage – just from tourist sites contiguous to the country’s stream. That’s a small mountain of trash. Every year, the Jewish National Fund spends roughly 20 million shekels to private companies to come and remove the rubbish left behind by the hundreds of thousands of visitors after their general revelry.

The problem, it seems, is getting worse.

Israelis produce 680 kilograms of garbage per capita each year — far more than Europeans. Some 83 percent of our refuse is buried. (This is pitiful if one compares our performance with 35% in Europe; or even 53% in the US.) This prevailing Israeli throwaway mentality presumably accompanies citizens when they go out to hike, picnic and enjoy nature: far too many insouciantly leave behind their plastic bags; cans; bottles; dirty diapers; dogs’ business – and all the nasty and non-biodegradable trappings of modern consumer society

Israel is hardly alone: the OECD reports that during the past twenty years, notwithstanding sanctimonious academic manifestos about the benefits of a circular economy and rising concern about microplastics, the amount of plastic actually produced on the planet has doubled. Only 6% of it is recycled. Much of the rest ends up as litter. As Barry Commoner’s age-old ecological axiom goes: “Everything must go somewhere.”

Israel’s Ministry of Environmental Protection proudly reports the 10,000 fines it levies, on average, each year – on the few unlucky litterers that it catches. This is a tiny percentage of the violators. On average, the total sum collected only comes to about 10 million shekels a year. And a report recently prepared for the Knesset Interior and Environment committee calculates that actual collection of fines for littering may be as low as 10%. Unfortunately, the polluter is not paying.

Part of the problem with the ministry’s enforcement efforts is prioritization. The fine for littering “sensitive sites” (e.g., nature reserves, forests, beaches, archaeological sites, etc.) is only 750 shekels – a modest sum, but higher than for general littering. All the same, only 4.2% of littering fines are levied at violations taking place at these sensitive and comely places. When we held hearings in the Knesset this year about the problem, environmental and nature protection agencies agreed that the number of enforcement personnel who might catch someone red-handed is trivial. As a heavy user of the country’s many lovely natural sanctuaries, I can confirm that there is absolutely no sense of oversight.

Ultimately, Israel’s “command and control” enforcement strategy for addressing litter is not working. The likelihood of getting caught, as well as the level of the fines themselves, are simply too low to create meaningful deterrence. It can also be argued that with so few green inspectors available to monitor egregious, toxic polluters nationally — additional, new enforcement manpower probably should not direct their attention at popsicle wrappings and coke bottles.

What we have is a colossal educational failure. But we can do better.

One innovative initiative which seeks to bring a new approach to the problem is led by my neighbor, indefatigable Bar Ilan University Professor Michal Tzion. The strategy adopted by her newly-established NGO emerges from the organization’s name: “Take the Garbage With You”.

After observing decades of failure, Michal reached the conclusion that it is time to stop relying on clean-up campaigns, which at best ameliorate the symptoms, but never really address the source of the problem. Indeed, these well-meaning campaigns may actually perpetuate a sense of entitlement among ne’er-do-wells — that someone will eventually clean up after them. “

Rather, “Take the Garbage With You” demands individual responsibility, which it inculcates in school rooms, youth movements, synagogues, mosques and communities around the country. It’s an old message after all: “When you go out to nature, leave only your footprints and take only your memories.” Michal believes that local governments and the younger generation need to be engaged. And when approached, they answer the call.

If there was an easy response, we would surely be living in a cleaner country. The answer has something to do with convenience, societal norms, and the classic “tragedy of the commons” paradigm. When faced with the hassle of carrying out their garbage after forays into public parks and vistas, some people simply opt for a “path of least resistance.”

Citizen “enforcement” can help change the present social equation associated with littering. As they did with wildflowers and later with water conservation, Israeli children need to be taught to call their parents to task if they do not manage their garbage responsibly. It is not “all right” to leave a bag of trash leaning on a tree, next to a full garbage can — so that a fox or jackal can tear it open that night. Societal norms will not change without a healthy modicum of embarrassment among recalcitrant or complacent individuals. Happily, surveys suggest that these are a small minority of the Israeli public.

Sukkot is a holiday celebrating the children of Israel’s journey across what was presumably a pristine desert environment: from the fleshpots of Egypt to the wholesome land of milk and honey. During the coming week, it is important to have meals in a sukkah. But if one wants to identify with our ancestors, the ancient Israelites, there is no holiday where walking across open spaces makes more sense. The clement weather typically offered by the early autumn helps: welcome respite after a blazing summer swelter.

It is therefore no wonder that so many Israelis are out hiking, picnicking and enjoying the goodly land of Israel. We should all be there. But when you go, make sure you bring whatever garbage bags and accessories you need to “pack out” whatever you “packed in.” And make sure you bring a healthy dose of chutzpah with you as well, to call out anyone who doesn’t.

During Sukkot, we recall that for 40 years, the children of Israel wandered before they were given the privilege of entering the promised land. Now that we are its present custodians, it is our solemn responsibility to keep it clean and beautiful.