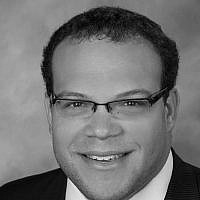 The Blogs
Brad Kauffman
Apply for a Blog
Please note that the posts on The Blogs are contributed by third parties. The opinions, facts and any media content in them are presented solely by the authors, and neither The Times of Israel nor its partners assume any responsibility for them. Please contact us in case of abuse. In case of abuse,
Report this post.

Israel is once again under a barrage of Hamas rocket attacks that has not been this intense since 2014. 2000+ rockets over the past several days have been fired from Gaza into Israel by Hamas targeting both Tel Aviv and Jerusalem killing a 5 year old child among other Israeli citizens and destroying homes. Whenever Hamas launches unrelenting attacks against Israel and Israel rightfully defends itself as any civilized country would in the same situation, the pro-Palestinian  propagandists in the U.S. and beyond  as a matter of course robotically castigates Israel for causing the violence

This time around Bernie Sanders, Rashida Tlaib, Ilhan Omar, Alexandria Ocasio-Cortez,  and Elizabeth Warren did not disappoint with their despicable knee jerk reaction to malign Israel.  Warren tweeted “the forced removal of long-time Palestinian residents in Sheikh Jarrah is abhorrent and unacceptable. The administration should make clear to the Israeli government that these evictions are illegal and must stop immediately.”  She later called on the US to prevent the “impending forced removal of Palestinian families from East Jerusalem.”

In response to Secretary Blinken’s statement that Israel has a right to defend itself, Ocasio-Cortez tweeted “blanket statements like these with little context or acknowledgement of what precipitated this cycle of violence-namely, the expulsion of Palestinians and attacks on Al Aqsa-dehumanize Palestinians & imply the US will look the other way at human rights violations. It’s wrong.”

Tlaib  urged the Biden administration to “put  an immediate stop to forcing Palestinians out of their homes.” In fact, it is these anti-Israel haters who are spewing their venom against Israel without context and repeating the same lines over and over again in an instinctive cyclical fashion without any regard for the facts. If you did not know anything about what is happening on the ground, you would think that Israel instigated the violence which is completely false.

Let’s accept AOC’s suggestion and provide some real context. Israel never would kick Arabs out of their homes in Sheikh Jarrah as a punitive measure because they are Arab. Many Israeli Arabs live peacefully in Israel with full rights and are proud citizens of the country. However, Israeli courts after a lengthy legal battle have determined that seven Arab families in the Sheikh Jarrah, Jerusalem neighborhood are not entitled to reside on the land and for good reason. They are not the legal landowners of the property. Sheikh Jarrah was formerly a Jewish neighborhood called Shimon Hatzaddilk and Nachalat Shimon that became Jewish- owned property when Jewish landowners legally purchased the land in 1875. The area houses the tombstone of the high priest Shimon Hatzaddik.

Jews continuously lived in the neighborhood until 1948 when they were ethnically cleansed from their homes by the Jordanians. Yet, when Jews are ethnically cleansed from their homes by Arabs, the vehemently anti-Israel squad members and their supporters could care less. When Jordan assumed control of the neighborhood after 48, they banned Jews from living there and built an Arab neighborhood over the Jewish neighborhood. In 1967, when Jerusalem was reunified by the Jewish state, the Jewish landowners instituted legal proceedings to reclaim the land stolen by the Jordanians. Israeli courts ultimately decided in an act of leniency to allow the seven Arab families to remain in their homes as long as they paid rent to the Jewish landowners.  However, these families  failed to abide by a Court order and refused to pay rent.  After 54 years of litigation, the lower courts held that eviction is the  appropriate remedy  for failure to pay rent which will likely soon be upheld by the Israeli Supreme Court.Now, unless all evictions in the entire world are illegal, whenever a tenant fails to pay rent they are subject to removal from the property. The Jewish landowners are merely exercising their rights afforded to them by basic real property laws. For Warren and the others to use a validly decided legal case in a democratic country to deliberately create this canard that Israel is displacing Palestinians from their homes  shows their deep seated hatred for the Jewish state.

Finally, Israel did not target  worshippers at the Al-Aqsa mosque. Those so-called worshippers used a religious site to pelt Jewish worshippers, with an arsenal of rocks and Molotov cocktails, who were praying at the Western Wall which promoted a response by Israel to halt the attacks on the Jewish worshippers.

The real reason Hamas launched these latest rocket attacks on Israel is because they received funding to do so from Iran. As Ramez Al-Hababi, a Palestinian-Islamic terrorist,  stated  in a May 7 interview on Iraqi television “the mujahadeen in Gaza and in Lebanon use Iranian weapons to strike the Zionists. We buy our weapons with Iranian money. An important part of our activity is under the supervision of Iranian experts.”

Instead of  defaming Israel with vicious lies,  if  the radical progressive left truly wanted an end to the violence, it would behoove them to  pressure the Biden administration not to reenter the Iran deal as appeasing Iran only encourages Hamas to intensify their attacks on Israel.

About the Author
Brad is an attorney, freelancer writer, blogger who cares deeply about Israel and the Jewish people.
Related Topics
Related Posts
Comments