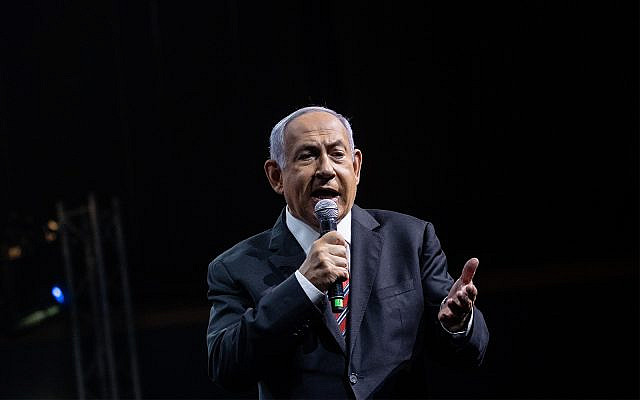 But there’s no point complaining about inevitable things: Benjamin Netanyahu is the longest-serving prime minister in Israel’s history and first to stand trial in office; he’s a major global figure and political genius whose flawed comportments have whipped up a frenzy for him to go. Of course the election next Tuesday is about him.

And if it’s ideology we seek, Netanyahu provides it in spades. After 14 cumulative years of his leadership, there is a record to go on and the choice is quite profound. You won’t hear much about it on the stump; politicians and their advisors have little faith in the electorate and they appeal mostly to emotion and preconception.

Here, then, is an attempt to sketch out with dispassion the Ultimate Netanyahu Scorecard, as a public service to fence-sitters. This companion piece to last fall’s Donald Trump scorecard is arranged by subject from best performance to worst.

Israel has suffered its fewest deaths by terrorism in quite some time (by reasonable measures) in the 11 years since Netanyahu returned to office, and he has avoided unnecessary wars. He apparently wanted to attack Iran over its nuclear program but was blocked, and the military campaigns in Gaza were not something other Israeli politicians offered clearly better approaches to (though I have argued that the blockade should end). Israel’s attacks on Iranian positions in Syria have been risky but not indefensible, and it has not been punished.

The West’s current leadership hates Netanyahu because of his illiberalism, interference with the Iran nuclear deal and snarling at the Palestinians. The grand exception was fellow semi-pariah Donald Trump, who provided Netanyahu (and to a degree Israel) with astounding gifts (capped by the recognition of Jerusalem as capital), apparently to please his Evangelical base; that alliance was a gamble that could backfire now that the Democrats are back in the saddle. But Bibi is still beloved by key authoritarians in India, Brazil, Russia and even China. And, critically, the Sunni Middle East is losing patience with the Palestinians, hates Iran more than Israel, and is open to deals. Not all the problems are resolved (the Temple Mount, etc.) but there is  an intriguing admiration for Netanyahu’s chutzpah and resilience in pockets of the Arab world, which partly explains the 2020 peace deals in the Gulf.

Netanyahu has shepherded unspectacular but steady growth that puts Israel near the bottom of the OECD (the world’s rich nations club) but still getting slightly richer all the time (factoring out Covid average annual growth was 3.6%). Inflation has been near zero, the tech sector is a world champion, and lower taxes, cellphone costs and airline prices have pleased the middle class. But little has been done about onerous red tape, soaring house prices and the extreme concentrations of economic power and wealth (among the worst in the developed world). The deficit is catastrophic (more than COVID required) and there has been no state budget for 2 years because a political machination by the prime minister. Politics-driven spending choices favoring West Bank settlements and subsidies for the Haredim over education and healthcare have wreaked havoc. Low teacher pay attaches to the embarrassing results of Israeli students on comparative international tests. Israel’s 3 hospital beds per 1,000 inhabitants is well below the OECD (below Greece, a third of Russia’s figure and a quarter of Japan’s); Israel’s standing is similarly middling in numbers of doctors per capita.

Israel is number one in vaccinations per capita, already covering most adults. But it ranks 9th-worst on infection rate (out of 221 countries on worldometer.info) with 85,000 cases per million  (worse by multiples than successful countries like New Zealand, Japan and even Germany); on fatalities, Israel similarly is closer to the worst than the best, with 630 deaths per million, which is not as bad as Britain (1,810) and the US (1,593) but worse than most countries and almost double the overall world figure of 329 – despite its young population. Israel is a world leader in workdays lost and number one in national lockdown days. The reasons for the middling performance have much to do with Netanyahu’s refusal to apply differential lockdowns that would have targeted his coalition allies, the Haredi sector. Netanyahu wants credit for the vaccinations, but must them accept blame for a grim picture overall (about which he systematically misleads).

Netanyahu started his political career denying that there was a “demographic problem” for Israel in making itself inseparable from the occupied territories through Jewish settlement (inter alia, in a Jerusalem Post interview with me in 1989). But eventually the numbers caught up to him and he framed opposition to the 1990s Oslo Accords as a security matter. In 2010 he even declared his support for some sort of two-state solution. Yet he has done nothing to further separation, while continuing settlements and occasionally threatening annexations. There’s no visible end to the human rights abuses and the embarrassment of Jewish and Palestinian neighbors living under different laws. There has been no third intifada — but the Palestinians will eventually demand citizenship and the world will support them.  If Ariel Sharon had not wisely quit Gaza there would already be demographic parity; it is a rare case of willful national suicide.

Hard as it is to conceive of a bigger danger to Jewish and democratic Israel than the previous sections, there is one. Haredi leaders created a cult where most male adults are encouraged to study religion all their lives and be paid for this, and most highschoolers are not taught math, science and English. Huge families unheard of elsewhere in the developed world live in poverty slightly eased by state subsidies necessitated by very low labor participation. They mostly refuse conscription. Even if this were somehow acceptable for a minority of about 12%, they are headed toward being a majority unless the support system that sustains this birthrate changes. The Israeli Democracy Institute finds the Haredi population is 50% higher than a decade ago, increases by 4.2%  annually and doubles itself every 16 years, about three times the country’s overall rate. Pew found that 90 percent of this coming majority want the Halakha to be Israel’s law and two-thirds want gender segregation in public transport. An explosion is nearing and a change is needed, but Netanyahu cannot lift a finger because his wobbly majorities depend on them completely.

Netanyahu is the most impressive of orators and one of the few non-Anglo leaders with flawless American English. But he’s also a shameless prevaricator who dangerously incites against rivals. These include the police, prosecution and legal system whom he accuses of manufacturing charges against him of bribery, fraud and breach of trust (so some have needed bodyguards). These charges are just the tip of a bizarre iceberg of skimming, scamming and scheming: millions earned in shady stock deals involving a cousin; close cronies indicted for corrupt weapons deals he claims to know nothing about; his wife obsessively omnipresent on trips, at functions and in official meetings, and repeatedly sued by staff for strange abuses; constant expenses scandals including the public paying huge sums for  his personal home’s pool; and even in this pandemic year, an eye-popping request for a million-shekel tax break.

It seems we’re looking at a marginal C student with brilliant potential and devastating personality flaws. Keeping him in office retains the somewhat successful status quo as well as the steady suicide march; removing him opens the door to change on the religious front, progress with the Palestinians, both risky, and also a return to a modicum of public hygiene.

When one man really does represent a fundamental fork in the road, there is nothing wrong with a referendum on that man. It reflects not shallowness, but an austere sort of maturity: accepting reality as it is.