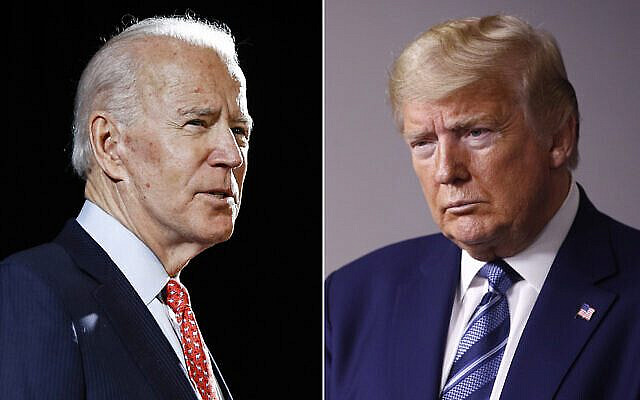 In this combination of file photos, former US vice president Joe Biden speaks in Wilmington, Delaware, on March 12, 2020, left, and President Donald Trump speaks at the White House in Washington on April 5, 2020. (AP Photo, File)

I have noticed with some surprise that despite the deluge of US election analysis one finds nary a single dispassionate accounting of Donald Trump’s overall record as president. As the election is on Tuesday, I offer this one in the nick of time.

I address the Ultimate Trump Scorecard to the 11 percent of voters who are supposedly still undecided, to everyone in my home state of Pennsylvania on which the whole thing may turn, and to any Israelis wondering why they stand almost alone as foreigners who love Trump.

I have not hidden the fact that I do not want Trump reelected, and I’ve tried to argue the case on these and other pages with an edge that can easily be mistaken for extremism. I will discard that this once in favor of dispassionate analysis. And let me concede the point: this is not the case for the Democrat Joe Biden; he’s a decent fellow but this election is a referendum on the transformational Trump. Here goes:

Trump cut taxes to corporations and the rich, and a little bit to the middle class as well. This led to howls from the Democrats and many economists, and was not popular at the time, because the US is already the most unequal developed nation in its distribution of assets and income. And yet, the Trump cuts were somewhat more modest than those enacted early on by George W. Bush and Ronald Reagan, and one could argue that the fiscal stimulus worked and the move turbocharged US stock markets, which basically are up 50% since his election. It’s not crazy to support it. On balance, as I argued here, Trump’s numbers suggest a reasonable but not great steward of the economy.

Trump has done the usual Republican things well. Beyond cutting taxes he slashed regulations all over the place, which has stimulated some business but done grievous harm to the environment (greenhouse gases, clean air, endangered species – wherever you look you find scorched earth); he has steadfastly opposed gun control despite the regular-as-clockwork mass murders that result; he has tried with minimal success to undo the Affordable Care Act which Republicans hate even though this has meant trying to throw people off the rolls in the middle of a global pandemic; he has been appointing Federal judges like mad, and with Amy Coney Barrett has now added three conservative justices to the Supreme Court. That means pretty good chances that US states will be able to ban abortion, which has long been a Republican obsession. He also pulled the US out of the Paris accord on climate change because he is a skeptic in line with a Republican orthodoxy that seems to attach to business interests but has matured into a conspiracy theory. American majorities oppose all of this (as I showed in this article), and I do as well, but if you somehow do not, then you want four more years of this.

Trump has started no new wars. He made a morally reprehensible mistake in abandoning the Kurds in Syria, and he’s done nothing to end the war in Yemen, but he showed a healthy hesitation to send soldiers into battle, especially in the Middle East. The US-led coalition managed to rout the Islamic State terrorist group in Iraq mostly with airpower, and he is trying to wind down the interminable war in Afghanistan (the Taliban, as if aiming for ink in the Onion, has now endorsed him). He also approved the hits on Iran’s top bad-guy general Qassem Soleimani and Islamic State’s demonic leader Abu Bakr al-Baghdadi, neither of whom will be missed even by America’s most liberal (sadly, Trump sounded like an oaf at the Baghdadi announcement, which inspired a side-splitting video comparison to the more decorous Barack Obama announcing the killing of Osama Bin Laden). Considering Trump’s apparent ignorance, impatience with intel, distrust of experts, impulsiveness, pridefulness, and questionable moral fiber, this record could have been significantly worse.

Trump moved the needle on Israel. He moved the US Embassy to (West) Jerusalem, which put an end to the odd situation in which outsiders tell a country what its capital is. He recognized Israel’s annexation of the Golan Heights, which is one of those occupations that probably needs to stay, considering the state of things in Syria, which may never again be a country. Now he engineered peace treaties between Israel and the United Arab Emirates, Bahrain, and Sudan – which also compelled Israel to abandon damaging plans to annex bits of the West Bank (plans which Trump himself actually set in motion with initial hints he would accept it). All this has been criticized as blatant favoring of one side in the Israeli-Palestinian dispute, but I judge it less harshly: it is not necessarily bad to shake up the Palestinians in hopes of divesting them of certain kinds of mulishness that have impeded peace efforts. But it has also helped Prime Minister Benjamin Netanyahu. Considering his corrupt and divisive rule, and the fact that he is leading Israel to ruin (see argument here), there certainly are some Israelis who hope Joe Biden will unseat Trump because they figure Netanyahu will karmically be next.

Trump has done plenty of “stupid shit.” Obama’s administration famously strived not to, and Trump seemed to want nothing as much as to be the anti-Obama – a goal he has achieved. Following up on his Paris accord stupidity, he pulled out of the world powers’ agreement with Iran, badly harming America’s reputation and freeing Iran to pursue a nuclear bomb that is now more likely, not less, to land upon our heads. He gave North Korea the free gift of cancelling military exercises with America’s ally in the south. That was part of a pattern of coddling dictators, the most prominent of which is Russia’s Vladimir Putin, whose boots have been licked so energetically that most Americans think he has dirt on the man in the White House. He slapped tariffs on China that Americans pay for, not Chinese – a basic fact he appears not to understand. He continues to blather on about Mexico paying for a border wall (but immigration is down, both from the south and due to overall asylum policy and a semi-“Muslim ban” that actually somehow has squeaked through the courts). And then comes his horrific mishandling of the coronavirus – that is stupid shit that has cost hundreds of thousands of lives.

Trump is the most vile personality to ascend to power in a Western nation since 1933. Trump lies so often and so casually that it goes beyond mere untruth and political machination and looks more like a plot to drive the country crazy. There is no precedent to it in modern history. Add to that the cruel nicknames to rivals, the boasts about sexual assault (and the many allegations), the hush money to a porn star, the conspiracy theories, the profiteering off the presidency, the appeals to foreign governments for dirt he can use, the dog whistles to white supremacists (the amazing statement “stand down and stand by“), the loyalty tests, the obsession with who liked him and who treated him well, the constant need for credit, and the indifference to human life. There have been numerous efforts to psychoanalyze him and it’s not pretty: there is clearly a disorder, and it is clearly a disgrace.

Trump would be happy to steal the election. He has been spreading lies about postal ballot fraud while striving to undermine the US Postal Service as part of a transparent scheme to gum up the works with legal challenges to the record-breaking postal vote and gin up shenanigans in which perhaps states appoint electors regardless of the actual vote and the newly super-conservative Supreme Court somehow allows this to stand. How many people doubt Trump would burn down the Capitol if that suited his purpose (“Lotta bad people there, maybe they did it themselves, that’s what people are saying”)? How many people can even envision him graciously conceding an election he lost? Trump has made a banana republic of the United States (“Sad!”).

So here’s what we have: Other than with the pandemic, Trump’s policy record is (while horrifying to a liberal person) not as indisputably horrendous as it might have been; if you like Republican (and Likud) policies you have reason to be well pleased. In that sense he is surprisingly similar to other Republican presidents.

Where Trump becomes unique – where he achieves a form of greatness – is in the vileness of his persona and its corrosive effect on society. There is simply no way to explain him to our children. The example he sets almost literally could not be worse. In this way, along with the election-stealing business, he is a true danger to democracy.

I have wondered on these pages whether liberals would tolerate a Trump of their own: would they indeed embrace such a charlatan in exchange for, say, gun control and universal health care? I think it is a question of degree, and I would hope that if the degree of vileness were as extreme as with Trump, the answer would be no.

Decency is not a luxury.

With that in mind, let us hope that this emerges as the ultimate Trump scorecard in both senses of the word.