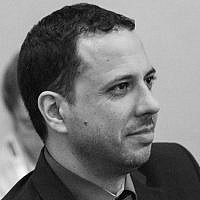 The Blogs
Itai Reuveni
Apply for a Blog
Advertisement
Please note that the posts on The Blogs are contributed by third parties. The opinions, facts and any media content in them are presented solely by the authors, and neither The Times of Israel nor its partners assume any responsibility for them. Please contact us in case of abuse. In case of abuse,
Report this post. 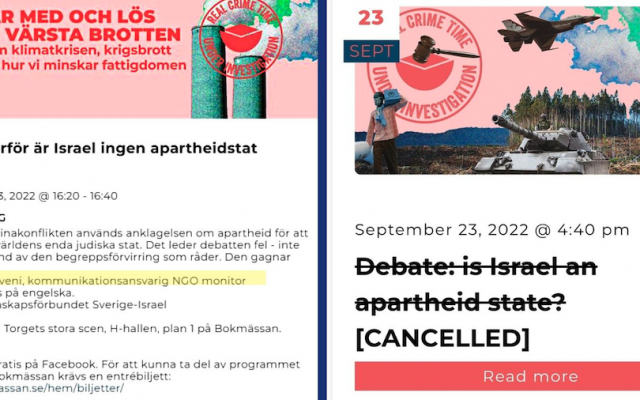 “Long Live the Word!” This was the slogan of the Göteborg Book Fair, which was meant to be “a tribute to freedom of expression and a place for readers and writers to meet and celebrate the power of stories.”  This commitment to the cause of freedom of expression was enshrined on the ribbons that participants were asked to put around their necks as they attended one of Scandinavia’s most influential and important cultural events.

But this is not a story of freedom of expression. It is a story about cancellation and censorship, about freedom as a privilege granted on the basis of political affiliation and denied to the “wrong Jews.”

The Göteborg Book Fair, which was held on September 22-25, was primarily funded by the Swedish government’s development agency, SIDA. It gathered organizations from different world regions and political identities, whether from South Africa or the Ukraine, defenders of women’s rights, advocates for the Baha’i communities of Iran and Afghan refugees, or various church groups. At the Global Square, located on the second floor of the exhibition space, hundreds of organizations, each with their own kiosks, encouraged attendees to get acquainted with their work and raise awareness about their political or social causes.

Since no European event is ever complete without the participation of Palestinian advocacy groups, approximately 10 anti-Israel organizations were present at the fair, all hostile to the State of Israel in varying degrees. Only one pro-Israeli group stood among the participants in the Global Square part: The Sweden-Israel Friendship Association (VSI).

As VSI’s guest, I was invited to offer my analysis and expertise on the Israeli-Arab conflict, provide counterarguments to the overwhelming anti-Israel narrative, and introduce NGO Monitor’s research on the apartheid slur that has become de rigueur in certain circles concerning Israel.

Only 50 meters from the VSI kiosk stood some of the most notorious anti-Israel NGOs, including Ship to Gaza, Björkåfrihet, Jews for Israeli-Palestinian Peace, Svenska Palestinakommittén, the terror-affiliated Jenin Theatre organization, and Amnesty International. Another prominent guest was in attendance: a representative from  B’Tselem, one of the main Israeli NGOs promoting the apartheid slur against the Jewish state.

It is worth noting that most of the material presented by those organizations involved misinformation, distortions, and oversimplified, one-sided rhetoric. These NGOs ensured that Israel would be consistently portrayed as a villain and used as a scapegoat to fuel their propaganda.

A number of lectures and presentations were also held, including “A testimony on life in Hebron,” “Apartheid and Occupation,” “Israel Defenders of Human Rights,” a lecture on Gaza with Swedish flotilla activists, “Culture in Palestine,” and “Climate Justice in Palestine” – a talk ridden with blood libels and misinformation. Segregating themselves in an ideological echo chamber, these activists refuse to be challenged or accept the existence of other worldviews.

My host took a very different approach. VSI chose to engage with the book fair so that people could exchange ideas and explore new concepts. The purpose was to provide participants with the very thing they supposedly came for: an intellectual debate on the apartheid campaign against Israel.

The organizers, a group of influential Swedish NGOs tasked to manage the Global Square by SIDA, were originally willing to arrange a 20-minute debate between the Sweden-Israel Friendship Association and organizations that held less favorable views towards Israel.

As the main speaker on behalf of VSI, I made it clear to all that I was prepared to debate anyone, regardless of their opinions or political affiliations. This included B’Tselem, Amnesty International, and even the pro-BDS Swedish NGOs. On Wednesday, September 21, the day before the scheduled debate, the organizers told VSI that B’Tselem had agreed to take part.

But, as it turns out, this was not a debate that B’Tselem or any of the aforementioned NGOs were interested in having.

For decades, the human rights community has built a façade that they are inherently good and will defend civil rights at all costs., But this façade hides something else altogether: fierce opposition to any criticism. Human rights activists became accustomed to being the sole players in the field, able to spread their versions of facts and moral principles unchallenged.

I, of course, demanded to know what happened. How could it be that SIDA and its NGO allies heeded the demands of those opposed to divergent opinions and who use their power to silence civil discourse and debate — essential components of any democratic society? I approached the organizers, who claimed that change stemmed from a “technical issue.” They claimed: “We didn’t know that it would be someone from NGO Monitor” — even though my name and affiliation were listed on the book fair’s website. They said, “We didn’t have time to do a background check on you,” as if I were a criminal.

Beyond the embarrassed smiles, everyone knew that nothing here was technical. As if there were any doubt, the next day, the organizers cancelled all VSI appearances on the main stage, leaving the 20 minutes for the Amnesty and B’Tselem “apartheid” propaganda, and cancelling the presentations on the pro-Israeli side. 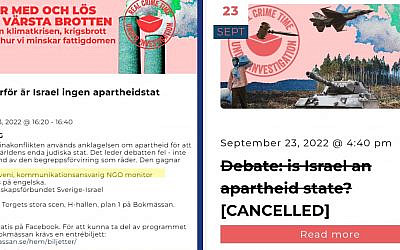 The Strange Case of the Guy from B’Tselem

After the Swedish media got wind and started asking questions, one of the management employees quietly admitted to me, “These NGOs became very frustrated when they knew you were here.”

Throughout those three days, I was standing near the VSI stand, which featured a big Israeli flag. Hundreds of people came. Some were friendly, some were not. Some were indifferent. We even came close to having a physical confrontation when a Jihadist high school student almost hit a Holocaust survivor, but refrained from doing so when he noticed the security guards.

I spoke with Afghan refugees, Somalian high school kids, and Palestinians. There were some good discussions, hard questions, and interesting interactions. There was also the Swede of Palestinian descent who insisted that I should look into the details of a particular camera invented by Jews that can detect someone’s feelings and systematically kills Arabs. And the Turkish boy who said that he had just heard in one of the panels that Israelis poison Palestinian lands with toxic waste.

But as opposed to other anti-Israel attendees, those last two stayed and were willing to be challenged.

Which brings us to B’Tselem’s refusal to engage in a meaningful discussion about its work.

The day before the scheduled-then-cancelled debate, a B’Tselem staffer walked slowly into the pro-Israel section. It was hard to miss his contempt for the Israeli narrative. Shortly after I began to talk to him in a very respectful manner, I noticed that this man was simply repeating the same message-box, even in a private conversation.

He kept making derogatory comments such as: “You blame my friends for being terrorists!” and “What do you know about apartheid?” and “You are not important enough to be blamed  for war crimes!” He also kept stressing the fact that we are not friends. He clearly felt uncomfortable when I smiled at him and said, “I can’t wait to have a debate with you tomorrow.”

A debate?! I had just mentioned the forbidden word. He suddenly understood that his anti-Israel narrative was going to be challenged. Two hours later, the cancellation order came. Apparently the word “debate” is unacceptable. .

A book fair. In Sweden. Funded by the Swedish government. A place where ideas are meant to collide and coexist. The forum is an appropriate venue for debates and arguments, especially when one bills itself as a “liberal human rights organization.”

But when it entails the only Jewish state, a debate is seemingly out of place. Challenging ideas and stereotypes is forbidden. Everything has been said, the verdict has been decided. What remains is to keep spreading falsehoods, all in the name of freedom of speech.

B’Tselem and Amnesty and the other NGOs throwing around the apartheid propaganda have repeatedly stated that their opponents are unable to challenge the substance of their claims. (This is false, by the way. See reports from NGO Monitor here) However in Sweden, B’tselem and Amnesty aggressively prevented any such challenge from taking place.

The American economist Thomas Sowell once said, “It is usually futile to try to talk facts and analysis to people who are enjoying a sense of moral superiority in their ignorance.” This was the exact feeling I had when the cancel order came. European-funded NGOs are the living embodiment of that quote in their political warfare against Israel. They have no willingness or confidence in their ability to listen to criticism and step foot outside their ideological echo chamber.

About the Author
Itai Reuveni is an expert on social movements, civil Society, NGOs role in conflict, NGO funding and Antisemitism. He is the Director of Communications in NGO Monitor, a Jerusalem based non-profit research institute. Previously, he was the director of the Israel Research Desk in the institute for more than 7 years. Alumnus of the International Visitor Leadership Program, a prestigious program run by the United States State Department that deals with issues relating to the promotion of human rights.
Related Topics
Related Posts