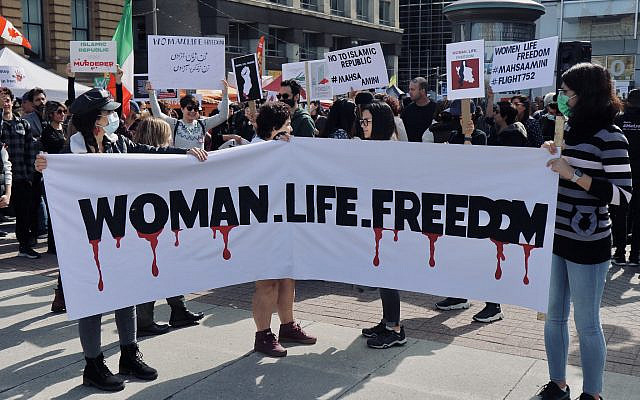 The very movement so many experts assumed would die out under the regime’s guns has now captivated the world’s attention, so much so in fact that even Hollywood answered Iranians’ call for support, lending its glitz and glamour to the cause of the unspoken. On most lips,  the song ‘Baraye,’ the words of which have come to symbolise Iran’s freedom movement and brought to light the oppressive nature of a system that claims itself holy over its people. Its authority and legitimacy challenged, Iran’s absolute theocracy is fighting for survival. For millions that means unfettered violence.

And since it is women who first came charging against the proverbial barricades, demanding that they’d be let go from under the thumbs of the mullahs and their antiquated rules, it is women the regime now aims to repress most brutally – so that a nation would learn that none should dare question Ayatollah Ali Khamenei’s monopoly on power.

The man who calls himself the Imam has unleashed his militias on female protesters, arguing ad nauseam that their rebellion is an affront against  G-d, and as such should be met with utmost resolve – a euphemism for abject human rights abuses.

With clerics now advocating for the use of acid against those daring to defy the mandatory headscarf (hijab) the stakes are considerably higher – our reluctance to hold the regime accountable, evermore disturbing. And although one could argue that Western capitals did in fact rise to the challenge, slapping Iranian officials with further sanctions, such political grandstanding did little, if anything at all, to change dynamics on the ground. Alone, defenceless, exposed, and most worryingly cut off from the world under a communication blackout, Iranians have been left to fend for themselves.

In just over 6 weeks of protests, Iran’s prisons have reached capacity, forcing IRGC and Basij (volunteer force) to employ more drastic methods of repression to crack down on the revolutionary movement – mainly torture and sexual violence.

Today rape has become a tool of repression, a despicable means to a terrible end to ensure that women and girls would abandon their fight, and submit once more to a regime which denies them their humanity. Proof of such ill-treatment first broke onto our screens a couple of weeks ago when police officers were seen molesting a young woman as they proceeded to arrest her.

The video, which went viral on social media, was taken in Tehran’s Argentina Square, showing a group of officers in protective gear and helmets surrounding a woman on a main road. As one anti-riot police grabbed her neck, another stepped behind her, running his hands all over her.

While such abuses by police in Iran are common, most predominantly against ethnic or religious minorities, they usually take place behind closed doors, away from the public eye so as not to prompt public outrage … but not always, and certainly not lately.

In June 2018 in the city of Iranshahr (a predominantly Baluchi province), a reported 41 women and girls were gang raped by IRGC. Earlier this September, in Chabahar, a 15-year-old Baluch girl was brutally raped by a police officer after she was called in for questioning.

From Evin prison where hundreds of women are currently being held, testimonies of ill-treatment are slowly coming out, each more terrible than the next.

One woman, let’s call her Firouzeh, reached out to me through her mother, whom she has been able to remain in contact with while in prison. Her tale, it needs to be said, is that of countless women and girls in Iran – the unspoken victims of a clergy for whom power is worth everything, and for which its men will do anything.

Firouzeh was brought into Evin prison a little over three weeks ago after she was picked up by police for protesting against the regime. Like many protesters today, Firouzeh was tracked down by the state security apparatus after her face was captured by the many CCTVs lining the streets of the capital, Tehran.

Thrown into an interrogation room she was brutally beaten up, her life threatened as well as that of her family. Accused of being a foreign agent, she was told she would be tried for espionage and face the death penalty unless she’d confessed her crimes. While the regime does not of course believe protesters to be agents of the West, such a narrative has catered to the long-held notion of a war between the holy purpose of the Islamic Republic and that of the immoral Western block.

A week into her incarceration Firouzeh was subjected to sexual violence – the nature of which she is not prepared to discuss, other than to say that Evin was a house of horrors, and its keepers, devils.

Thousands of women and girls find themselves in a similar position.

With more calls for arrests and the opening of  ‘rehabilitation centres’ by IRGC across Iran, as prisons are overflowing with new inmates, the risk to women has become exponentially bigger – notwithstanding the fact that the regime has abandoned any and all pretence of restraint.

To think that Iran still sits on the women’s rights commission at the United Nations is incomprehensible. As Hillel Neuer, executive director of UN Watch, a Geneva-based independent human rights group, noted back in March 2022: “Electing the Islamic Republic of Iran to protect women’s rights is like making an arsonist into the town fire chief.”

The biggest sponsor of terrorism, Iran is behaving much like a Terror-state – a notion it may be time we grasp as the violence it dispenses against its own people may soon be directed towards us.