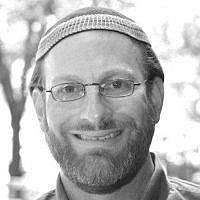 I have been in Israel for work for almost six weeks. One of the many positive aspects of my visit, has been tefilah (prayer) at the Kotel, the Western Wall, which I find very inspirational.

On Friday morning July 29, I went for Rosh Chodesh, prepared to be uplifted. As I was praying, however, I started hearing loud noises. I did not know what was going on at first. I thought, God forbid, it might be a terrorist attack.

Then I found out what was happening. The Women of the Wall were having their service and they were being harassed by a group of so-called haredi men and women. Haredi is an adjective in Modern Hebrew derived from the verb hared, a Biblical Hebrew word meaning to tremble. As in to tremble before God.

I say “so-called haredi” men and women, because people who behave like this do not tremble before God. Obviously mistreating people is wrong. The police should stop this degradation. From what I saw, they did a good job. I do not know what it was like from the perspective of Women of The Wall.

Clearly as an Orthodox Rabbi I do not agree with everything Women of the Wall are doing. However, their rights should be protected. Furthermore, when such devaluation occurs, the wholeness of the Jewish people is challenged. As I contemplated this issue, I found myself chanting from Tehilim (Psalms) 133:

A song of ascents of David. Behold, how good and how pleasant it is, that sibling’s dwell together. It is like fine oil on the head running down onto the beard, the beard of Aaron, that comes down over the collar of his robe; like the dew of Hermon that falls upon the mountains of Zion. There the LORD ordained blessing and everlasting life.

The first line, “Behold, how good and how pleasant it is for siblings to dwell together,” is about achdute (unity). We are in need of achdute right now, in Israel and in the global Jewish community. Clearly the Psalm is a plea for unity. But such a plea is meaningless unless we make every effort to bring people together. Our prayers must be followed through with actions.

Furthermore, let us not forget, unity is not the same as uniformity. Diversity is essential. We do not all have to believe in the same ideological positions to achieve achdute. We need to respect each other with our differences.

I have always loved that phrase:

Behold, how good and how pleasant it is for siblings to dwell together.

As a young person it was one of my favorite Jewish songs. When we used to sing it in large gatherings at camp and in youth group, I almost felt that it worked. We came together, in those moments, no matter how different we were, (we probably were not all that different).

Later on, life became more complex. That path to achdute became more elusive. However, the song’s message is still powerful. It became a central idea upon which I have built both my rabbinate and my entire life.

Yet lately, I have become confounded by the concept of unity. How do we achieve achdute here in Israel and in the diaspora?

This incident this past Friday is not an anomaly. Comparable events have taken place, previously by haredim, against Women of the Wall and Reform, Reconstructionist, Conservative, Jewish Renewal, Jewish women, and even certain types of Modern Orthodox Jews. On June 30, a particularly horrific episode unfolded at a service for a young man who traveled with his family from America to celebrate his Bar Mitzvah. These Jewish brothers and sisters are affiliated with the Conservative movement. A group of haredim screamed during the egalitarian service, calling the participants in this service “Nazis,” “Christians” and “animals.” They blew whistles and ripped up prayer books.

What makes this event even more problematic, on a certain level is that it took place, at the Southern part of the Kotel, Robinson’s Arch, also known as Ezrat Yisrael, a special area of the Western Wall, set aside for different types of prayer. How my heart breaks for Seth Mann, the Bar Mitzvah boy, and his family. Although, I understand he did a great job, (Yashar Koach, Seth!), I would like to meet Seth, his family, their Rabbi, Felipe Goodman, and wish them a Mazal Tov and discuss this situation with them. Seth’s father Joel wrote a very important article about what took place.

Such acts of aggression towards more liberal Jews at the Kotel is nothing less than a Chilul Hashem, a desecration of God’s name. Let us not forget that we are in the period of Bein Ha Metsarim, (literally, between the straits), the three weeks from Shiva Asar B’Tammuz (the 17th of Tammuz) to Tisha B’Av (the 9th of Av). This is a time of national mourning. The centerpiece of the mourning is the destruction of the First and Second Temples. According to the Talmud Yoma 9b, the Second Temple was destroyed because of the sin of Sinat Chinam, baseless hatred. When Jews who worship differently are accosted by their fellow Jews, this is nothing less than pure unadulterated Sinat Chinam.

It is simply wrong, when Jews who have a different approach to Tefilah (Prayer) are praying or celebrating a Simcha (joyous occasion/life cycle event), are embarrassed and abused at the Kotel. It is incumbent on Orthodox Jews to raise a voice of moral conscience. We must insist that the state of Israel provide the necessary policing to protect such families. Furthermore, not only must the authorities deploy officers to these assignments, but leadership must also make sure that police do their job. The fact is, there were officers present, at this Bar Mitzvah and they did little to stop this attack. In the meantime, I call upon all Orthodox Jews at future services to act as human shields between these disrupters and our liberal brothers and sisters.

On Shabbat morning several weeks ago, I went to another service at the Kotel. This was a very early service, at Hanetz Hachamah (sunrise). As I made my way down to the Kotel, I saw a very large number of Muslims going up to Har Habayit, the Temple Mount. Muslims refer to Har Habayit as “Harem El Shareef” (the noble sanctuary). They were praying in the El Aksa Mosque, on the South side of Har Habayit . I inquired what was going on, and I found out that it was Eid El Adha, a holiday commemorating God asking Avraham to sacrifice Yismael (Ishmael), the end of the Hajj, the pilgrimage to Mecca. Muslims also visit the Dome of the Rock on this day, believing that from the rock Mohammed rose to the seven heavens. There was not one incident to the best of my knowledge. Everyone prayed in their own way in this general area in their own designated spots.

I do not mean to oversimplify. I know there are people in both faith communities who probably did not appreciate each other at the time or in general. In fact, there are a number of Jews who feel it is wrong that they do not have the right to pray anywhere on Har Habayit. The Israeli Government is concerned about violence. After Israel reunified Jerusalem in 1967, a complex relationship between Israeli authorities and the Islamic Awqaf Council has existed, where the Waqf commits to keep a delicate balance in which they permit non-Muslims to visit, but not pray on the Temple Mount. Jews who wish to worship there feel this is wrong. They feel, that since the actual Temple was there, that this is the area of actual holiness, not the Kotel, and their religious rights are being violated. Nonetheless, there was not an incident when Eid El Adha coincided with early morning Shabbat services. Knowing all of this, I was still moved by the fact that there were no problems, and that Jews and Muslims were praying to God, not exactly together, but adjacent to one another. I thought of the verse from Yishiyahu 56:7, “I will bring them to My sacred mount. And let them rejoice in My house of prayer. Their burnt offerings and sacrifices shall be welcome on My altar; For My House shall be called a house of prayer for all peoples.”

I do not have all of the answers. In fact I do not even know if I have any of the answers. All I know is that we have to keep asking the questions and that at the very least we must continue to work towards the goal of achdute no matter how insurmountable it might seem at times. And let us also sing…

Behold, how good and how pleasant it is for siblings to dwell together.