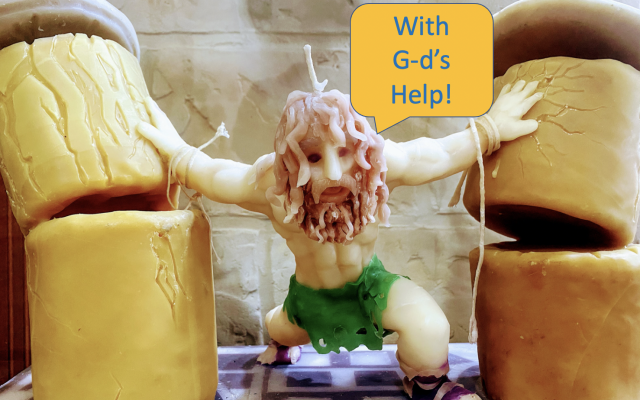 For two thousand years, the Jewish people exiled from their land, widely dispersed, and inhumanly persecuted among the nations developed passivity and learned helplessness.  They eagerly awaited, year after year, G-d’s salvation and redemption.

As a tiny minority attempting to hold firm to their religious beliefs amongst the world’s powerful majorities, the Jews found themselves a convenient scapegoat, suffering landlessness and joblessness, taxation to the point of near-starvation, conscription of their Jewish children for military service of 25-years, forced conversion on pain of torture and death, horrible violent pogroms that sparred no one, and expulsions from country after country.  During these times, the Jewish people learned passivity in the hope of not inflaming the hate and anger of the goyim that would make things “even worse!”

The famous Jewish author, Haim Nahman Bialik wrote in “In The City of Slaughter” about the Kishinev pogrom of 1903 and the Jewish state of helplessness and passivity, noting that the husband and brothers hid behind barrels while the women were raped and murdered. At this incredibly low, sunken point of our history, and as the blood flowed all around them, they could make no move anymore even to defend themselves from the worst butchery and depravity inflicted upon them and their families.

Unfortunately, this incredibly painful and very deadly persecution of the Jews was being fed at the same time by yet another dynamic, that of mistaken religious belief: one that held that G-d would do whatever he wanted to His people, including punish them, and would redeem them by His hand when He was ready, and aside from Torah study, prayer, and the following of the Commandments, the Jews were not to take any active stance or do anything themselves to, in effect, change the tide, because it was “all in G-d’s hands” anyway.  Unfortunately, our genuine attempt at being religiously faithful led to a personal sense of helplessness in life and loss of our own earthly accountability.  Somewhere, we forget the noble and absolute creed that “G-d helps those who help themselves!”

But around the turn of the 20th century, the Zionist movement arose with fresh thinking from those of Theodor Herzl, Ze’ev Jabotinsky, David Ben-Gurion, and others that came to a new conclusion about the fate of the Jews, which was that the answer to anti-Semitism was that the Jews must once again have their own state, and that this needed to be actively pursued–both politically, but also by force, if necessary.  This notion was hammered home then by the murder of 6,000,000 Jews in the Holocaust, and the bursting feeling inside the survivors that we will no longer go like sheep to the slaughter–“Never again!”

The early Zionists therefore anchored their efforts in the labor of their own hands –working the barren land and in the malarial swamps to once again make the deserts bloom, building a strong army from Holocaust survivors with tattooed arms of Nazi identification numbers, and innovating in science, medicine, technology, the arts, and more.  The early founders of Israel settled on Kibbutzim and the image of muscular, sun-tanned Jews working to survive and thrive became the new normal or almost a “Super Jew.”

However, even the mighty Samson in Judges 16:28 recognized that G-d was behind his strength and success at defeating the Philistines, as he said:

O L-rd G-d, please remember me, and please strengthen me only this once more; O G-d that I may be avenged on the Philistines for my two eyes.

Nazarite or super Jew, the hard work and bravery needed to be coupled with an understanding that G-d was the ultimate source of Samson’s strength and ours!

Nevertheless, after we won the 1967 Arab-Israeli War, when Jerusalem, the West Bank, Gaza, and Golan Heights once again became ours, further restoring the borders of the Promised Land, the multiple personality disorder of the Jews continued.  On one hand, some politicians urged restraint so as not to incite international condemnation, along with many on the ultra-orthodox Haredim and even traditional orthodox Jews that continued to view faithfulness as passively waiting for G-d’s divine intervention and Mashiach.  On the other hand now, the religious settler movement arose under Rabbi Tzvi Yehudah Kook and the Gush Emmunim (“Bloc of the Faithful”) that rejected Jewish passivity and instead saw the return to the Jewish homeland and the ingathering of our exiles as a sign from G-d, and they in turn sought to actively do their part and resettle the Biblical lands that were again, miraculously, in Jewish hands.

In modern day Israel, it is common to hear about Israelis fighting for the State of Israel to actively defend themselves, but there is seemingly little mention of G-d, and this is a spillover of the early Zionists belief that we, ourselves, must take responsibility to work hard and fight hard to safeguard our nation that was spared from near-extinction.  Unfortunately though, I believe that this has gone too far in the other direction, where institutionally in Israel (e.g. in the IDF and from the politicians) we don’t rightfully and regularly hear an acknowledgement of G-d in bringing us back to the Promised Land, helping us to make it flourish, and to thrive in every way almost as the reinstatement of the Garden of Eden itself.  Even this week, at the Abraham Accords peace deal between Israel and the UAE and Bahrain in Washington, D.C., I was pleased to hear Prime Minister Netanyahu, who is also a real hero, say that Israel was “very strong” and that this had helped to create an atmosphere for achieving peace.  But what I would have also liked to hear him say publicly, is a big thank you to G-d Almighty for yet another miracle wrought for Israel and the Jewish People in advancing peace and right before the Jewish New Year!

Certainly, there is no mitzvah to being passive and helpless, and this was undoubtedly in large measure a result of being homeless and suffering under the weight of relentless and brutal anti-Semitism for 2,000 years.  Yet, as we each roll up our sleeves to actively work and fight for the modern State of Israel, our independence, and our right to practice our religion freely, we must do so with full knowledge and thanksgiving to G-d, our creator and sustainer!  Whether King David against the giant Goliath, Samson against the mighty Philistines, or our modern-day strong and brave soldiers in the IDF defending the borders of Israel from historical enemies’ roundabout, they stand strong against all the natural odds, because G-d stands right there with them and us.