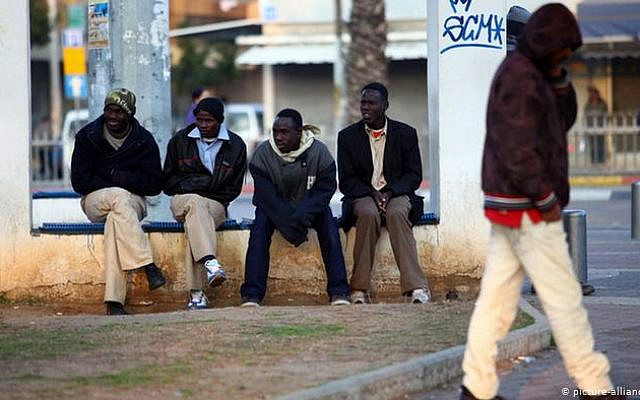 During the past twelve months, I interviewed people in Shapira to see how they wound up there and what they think of the things happening in the neighbourhood. Here’s what they had to say.

We had our shop here in Shapira for forty years, always in this same place. My parents used to run it before me but they’re dead now. Business didn’t really change in all that time. It’s the same actually. Sometimes you have good days and other times it’s a little too quiet. We are lucky though, we sell mostly to other shops and businesses. Sometimes they are having a hard time and we feel it but then they always need stuff to sell. Even if no one is buying, they have got to buy stuff from us.

Business didn’t change but the neighbourhood did of course. It became more of a place for people to live. It didn’t use to be like that. If you look outside and down the street, all along the road there used to be different businesses. Small shops and factories, you know, where people make things. You can even see one next door. It’s shut now but it still has all of its signs and everything.

The people that ran those businesses left. To Holon [a city south of Tel Aviv] and places like that in the suburbs. They made money, you understand what I mean? So why would you stay here? At least that’s how they think. They moved up in the world so they think they have to leave. And when they left, all their businesses, they became apartments and houses, places for people to live in.

That happened even before the Africans came here. Actually, the people that moved in after they left were also illegal workers but they were not Africans. They were from Eastern Europe – Bulgaria, Romania, places like that. Then the government saw that there were all these people here and they decided to do something so they threw them out of the country. But then after that happened, all the Africans came.

The Africans are going to be a real problem. This country is sitting on a time bomb and we don’t even realise it. The government doesn’t realise it for sure. There are so many of them already and now you see that they have had so many children too.

I heard some people say that there are 60,000 of them here in Israel. It’s not true, no way. There are at least 100,000 of them for sure – just look around! They had a big protest at the Knesset not that long ago. There were buses and buses of them that were sent there. People tried to count how many of them there were but they couldn’t even do it, there were so many!

The problem in Israel is that the leftists here are always helping them – always. They only think about ‘the humanity’ and theories. Everything with them is a theory but not reality. And that’s the problem. Things are nice in theory but that doesn’t mean they are in reality. So those left-wing people, they all live in nice areas, in north Tel Aviv or wherever. They don’t have to live with the Africans. And the Africans know exactly how to butter up the leftists to get them on their side, using their children as shields and things like that.

Actually, the Africans here have a very good life. The problem is that they are not coming here because they love Israel. They just ran away from their military service because in Eritrea you join the army and that’s it, there’s no end to it. So they come to Israel to escape that and because, for them, it’s a good life. It’s good money and there is no army. But they don’t feel any loyalty or sense of duty to this country and that’s a big problem.

They also know how to take advantage of the system. Go outside and walk around. They are opening shops and restaurants all over this neighbourhood and beyond – even in places like Neve Sha’anan and HaTikva [other areas in south Tel Aviv]. Do they get permission for it? No. Are they paying any taxes? No. They can do whatever they want and they will get away with it. And they know they’ll get away with it too because the government doesn’t know what to do with them.

They are also clever because they know that they are needed in some way. They do all these small jobs in restaurants, hotels and things like that. The washing, the cleaning, the cooking. Israelis won’t do those things. I don’t know why. Maybe they think they are too good for them. But the Africans will do it and they know we won’t. So they work for you maybe one year. Then they’ll go and get a lawyer and start demanding more and more rights. It’s true, really. I have friends that this happened to. That’s why I’ll never hire them, it’s just going to be a problem. They even come in here sometimes to buy stuff and every time they ask for a stupid price which is way too low. What? You don’t work? You can’t pay for things like a normal person?

It will not end well for sure. Now you see that they have roots here because of their children. Those kids speak and dream in Hebrew – they don’t know another language. And they have so many of them. We are just a small country and there will be 1 million of them here soon, I am certain of that. They came here to conquer and that’s what they’re doing.

You know that when they first came ten years ago or so, many leftists came to help them. A lot of them were young women, 17 or 18 years old. One of them was teaching them or something. She’s there for 30 minutes maybe and then the kids get bored so they start beating her and kicking her. What kind of people do that?

They are wild people. They are not the sort of people that you can give them something nice, like me or you, and they will say “thank you so much, that’s very generous of you.” They take what you give, try to take advantage of you and then act in this wild way. And you can’t get that out of them. Being wild is not learned, it’s in your DNA.