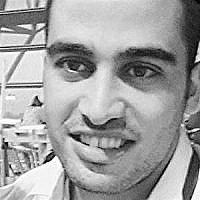 The Blogs
Nisan Avraham
Apply for a Blog
Please note that the posts on The Blogs are contributed by third parties. The opinions, facts and any media content in them are presented solely by the authors, and neither The Times of Israel nor its partners assume any responsibility for them. Please contact us in case of abuse. In case of abuse,
Report this post.

If we want to understand the profound ignorance in understanding the Arab-Israeli conflict, we should read the post written by Secretary-General of left non-governmental organization in Israel “Peace Now” – Yariv Oppenheimer on his twitter profile. He claims that the recent terror attacks by “Palestinians” towards Israelis in recent weeks are because of the Israeli “occupation”. This argument is accepted by many people in the West, leaders, the media and human rights organizations, even some of them think that the actions of the “Palestinians” can be justified. Substantial amounts of western media refuse to call these actions terrorist and to condemn them; instead the media presents terrorists as victims. In other words, because of the “oppression” of the “Palestinians” by Israel, Arabs are outraged against the Jews and these attacks are simply protests; these claims are ridiculous and unfounded.

I want to talk about the process that started during the 1920s and ended in the 1930s, the process of the ethnic cleansing of the Jews in the Middle East by the various Arabic active movements since WWII and about the Jewish communities in Islamic countries. It is impossible to blame this oppression on the “occupation”, of course is not possible, that was pure hatred and terrorism against Jews, because at that time there was no “occupation”. Jews lived as a minority oppressed and persecuted, not only during the 20th century but in previous centuries before for thousands of years, killings, looting and rapes were part of the life of Jewish communities under Muslim Institute, Pogroms against Jewish communities in Muslim countries are rarely mentioned in Jewish Historiography.There were many pogroms against Jews in Islamic countries for example just to mention a few, in the first years of the 20th century a long series of murders against the Jews of Morocco – the city of Taza in 1903 (40 killed), the town static in 1907 (50 killed) and Casablanca in 1907 (30 killed). Just for comparison, the Kishinev pogroms, as well mentioned in Jewish History 49 Jews were killed. Perhaps the worst for me personally was a Pogrom where my grandmother was present – “Farhud”: refers to the pogrom or “violent dispossession” carried out against the Jewish population of Baghdad, Iraq, 179 Jews were killed in 1941 and 2,118 Jews were injured including my own Grandmother. The Muslims that shouted during this time “Jews to Palestine” and “we want to clean Iraq from Jews”, 80 years later, the Muslims now say that we have nothing to do with “Palestine” and it is a mystery to them why we are here.

I wonder where this place is? That according to the opinion of the Muslims, we can live?

History of the Jews in Islamic countries actually disprove the claims of the Arabs, and according to their claims until Zionism “everything was fine”; Jews have lived in peace and harmony under Muslim rule, claim the  “Palestinians”;  that Zionism has created the conflict. Well Zionism was not the problem, but the solution. The Jews from Arab countries are mostly Jews who were forced to leave the place they were born and lived and became refugees without property but the Jews were lucky enough to have a place to escape to – a national home of their own.

So what do we have?

Terrorism against Jews without Israeli “occupation” , and the myth that Jews lived in harmony and peace in the Muslim countries.

At the same time of the pogroms against Jews in Arab countries, Amin al-Husseini who was a Palestinian Arab nationalist and Muslim leader in Mandatory Palestine, the leader, was a fanatic with a total ideological foundation of religious fundamentalism and quite cohesive. He quickly developed not just beliefs in anti-Zionism but also was extremely anti-Semitic and he began to see the conflict as a religious war. After Hitler’s rise to power in 1933, he visited the Mufti of Jerusalem, Haj Amin al-Husseini, founder and head of the “Palestinian national movement” in the new German consul in Jerusalem, and was the first to congratulate him. In meeting the Mufti informed him that the Muslims in “Palestine” and elsewhere welcome the Nazi regime in Germany, and they hoped that the system of governance of the fascist and anti-democratic spread to other countries. The Mufti and his entourage expressed admiration for Nazi Germany, because of anti-Jewish policy, and because they felt that Hitler would try to will wipe out the Jews in his country, they asked Hitler if he would prevent any possibility of emigration of German Jews to” Palestine”. This meeting was the beginning of a beautiful friendship. He brought Nazism to his own country; Al-Husseini organized the “Nazi Scouts,” based on the “Hitler Youth.” The swastika became a welcome symbol among many “Palestinians”. He called for terrorism against Jews, with Al-Husseini using WAQF and orphan funds to recruit bands of militants to attack Jewish settlers. In the beginning the targets were defenseless Jewish civilians in hospitals, movie theaters, homes, and stores. This was followed by strikes and shop closures, and then by the bombing of British offices. Between 1941-1944 Husseini lived in Berlin, next to Hitler and Eichmann.

Now we can assume that the “Palestinians” are an “oppressed minority” as that the is the belief of many Europeans and other Western countries, this is the same Europe that persecuted and murdered the Jewish minorities throughout history, during World War II Europe became a cemetery for Jews. The Germans and their allies in Chelmno, Belzec, Sobibor, Treblinka, Majdanek, and Auschwitz-Birkenau, tried to burn thousands of years of civilized history.  Even after all of this Jews have never sent terrorists to Berlin or Munich or to other cities in Europe. Jews have never attacked German tourists in Israel, Germany is one of  the best allies of Israel at this time, bilateral relations based on common faith, Western values, and cooperation in economic and military (exports to Germany is more than 6.8 billion NIS).Berlin is also the most popular destination for Israeli tourists in Europe. The Israeli educational system has never taught the students, to be anti-German or anti-European, in contrast to the “Palestinian” education system that indoctrinates students to be anti-Semitic and to embrace terrorism and violence. Also Jews have never sent terrorists to London in revenge for the British occupation in the land of Israel, Jews have never harmed British children, women or men out of spite ; Zionist organizations were fighting only against the British army in defense, in order to get independence, the majority of Jews in the land of Israel have collaborated with the British because they knew that war leads to disaster and not for freedom.

Actually, the terrorist attacks against Israeli civilians that is happening currently and in the past, is not down to what “Palestinians” lie and claim is a genocide or oppression because of religion. The Imams require and encourage them to kill Jews, they are not willing to tolerate Jews on the Temple Mount, despite the fact that last year 12 thousand Jews had visited in the Temple Mount compared to the three and a half million Muslims; “Palestinians” and Arab countries think they have a monopoly and control on the various holy places and sites. The “Palestinians” with intolerance and religious fanaticism refuse to coexist in Jerusalem, the “Palestinians” have not learned anything from the past, violence, terrorism, religious extremism, organizations such as Hamas and leaders such as Amin al-Husseini, Arafat and Mahmoud Abbas, have led the “Palestinians” to reality that they now live in, well they can always blame the “occupation” instead of the true perpetrators, themselves.

About the Author
Nisan Avraham is an Israeli citizen who has served in the IDF in the Golani unit. He currently works in the ministry of Finance and also studies Economics at The University Of Tel Aviv. He has a keen interest in politics and economics around the world but especially in Israel. Nisan is also a political activist passionate about LGBT issues and is a supporter of feminism. Nisan's political leanings are towards the center and supports liberal politics.
Related Topics
Related Posts
Comments