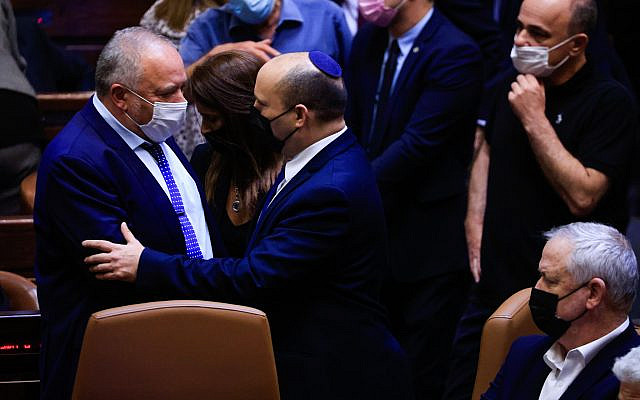 The New Year, 5782, is so close you can touch it. In terms of our tradition, it is not destined to be just any year. Rather, once again, Israel finds itself in a “shnat shemitah,” a sabbatical year. The biblical injunction prescribes “six years you may sow your field, prune your vineyard and gather the crop. But on the seventh year, the land shall have a sabbath of total rest… you shall not sow your field or prune the vineyard, but eat whatever the land produces.”

Shemitah — giving the land of Israel a year off – has always been an inspiring concept. But what does it actually mean in a 9-million person country, where there are only 17,000 farms and less than one percent of the citizens working in agriculture? Based on what I’ve seen in our incipient 24th Knesset, I would like to offer a political interpretation of this year’s shemitah that reflects my hopes for a year of societal respite, reconciliation and healing for our nation.

Israel’s “Government of Change” has been working for two and a half months now. Ostensibly, the only thing the eight parties who make up the coalition had in common was a shared loathing of Benjamin Netanyahu. From the hard-core, right-wing, capitalist Yemina party to the socialist trappings of Meretz, the Knesset members who represent the coalition reflect the deep divisions among their constituents. After decades of demonstrations and acrimony, the country’s pathologically polarized politics left many with a sense that Israel is hopelessly divided and coming apart at the seams.

In shnat shemitah, we stop for a time doing what we need to do to meet our most basic human need, growing food, for the sake of other essential needs: rest, renewal, care for our environment, diminishing the gap between those who have and those who don’t. What made our present government possible is that the parties agreed, at least for a few years, to put the debate over the desirable borders of the State of Israel on hold. Figuring out the future map of Israel and Palestine and reaching peace with our neighbors, if possible, is a basic need. But for time, it has been taken off the table. And, we are beginning to see, that this is allowing us to address other essential needs. And to do so through cooperation and compromises that are healthy, innovative and respectful.

As a professor of public policy, I have always argued that the single best expression of a country’s values and political agenda is its budget. Israel’s 2021-2022 budget will undergo changes before the second and third reading in November. But the budget we voted for in the Knesset last week has a lot of very good things in it. Indeed, it holds many blessings for our country. Here are a few:

Israel’s health system has been woefully neglected for decades. Chronically inadequate funding has left capacity unchanged, even as the population grows 2% each year. The resulting crisis is manifested in patients being forced to sleep in hospital hallways; interns and residents with perilous — and alarmingly frequent — 26-hour shifts; hospital infection rates that kill far more people than COVID-19 due to crowding and poor conditions.

Our new government wants to change that: As a first step, the Ministry of Health is to receive two billion more shekels in its budget. Many more medical positions will be added; two new hospitals are to be built; a collapsing mental health system will receive much-needed support. For almost two years, as Israelis battle the pandemic, we have wished each other “rak briut” (“just good health”) as the only thing that really matters. Finally, there is some expression of this common commitment in how our taxes are spent.

Climate is another area where there is dramatic improvement. For decades, Israeli governments offered up feeble lip service about global warming and did practically nothing to reduce our collective carbon footprint. Even when we joined the international community in the Paris climate accord, our targets were pitifully low. And then we failed to meet them. Political leaders were long on promises, but low on investment. Essentially, the country told future generations that it wasn’t interested in doing anything to help rescue them from living in an increasingly sweltering world.

No longer. This government budget includes 2.5 billion shekels for renewable energy projects at the Ministry of Energy; the Ministry of Environment will have NIS 600 million more to work on climate mitigation and adaptation projects; a carbon tax has been passed and will soon be implemented. The new government set an overall reduction goal of 85% in greenhouse emissions by 2050 relative to 2015. The associated interim targets are still too modest. But for the first time, the state of Israel has real skin in the game of global efforts to provide some semblance of climatic stability for the future.

This budget and the associated Arrangement Laws bring several other critical changes: The monopoly of ultra-Orthodox kashrut licensing will be ended, with competition promising to reduce the cost and corruption associated with the present kashrut system. New incentives to bring the structurally unemployed into the workplace will be adopted so that no one will be incentivized to opt out of the labor market.

It’s not that conflicts did not emerge within our motley coalition during budget negotiations. But how they were resolved says a great deal about this government’s ability to seek common ground and to get things done, once the debate over the “Land of Israel” stops dominating the agenda.

Israelis are living longer. Women on average reach age 85. But we remain with a crazy retirement age of 62 –, a policy that was based on entirely different actuarial realities. The proposed reform called for an increase to age 65. When leftist parties argued that this was unfair to poor, working women – the Finance Ministry bureaucrats listened and actually agreed. A special compensation package was designed to expedite the transition.

The same spirit of conciliation enabled the initiation of an agricultural reform that will allow for significantly more food imports — and presumably lower prices at Israel’s extremely expensive supermarkets. But it also ensured that Israeli farmers would receive the assistance they need to weather the new economic reality and remain in business.

Finally, an acrimonious battle over the establishment of a new “Regulatory Authority”, which is to review the efficiency of government regulations was resolved: On the one hand, the treasury will now scrutinize major new requirements imposed on the country to see if they are onerous or wasteful. But the analysis and recommendations will only constitute an advisory position. Economics is not the only thing that matters. Based on the new system, truly ill-advised government interventions, presumably, can be averted.

When crops are planted again and again, and the land has no time to rest, soil structure deteriorates; nutrient levels drop; soil-borne pests thrive. The extraordinary wisdom of the ancient agricultural edict is that when we give the earth a rest – it can grow healthier. Societies also wear down. I believe that as we take a break from the endless obsession to focus on our differences, this year Israel will also grow healthier.

It is refreshing to see political leaders from opposing camps choose to stop demonizing each other as they argue civilly and listen to each other. Israelis who have been told that the “right” or the “left” is the enemy, might actually come to appreciate their ideological rivals — maybe even learn from them. I know that hardly a day goes by when I am not impressed with the quality, intelligence and integrity of Knesset members who come from the “other side”– politicians who not long ago I either dismissed or assumed to dislike.

And yes – this “experiment” of including an Arab party in the ruling coalition seems to be working. That’s very good news.

So, during this year of shemitah, perhaps we can all just give it a rest. Enjoy the break from toxic attacks by government ministers on our most cherished institutions of democracy – like the Supreme Court, the Attorney General or the police. Enjoy the rudiments of harmony that emerge from the cabinet. Perhaps we can all reflect back a bit of this new positive energy towards those Israelis who may not share all of our ideas or preferences but who surely want Israel to be a better place to live. After a sabbatical year of rest, the land of Israel is healthier. Israeli society will be as well. And we will be better able then to address those challenges we briefly set aside.