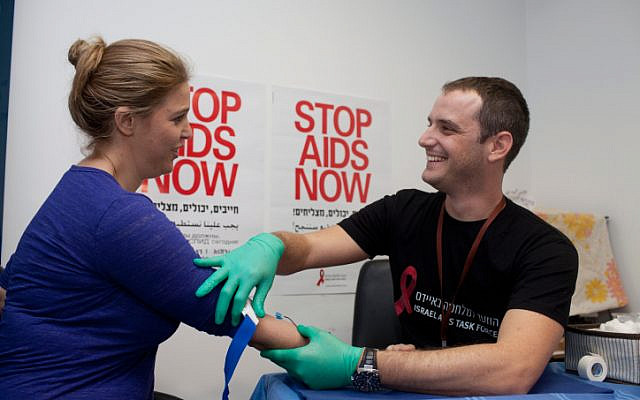 Illustrative: Former Israeli MK Adi Kol does an HIV test in the Israeli parliament, as part of a blood drive to identify those who had contracted HIV/AIDS, performed by the Israel Aids Task Force on November 25, 2013. (Flash90/File)

This week on the way to work, I was listening to an interview with Hoosier Mayor Pete Buttigieg (pronounced Buddha-judge) and this man who is running for US president was talking frankly about his relatively late-in-life coming-out story. As the mother of a gay son, I was marveling at how things have changed for the queer community in just a few short years, let alone the five decades since the Stonewall Uprising that helped mainstream the gay movement.

It means I can dream that my oldest son will one day find his Mr. Right, and hopefully, like his five siblings, have the chance to raise a family here in Israel, as many in the gay community are doing already.

My son, who is not yet 16, was born into an era in which he feels really comfortable being loud and proud. That doesn’t always mean that his environment feels the same, of course. After some unpleasantness last year in our local high school in our mixed religious-secular settlement, this year he’s at a boarding school in Jerusalem where we visited him on Shabbat. He greeted us wearing a full-body purple unicorn suit, complete with tail. I think he’s doing fine.

But it is still in my nature to worry. When we’re out and about, the kids like me to play the “fun” game, One Step From Death. My superpower is that, in almost any situation, I can see impending doom. Yes, any situation.

When I was growing up, AIDS was basically a death sentence for many in the gay community and several of my parents’ friends were struck down. A dark cloud hung over their community of classical musicians. But today, that is much less the case.

I asked my son today what World AIDS Day, marked annually on December 1, means to him and he said honestly that he’s not actually sure. He said, “On the one hand, I do know about the AIDS epidemic and how devastating it was.” But on the other hand, “it was a long time ago and relates to me a lot less than it would if I were even five years older.”

However, as we all know, HIV doesn’t discriminate based on sexuality, or age — or really anything.

World AIDS Day was launched more than 30 years ago. Since the illness has been tracked, it’s estimated that close to 40 million people worldwide have died of AIDS-related illnesses, and today, almost that many are living with the disease. Increasingly, infected individuals are surviving and, with proper treatment, AIDS is no longer a death sentence.

Last year, World AIDS Day was held under the banner of “Know your status.” So for me, the mother of a healthy, curious gay boy, I want to promote that drive and ask everyone – gay, straight, whatever – to get tested for HIV to find out your status.

This year, the theme is “Communities make the difference.” I know that sometimes the Jewish community likes to shy away from tough topics, but as we all have heard so many times, anyone who saves a life, saves a whole world.

In this case, frank, open conversations can actually be lifesaving. So we’ll talk about AIDS when our son comes home for Shabbat this weekend. I imagine he’ll roll his eyes, soak up our concerns, and take the topic back to his boarding school when he returns on Sunday.

I hope, having read this, you will find time to discuss AIDS prevention in your communities, too.