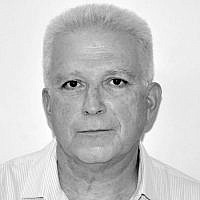 The Blogs
Michael Humphries
Apply for a Blog
Please note that the posts on The Blogs are contributed by third parties. The opinions, facts and any media content in them are presented solely by the authors, and neither The Times of Israel nor its partners assume any responsibility for them. Please contact us in case of abuse. In case of abuse,
Report this post. COVID-19 pandemic ramifications are impacting virtually every facet of our lives. How we work, who we can interact with and, yes, even how we eat.

According to Feeding America, food insecurity “describes a household’s inability to provide enough food for every person to live an active, healthy life.” The organization reveals that one out of nine Americans suffers from this. Now with the coronavirus pandemic, the nonprofit is projecting that another 17 million Americans will be food insecure.

This phenomenon, of course, is even more widespread in developing countries where food insecurity is a result of both poverty and malnourishment.

Yes, progress is being made: according to the World Bank’s 2018 report, “Piecing Together the Poverty Puzzle,” in 1990, one-third of the world’s population lived in “extreme poverty,” meaning they got by with a paltry $1.90 a day or less. As of 2015, that number decreased to 10 percent — the lowest percentage in recorded history. However, that figure still translates to some 736 million people. Our work, then, is far from done.

Here’s where the Start-up Nation can help and provide a solution that could get to the root of the problem. After all, Israel has nearly perfected a model that allows food to be easily distributed and grown sustainably.

Largely due to the smaller size of the country, most moshavim are a mere 30 dunam or 7.5 acres of land per family, plus roads and public spaces. But that small land area packs quite a punch: the homes are organized in a village structure of 40 to 300 families making it easier and more economical to provide education and other social services to those families.  Moshavs are then organized into clusters, which allows for the provision of services that require a larger population to be economically delivered.

While this model may not fit all farming needs, the concentration of farmers in a village format is the basis for a farming system that is self-sustaining and supportive of its surrounding urban centers. It allows for collective purchases of inputs and sales of produce. This method provides an economic provision of social services such as education and medical care, as well as social interaction. It also enables the development within the community of skills other than farming — and unlike the stricter socialism of the kibbutz — the accumulation of personal assets that can then be passed on to the next generation as well.

This method is certainly worth considering on World Food Day, on October 16, which also coincides with the anniversary of the establishment of the UN’s Food and Agricultural Organization (FAO), whose goal is to eliminate hunger worldwide. Sadly, 75 years after its founding, food scarcity is still a very real global problem.

Each year, the FAO selects a theme for its birthday, all of which center on the concept of food security. At the root of most food security issues is poverty. So intertwined are the two subjects that they beget a chicken and the egg question: Does poverty lead to food insecurity or does food insecurity lead to poverty?

Looking for a single, definitive answer by reviewing the academic and professional literature would leave one confused since experts in both areas are divided on the issue. Clearly, those who are routinely hungry are not getting enough nutrients and, thus, are not able to work and provide for themselves. At the same time, those who are poor are not likely to achieve food self-sufficiency on their own.

The answer, of course, is that both views are correct.

To date, the popular approach of more affluent countries to transfer some of its agricultural surpluses to poorer developing ones is not sufficient. While transferring the surpluses removes them from the western markets, supports farmers in those countries and allows the West to feel good about supporting the poor elsewhere, this solution only scratches at the surface of the problem — it provides someone with a fish, rather than their own rod.

It is here that management of the farm system and Israel’s successful moshav model of land distribution comes into play. That is, farmland in developing countries needs to be distributed in a way that encourages some agglomeration or concentration of farmers into a community that allows for economical distribution of social assets, such as education and medical care, while allowing individual farmers to accumulate personal wealth that will then contribute to their food security.  This in turn will allow them to supply their surrounding communities with food produced at a reasonable price relative to their income. This would then generate the income necessary to pull these areas out of poverty.

This is not a play for advocating for libertarian economics: there is a role here for governments to support individual efforts to lift themselves out of poverty.  However, for the wealthier West to simply throw money at the poorer East does not solve the underlying problem.

Of course, the moshav model as practiced in Israel may need to be modified in order to be applied elsewhere, but it is a model worth considering in tandem with a top-down approach that prevails in most international institutions dealing with food security. The moshav model provides participants with the skills and infrastructure to be self-supporting and self-sustaining.

Sadly, Israel has a food security problem of its own; the National Nutrition Security Council has called for more than doubling the number of Israelis that receive government food assistance from the current 11,000 to some 25,000 recipients. But here the problem begins with poverty and not with malnourishment, which plagues much of the developing world.

That said, the moshav model can still be a viable way to provide the poor with much-needed fishing rods to generate a self-sustaining way of life that will make them food independent and secure.

Michael Humphries teaches marketing and management at the Jerusalem College of Technology and is deputy chairman of the Business Administration Department at Touro College Israel, where he teaches finance.