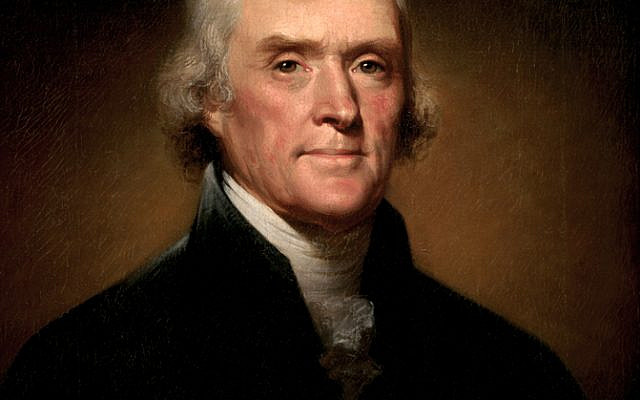 April 13 marks the anniversary of Thomas Jefferson’s birth in 1743. We Jews should acknowledge a central aspect of Jefferson’s contributions to the United States, that of our religious liberty.

Proudly we remember, especially on patriotic occasions, Article VI, Section 3 of the Constitution. We focus on the part that proclaims, “but no religious test shall ever be required as a qualification to any office or public trust under the United States.”  We note that England did not allow Jews to sit in Parliament until passage of the Jews Relief Act of 1858. (Benjamin Disraeli, elected in 1837, had converted to Anglicanism in his pre-teens.)

Little do most people realize that James Madison, author of the Constitution, derived this provision against religious tests, though ahead of its time, from a law Thomas Jefferson had written ten years earlier. The Virginia Statute for Religious Freedom, which the Legislature eventually passed in 1786, gave Jews, along with everyone else, the right to worship as they pleased.  It stated categorically that faith, or lack of it, lay beyond the purview of government..

The bill went on to say, “proscribing any citizen as unworthy the public confidence by laying upon him an incapacity of being called to offices of trust and emolument, unless he profess or renounce this or that religious opinion, is depriving him injuriously of those privileges and advantages to which, in common with his fellow citizens, he has a natural right . . . . ”

Jefferson was so proud of his accomplishment that his epitaph listed the Statute as one of three contributions to the Nation. (the others: the Declaration of Independence and the University of Virginia.)

Placed in the context of his era, Jefferson’s actions deserve special commendation. The Puritans of Massachusetts and the Catholics of Maryland fled their home country to save themselves from religious persecution. However, the same dissidents believed in tolerance only for themselves. They oppressed other sects. Roger Williams, the founder of Rhode Island, left Massachusetts on account of persecution at the hands of the Puritans. It took Maryland until 1826 for the legislature to allow Jewish believers to hold office. Agnostics and atheists gained that right as a result of a United States Supreme Court case in 1961.

Jefferson personally held philo-Semitic views. In a letter to Mordecai Manuel Noah in 1818, about a decade after he left the White House, Jefferson acknowledged the persecution of Jews and said that all people have a right to their own beliefs without hindrance from anyone else. https://founders.archives.gov/documents/Jefferson/03-13-02-0060

Every schoolchild learns about George Washington’s letter to the Jewish community of Newport, Rhode Island. However, not only did Jefferson write his own letter, he enacted a landmark law. We can criticize Jefferson for his failures, we must commend him for creating in the United States true freedom of conscience for Jews and the outcasts of Europe.