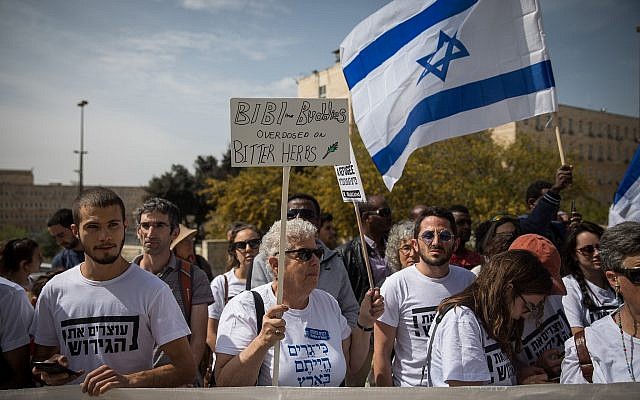 African asylum seekers and Israeli activists protest outside the Prime Minister's Office in Jerusalem, against their deportation, on April 3, 2018. (Hadas Parush/Flash90)

On the eve of Israel’s 70th anniversary, human rights in the country are under systematic attack from within. Nothing threatens Israel today more profoundly than this unbridled assault on its democratic foundations and its Jewish traditions.

There has always been a built-in tension between those in power and advocates of individual and collective rights. It is precisely for this reason that basic human and civil rights have been granted special protection in democratic countries – and, since the end of World War Two – in international conventions. These fundamental norms were consciously ensconced in Israel’s Declaration of Independence and over the years elaborated in a series of legal instruments, practices and judicial rulings. The Basic Law on Human Dignity and Liberty (1992) endowed these principles with constitutional weight and has since provided an essential shield against official abuse for citizens and minorities alike. A variety of human rights organizations, dating back to the founding of the Association for Civil Rights in Israel in 1972, continue to champion these precepts.

Relations between these groups and successive Israeli governments, regardless of political persuasion, have inevitably been strained. Over the years, the challenges they mounted to overt and latent prejudice and injustice have created immense friction. Yitzhak Rabin belittled their efforts; Ehud Barak evinced little patience for their activities; Ariel Sharon and Ehud Olmert consciously tried to undermine their initiatives; all, at one time or another, locked swords with the High Court of Justice, charged with upholding these values. But no Israeli leader has sought to undermine Israel’s evolving human rights code more ruthlessly than its current prime minister, Benjamin Netanyahu.

Netanyahu and his fellow travelers differ from their predecessors in two major respects. First, they have unabashedly politicized the human rights debate in the country, equating it with their opposition on the left and thus stripping it of its common civic wrapping. Second, they have pitted human rights against patriotism, thus not only delegitimizing human rights activism, but also branding its proponents as traitors bent on the destruction of the state.

This process began shortly after Netanyahu’s return to the Prime Minister’s office in 2009 with the direct and indirect hounding of human rights advocates. It has continued since with a series of stabs at civil rights organizations and their defenders and the cultivation of a studiously illiberal discourse. And it has peaked in recent weeks with vicious attacks on specific organizations (B’Tselem, Breaking the Silence, Adalah) and the New Israel Fund, the foundation that has backed their work – along with that of hundreds of Israeli social justice, religious pluralism, minority rights and disadvantaged groups in the country. (Full disclosure: I served as president of the New Israel Fund between 2008 and 2012 and continue to sit on its International Board of Directors).

The latest blitz on Israel’s human rights community revolved around widespread resistance to the government’s plan to deport Eritrean and Sudanese asylum-seekers to third countries in Africa against their will – a surge of popular protest that extends well beyond traditional opposition circles. When Netanyahu backtracked on a compromise in cooperation with the United Nations High Commission for Refugees, under immense pressure from his coalition partners, he lashed out in typical fashion against the New Israel Fund, accusing it of being directly responsible (along with the European Union) for scuttling the original agreement he had struck with Rwanda. Although this charge is an outright canard that has no basis in fact (and was summarily dismissed by the Rwandan government), it opened the door for publically pillorying human rights activists, hounding their organizations, inciting against their backers, denouncing the disloyalty of their actions and initiating steps to constrain dissent (encouraging a parliamentary commission of inquiry, bypassing judicial rulings, cementing executive power).

Reasons for the present bombardment abound. These relate in part to a desire to play to the government’s hard-right constituency (with the prodding of key ministers Naftali Bennett, Ayelet Shaked, Avigdor Liberman, and even Moshe Kahlon). They also reflect Netanyahu’s growing dependence on these coalition partners, with whom he is vying for the support of their common electoral base. The fragility of the Prime Minister’s hold on power in light of the ongoing investigations into his conduct in office provides additional explanations, perhaps along with his rising fear that his days in office are numbered (nationalist scapegoating creates a strong diversion indeed). But at root this offensive against human rights is a function of his complete misunderstanding of the nature of democratic government and of the Jewish roots of the State of Israel.

Benjamin Netanyahu has never really been able to distinguish between criticism of his government’s policies and fidelity to the state (just as he sees little daylight between his own continuation in office and support for Israel’s interests). What he consistently fails to grasp is that democratic governments are the product of the pluralism inherent in freedom of thought, speech, association and action: they are the result of an agreement to disagree and the establishment of rules of the game to govern the way disputes over content and direction are played out. When no other point of view is valid, when no other body (such as the judiciary, the legislature or the press) may challenge executive decisions, and when popular criticism is seen as akin to heresy, then democratic practice is reduced to personalized electoral competition and, ultimately, to the tyranny of the majority.

Debates over policies – often vehement and always heartfelt – have been the order of the day in Israel since its inception. Israelis today differ on how to handle the situation in Gaza, the refugee conundrum and even the upcoming Independence Day ceremony. But such arguments, however passionate, have emerged from a common moral base – a belief in equality, justice and human liberty. These guiding values of the democratic ethos are the foundation stones on which Israel has flourished; silencing and exorcizing them cannot but imperil its democracy.

If possible, however, the present assault on human rights in Israel goes much farther than eroding the country’s democratic underpinnings: it seeks to redefine its Jewish character. For many years, the dominant interpretation of Israel as a Jewish state rested on the content of its values. In this substantive approach, what makes Israel Jewish are the normative guidelines it derives from its heritage, especially from the principles of respect for human life and human dignity embedded in its sources (“Do not do to your friend what is anathema to you”), and so skillfully woven into its founding vision. The best measure of Israel’s Jewish character therefore depends on how it comports itself – on what it does and the extent to which its actions and accomplishments meet the demands of the moral compass ingrained in this legacy. From this vantage point, the true measure of the Jewishness of the state lies in the extent to which it values human life and strives to develop and sustain a just society.

For several decades, and with renewed intensity during the past eight years, key groups in Israel have promoted a very different, demographically-based and ethnically-driven, notion of the Jewish state. These efforts culminated in 2015 with the establishment of the most right-wing government in its history, one which correlates the country’s “Jewishness” with exclusive Jewish control over both the state and the land. This perception underlies the settlement enterprise, creeping annexation, attitudes towards the resolution of the conflict, policies towards the Arab community in Israel, as well as moves on specific issues such as immigration (including the determination to expel the less than 40,000 African refugees who hardly pose any serious demographic threat) or the crisis in Gaza. For the ultra-nationalists who now hold the reins of government, the Jewish state is one where Jews dominate; ethnocentric power is the measure of sovereignty.

This definition of Israel, parlayed by Benjamin Netanyahu and his coalition, contains demographic contradictions that have pressed the government to promote blatantly anti-democratic measures. It also does not resonate with many citizens of the country and with most Jews throughout the world. For them, attacking Israel’s human rights groups is akin to denying both its Jewish and democratic components.

Guaranteeing the human rights of all Israelis and adherence to the non-violent norms they entail is not a luxury, it is fundamental to Israel’s being. Before events spin out of control, it is still possible to step back, reaffirm these notions as embracing broad societal principles and design ways to ensure their implementation. This will be the best gift to the country on its 70th birthday, for the glory of the State of Israel.