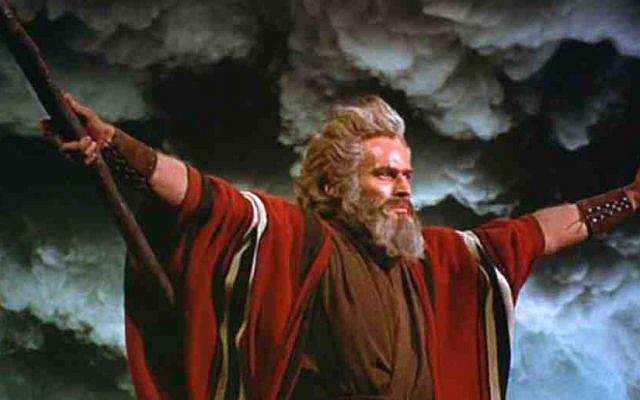 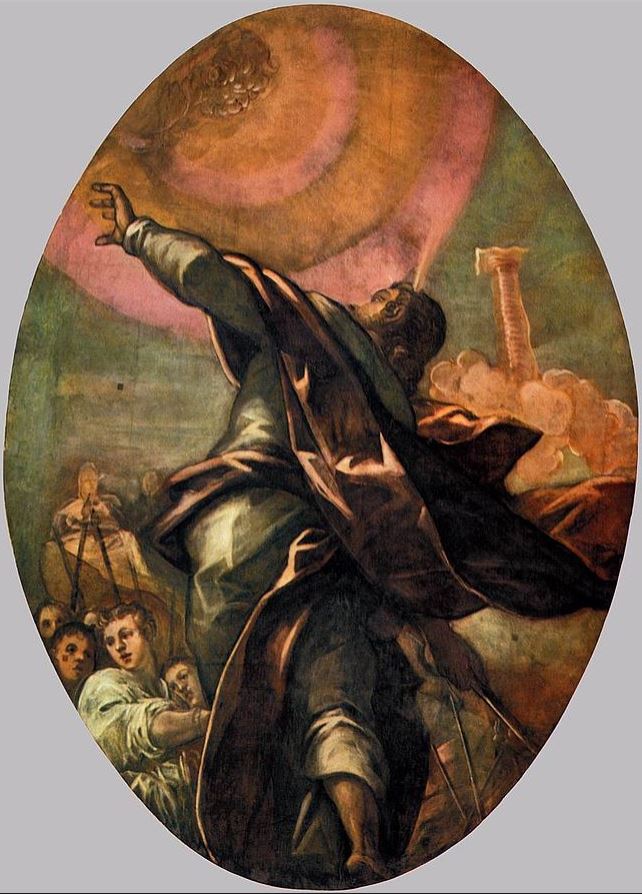 Parshat Beshalach says in Exodus 13:21, “And the LORD went before them by day in a pillar of cloud, to lead them the way; and by night in a pillar of fire.”

Exodus 16:10 continues, “And it came to pass, as Aaron spoke unto the whole congregation of the children of Israel, that they looked toward the wilderness, and, behold, the glory of the LORD appeared in the cloud.”

What was it that the children of Israel saw in the cloud? Why did HaShem appear in a burning bush, a pillar of fire, or a pillar of cloud? Both fire and clouds have undetermined shapes. Did the cloud in which the glory of HaShem appeared have the appearance of an actual cloud like we usually see in the sky or was it something with no definite shape that simply reminded ancient Israelis of the ever-changing shapes of clouds?

Was the “glory of the LORD” something physical that projected light onto the retinas of their eyes or were they granted “special” vision to perceive something that was outside the very small percentage of the electromagnetic spectrum that is visible? In 2 Kings 6:17, Elisha prayed that HaShem would open his servant’s eyes so he could see the horses and chariots of fire round about them. Why couldn’t Elisha’s servant already see the chariots of fire if they were already there? Were they hidden in some unseen dimension?

Surprisingly, physicists are slowly figuring out how to scientifically test many of the oldest questions of mankind. As is usually the case, last century’s science fiction is this century’s science. Superstrings, M-theory, other universes, infinite space-time, and additional dimensions are all popular areas of scientific research in modern physics. Much of this research grew out of Albert Einstein’s general relativity. But before there was Einstein, there was Georg Bernhard Riemann.

Riemann’s essay, “On the Hypotheses Which Lie at the Foundation of Geometry,” introduced the mathematics of additional space dimensions on June 10, 1854 before the faculty of the University of Göttingen. Albert Einstein went on to think of time as an additional space-time dimension. It is questionable whether Einstein could have ever developed special relativity without Riemann’s contribution.

In the decades following Riemann’s seminal work, popular culture brought forth all kinds of ways of thinking about additional space dimensions. The fourth dimension influenced the work of Fyodor Dostoyevsky, H.G. Wells, and Oscar Wilde. Lewis Carroll, a mathematician whose real name was Charles L. Dodgson, even incorporated the idea of a mathematical gateway to another dimension into his writing about Alice in Wonderland for children.

Linda Dalrymple Henderson said it like this, “The fourth dimension had become almost a household word by 1910…. Ranging from an ideal Platonic or Kantian reality – or even Heaven – the answer to all of the problems puzzling contemporary science, the fourth dimension could be all things to all people.”

Thirty years after Reimann’s essay, Edwin Abbot wrote his fictional Flatland: A Romance of Many Dimensions by a Square. Abbot’s Flatland is inhabited by flat geometric shapes like lines, squares, polygons, and circles. Since Flatland is totally flat and inhabited by two-dimensional shapes, the third dimension is totally imperceptible to them.

In order to illustrate this point, consider a sphere being lowered through a two-dimensional plane. Any Flatlanders witnessing the descent would initially perceive the sphere as a point that became a circle. The circle would grow increasingly in size and then similarly decrease in size until it became a point again and disappeared. 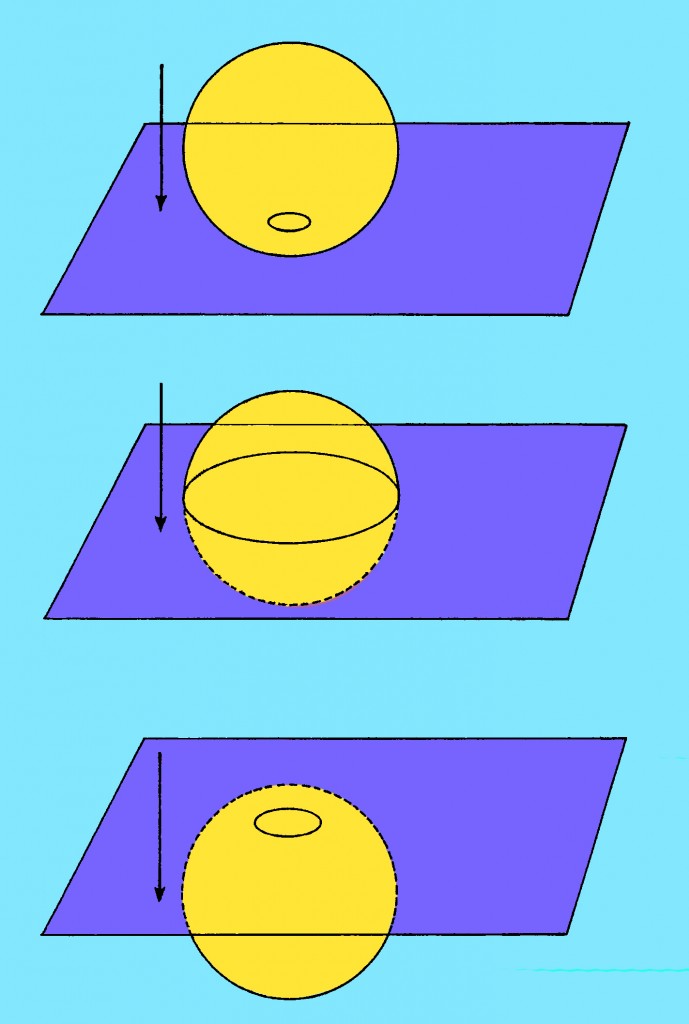 A three-dimensional sphere descending through a two-dimensional plane could be perceived only in two-dimensional circular slices that increased and then decreased in size (Revision by Yoeli Kaufman of an Illustration by Robert O’Keefe in Michio Kaku’s book, Hyperspace) 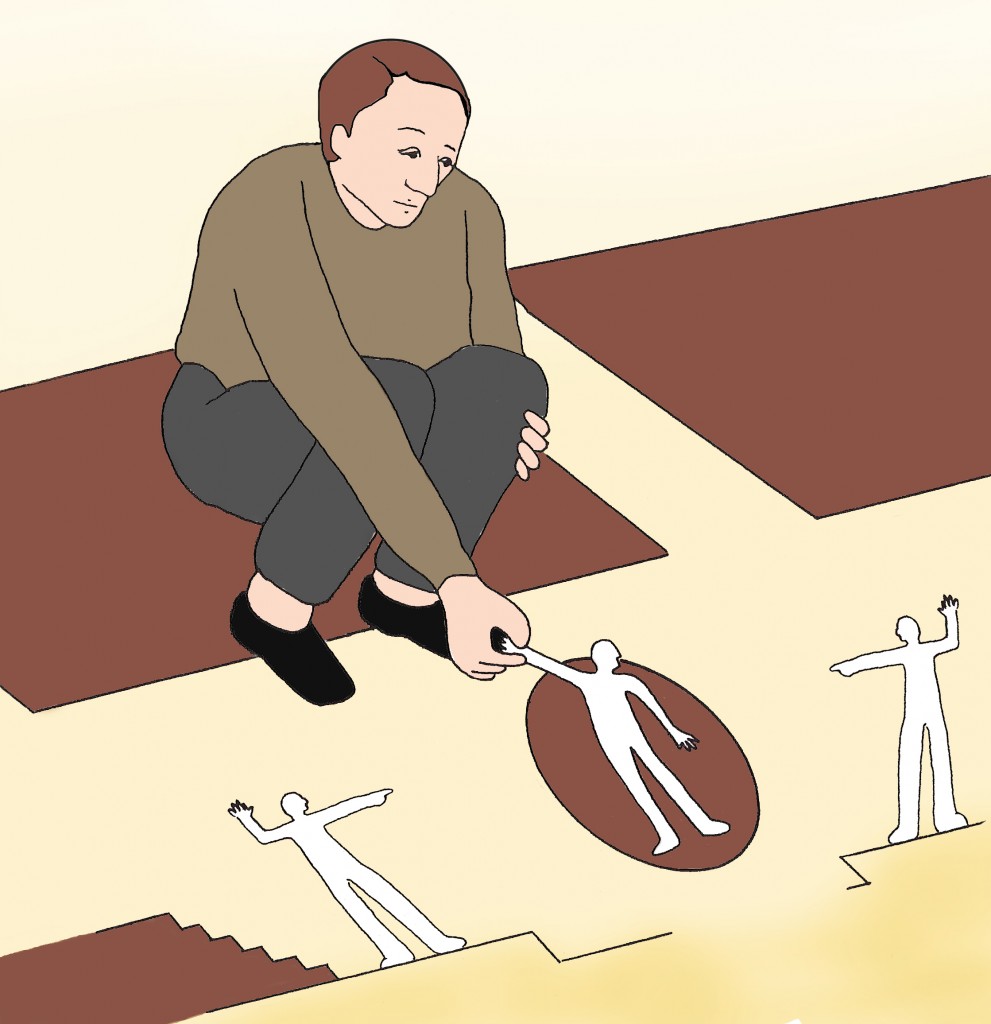 Flatlander disappearing from two-dimensional space (Revision by Yoeli Kaufman of an Illustration by Robert O’Keefe in Michio Kaku’s book, Hyperspace)

If a three-dimensional being descended through a two-dimensional plane, a Flatlander would perceive two strange geometric figures (shoes) that changed into two circle-like shapes (legs) that grew in size until they became two smaller circles (arms) accompanied by a larger circle (torso) that grew smaller (neck) and then larger (head) before disappearing at a point at the crown of the head.

It doesn’t take much of an imagination to extrapolate the experiences of Mr. Square to our Torah discussion. If a four-dimensional or even an infinite-dimensional “supernatural” Being, let’s say, wanted to reveal His “glory” to the children of Israel, they would have been able to perceive only three-dimensional sections that would have changed in size and shape as the Being passed in and out of their three dimensions.

Science attempts to study what is real. Either God is a myth or He is more real than anything we know in our three dimensions of space. It is inevitable as science becomes more and more influential in our worldviews that we incorporate scientific concepts into our ever-evolving attempts to understand the divine.

I do propose that if our species survives for another ten thousand years, our primitive notions about reality will be considered little more that scratches on the walls of a twenty-first century cave. None of us will make any progress if we continue sitting in our cave doing nothing more than bemoaning the darkness. Not satisfied with sitting in the darkness, I am only “feeling my way” in a weak attempt to find a doorway or opening that might lead to light.