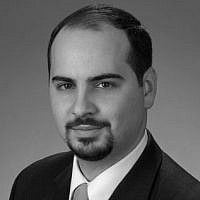 The Blogs
Ari Morgenstern
Apply for a Blog
Please note that the posts on The Blogs are contributed by third parties. The opinions, facts and any media content in them are presented solely by the authors, and neither The Times of Israel nor its partners assume any responsibility for them. Please contact us in case of abuse. In case of abuse,
Report this post.

There are only two approaches to any global crisis: form a committee to talk about doing something or find a way for the president of the United States to take decisive action. Thankfully, from his withdrawal last year from the faulty Iran Deal to the imposition of the most powerful sanctions ever imposed against the Iranian regime, President Trump is leading the charge to change Iran’s malign behavior. His sanctions have devastated Iran’s economy. Next week, the Financial Action Task Force (FATF) can put another nail in the regime’s coffin by cutting Iranian banks off from the rest of the world.

The FATF, an intergovernmental body charged with “combating money laundering, terrorist financing and other related threats,” isn’t often headline grabbing but it holds enormous power. Next week, it will meet in Orlando and decide whether the three years Iran has ignored the FATF’s calls for Iran to shape up its banking laws is long enough. The FATF can blacklist Iran for its terror financing, among other things, and make it as difficult to do business with Iran as it is to do business with North Korea.

A blacklisting would be a harsh and deserved punishment for contaminating global banking with years of money laundering schemes and terror financing. It would force Iran to reckon with the consequences of its taste for chaos wherever the opportunity presents itself. The case for doing so is strong.

Iran agreed to, but then ignored, a June 2016 Action Plan devised by the FATF to address money laundering and terror financing associated with Iran’s financial sector. That plan was supposed to be fully implemented by January 2018, but no measurable progress had been made. Still, the FATF held back and gave Iran more time to reform itself.

Later that year, in October, the FATF warned Iran that if the Islamic Republic did not implement all elements of the plan, including “adequately criminalizing terrorist financing,” the regime’s banks would be effectively blacklisted by the group. But nearly six months later, in February 2019, the FATF balked. It found Iran in noncompliance and once again threatened appropriate consequences if Tehran did not resolve the world’s concerns by June of this year.

The FATF cannot bluff. It is destroying its credibility. Recognizing Iran’s illicit financial activities, threatening consequences and then failing to act when Iran flouts the international community cannot stand. And lest they’ve forgotten, there is a real human consequence to the FATF’s fecklessness.

According to a report from the Foundation for Defense of Democracies, Iran spends $16 billion annually to support terrorists and rogue regimes. Moving money from Tehran’s coffers to terrorist organizations like Hamas and Hezbollah is the fundamental way in which Iran wreaks havoc and instability wherever and whenever possible. In fact, this month, Hamas celebrated the twelfth anniversary of their takeover of the Gaza Strip – a takeover that could never have occurred without Iran’s backing.

Blacklisting Iran would have immediate and positive reverberations throughout the Middle East and the world. It would dramatically inhibit Tehran’s ability to move money to Hezbollah, limiting that terrorist organization’s ability to continue stockpiling weapons and threatening innocent people in the region. Likewise for Hamas, Palestinian Islamic Jihad, Houthi rebels in Yemen, and the vicious regime of Bashar al-Assad in Damascus.

This is not an academic discussion. Every dollar Tehran is allowed to deliver to its murderous proxies costs innocent people their lives. If the FATF’s distinguished leaders continue to cower before Tehran’s tyrants, even more innocent blood will be on their hands.

Ari Morgenstern is the Senior Director for Policy and Communications at Christians United for Israel.

About the Author
Ari Morgenstern is the Senior Director for Policy and Communications for Christians United for Israel.
Related Topics
Related Posts
Comments
Advertisement