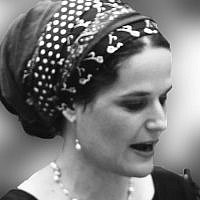 The Blogs
Michal Tikochinsky
Apply for a Blog
Please note that the posts on The Blogs are contributed by third parties. The opinions, facts and any media content in them are presented solely by the authors, and neither The Times of Israel nor its partners assume any responsibility for them. Please contact us in case of abuse. In case of abuse,
Report this post.

The arrest of an American rabbi on suspicion of filming women in various stages of undress at a ritual bath has raised calls to banish men from this unique women’s space. While routine immersions of women in a mikveh for purposes of ritual purity are overseen by women, when a woman immerses as part of her conversion, the ratification of a Beit Din (religious court) is necessary. While I am not an expert on how such procedures are conducted in the United States, I do know how they are conducted in Israel, and it is high time for a change.

As described on the ITIM website, when a woman immerses as part of a conversion ceremony, she immerses once in the regular manner, observed by a woman. She then comes out of the water, puts on a long, dark, wide robe that allows water to permeate but still ensures that she is modestly dressed, and re-enters the water. Three male religious court judges (dayanim), who constitute a Beit Din for the purposes of immersion, then enter the room and ask her questions about Judaism while she stands in the water. After she has answered their questions, these men, who are usually not the same rabbis who served on the religious court that tested her for the purpose of conversion, ask her to recite the first line of Shema Yisrael and to repeat the acceptance of the yoke of mitzvot that she recited in the presence of the conversion court. They then watch as she immerses a second time, after which they announce her new Hebrew name and welcome her to the Jewish people.

The precise way in which the Beit Din observes the immersion varies in accordance with the degree of sensitivity of its members. One rabbi has told me that the members of his Beit Din stand at the entrance of the mikveh room and the female mikveh attendant stands between them and the conversion candidate. However, according to the female administrator of a large conversion program, the male judges are generally in the chamber itself and most female converts find the experience traumatic. Similarly, female converts who serve as conversion mentors for other women report that the rabbis generally stand at the edge of the pool, directly above the woman, who must respond to their questions and recite the necessary pronouncements while the wet robe clings to her body. As these women describe it, the situation is both uncomfortable and embarrassing.

The idea of a woman immersing in a mikveh before men, even if she is covered from head to toe, is disturbing. A woman in this situation technically may not be stripped of her clothes, but she is stripped of her dignity. The requirement that men enter the mikveh chamber to witness the immersion of a female convert is by definition immodest conduct. How paradoxical it is that a woman is required to go through this immodest ritual in order to live as a faithful and modest Jewish woman!

In order to address this issue, in 2007, I published an article entitled “A Woman Oversees the Immersion of a Woman” in the Akdamot Journal of Jewish Thought, a publication of Beit Morasha of Jerusalem, where I head the Moshe Green Beit Midrash for Women’s Leadership. The article analyzes the practice of having male judges present at the ritual immersion of female converts, weighs the necessity of having a Beit Din witness the immersion in the first place, and offers several halakhic alternatives to the practice as it is conducted in Israel today.

After analyzing relevant halakhic sources, the article concludes that there is room to institute a practice in which trustworthy, female emissaries of the Beit Din, who are specially appointed for this purpose, would supervise the immersions of female converts while the members of the religious court stand outside. These women would serve as the “extended arm” of the judges and would ensure that the immersion fulfills the requirements of Jewish law. Having women represent the court would obviate the need to rely on robes that are usually only considered permissible after the fact, and would avoid the embarrassment — both for the women and for the Beit Din — of having men enter a women’s bathhouse and watch women immerse. As demonstrated in the article, there is a sound basis in Jewish law for this, based on positions that assert that supervision by women could be “as if they [the rabbis] were standing there.”

The article argues that at the very least, women attendants should form a physical barrier between the immersing convert and the members of the Beit Din, so that the judges observe the immersion from afar. An alternative solution would be to erect a semi-transparent screen, which would give the robed female convert a sense of privacy while permitting the judges to see a blurred image of the immersion. Creative solutions such as these would not require any radical changes in Jewish law, merely a higher level of attention and sensitivity.

The publication of my article was a significant breakthrough. It gave voice to the needs of female converts who were afraid to air their grievances lest such challenges adversely affect the Beit Din’s decision in their cases. In the seven years since its publication, I have received many responses, including letters of support from rabbinical court judges and members of Knesset. The issues raised have been discussed in internal forums of several rabbinical conversion courts and in a number of conferences at which rabbinical court judges discussed the article and the options for change. However, despite the fact that a viable halakhic alternative exists, the practice of male judges overseeing the immersions of female converts has continued.

To read an English translation of “A Woman Oversees the Immersion of a Woman,” which has been published by Beit Morasha together with a recent responsum (teshuva) by Rabbanit Dr. Michal Tikochinsky on the basis for the view that permits women to serve as representatives or emissaries of the Beit Din, click here. To read the full article in Hebrew click here.

The author wishes to express her thanks to Shira Pasternak Be’eri for her assistance in the preparation of this article.

About the Author
Rabbanit Dr. Michal Tikochinsky is Director of Beit Morasha’s Moshe Green Beit Midrash for Women's Leadership, and the Women’s Halakha Program, which offers senior women Torah scholars the opportunity to study and take examinations that are parallel to the requirements for male rabbinical candidates in Israel. Rabbanit Tikochinsky was born in Israel and resides with her husband and seven children in Nof Ayalon.
Related Topics
Related Posts
Comments