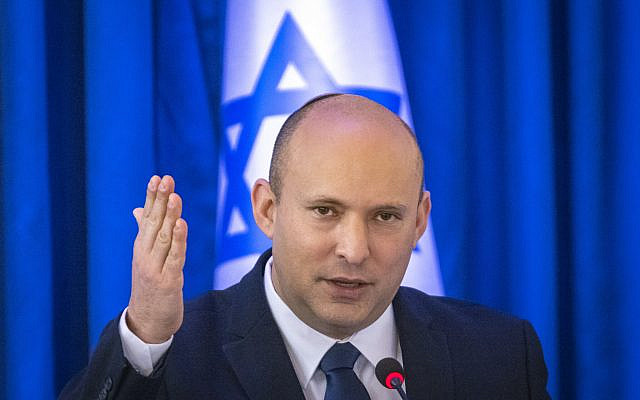 Israeli Prime Minister Naftali Bennett. His vision to bring half a million new olim to Israel needs to be met with pragmatism and a better quid pro quote. (Olivier Fitoussi/Flash90)

A few days ago, I wrote an article on my personal blog about Aliyah Day  —  Israel’s annual “celebration” of aliyah.

As I opined there, Israel’s current approach to aliyah is dishonest.

It reports, with great fanfare, on its successes -— namely how many new immigrants arrived every year.

Meanwhile, it shrouds in mystery, or at least bureaucratic confusion, the number of immigrants who leave the country. That latter number is believed to be very high, and this is a longstanding trend. Without being able to weigh the increase in aliyah against yeridah we’re unable to derive useful information about net gains and what trends in that respect are looking like.

If Israel’s current approach to aliyah can be compared to a business, it couuld be likened to one that reports only on its annual sales without mentioning anything about its operating expenses (or thus, its profit margins). The picture can only ever look various shades of good. This is problematic.

After learning that aliyah to Israel is apparently up year-on-year, Prime Minister Naftali Bennett seized upon the opportunity to unveil what have been called “ambitious” new plans to recruit half a million new immigrants (olim hadashim) from the “West” by 2031 (as another commentator pointed out, by focusing solely on the “West” the Prime Minister indirectly snubbed potential olim from other parts of the world.)

Bennett’s attitude, in my opinion, represents one of unbridled entitlement. It looks potentially like the latest manifestation of a well-worn and tragic saying among English-speaking immigrants to Israel: “Israelis love aliyah. They don’t love olim.”

If Israel wants to attract a large cohort of highly-educated potential immigrants from the West, it needs to be prepared to offer a quid pro quo and to seriously up its game in retention — because many are currently reaching for the door and leaving.

That’s only common business logic, I would contend.

When a business tries to recruit talent, it generally tries to offer better terms than what those employees are already receiving and the US — for all its problems —generally offers a high standard of living. I know, I’m mercenary.

If we’re looking to not just maintain existing levels of aliyah but also scale them up, then that quid pro quo needs to be one more compelling than “come to live in Israel and fulfill the Zionist dream.”

Generations of immigrants have been attracted here by the same marketing line only to have their hopes and Zionism dashed by some of the dynamics they have encountered after answering that call.

Fortunately, there are some great ways for Israel to actually do just that. Here are a few of them. 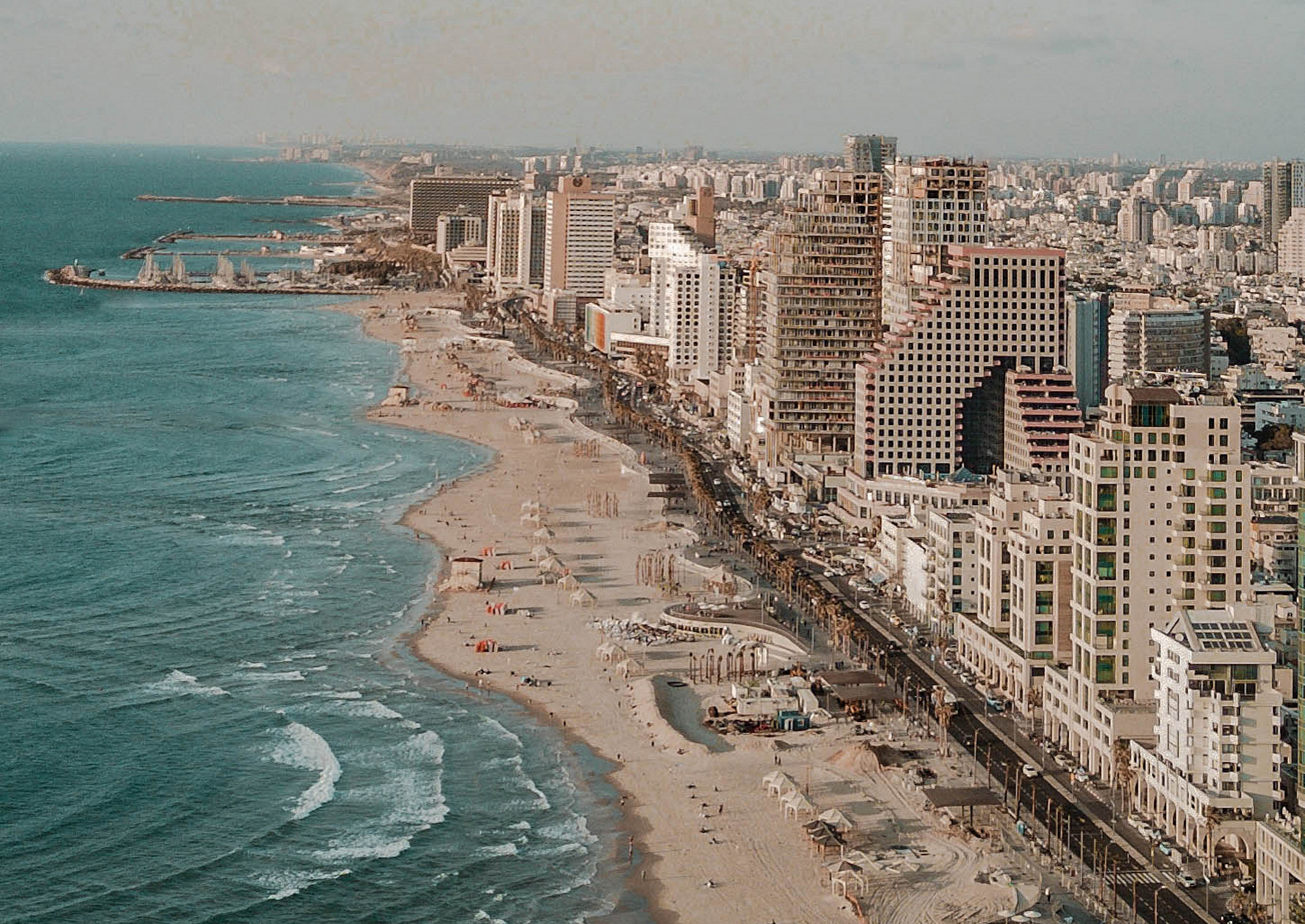 David Horowitz, who edits this website, recently cited me as an example of a tragic oleh (should I print new business cards?).

I have been gainfully employed for the majority of my time in Israel. I left a relatively prosperous life in Ireland, voluntarily, to live here. I met my spouse in Israel and got married at a venue in Jerusalem overlooking the Old City. For the majority of my career in Israel, my salary has met or exceeded the national average.

In some respects, it sounds like the prototypical aliyah story that Bennett is trying to replicate.

And yet in a property market in which the average downpayment required for a mortgage now stands at more than a quarter of a million dollars (for an apartment), I can’t think of any clear path for me to accrue enough capital to quality for a mortgage. That doesn’t mean I’m poor. It just means that I’m not spectacularly wealthy for a 32 year old. Who else would be in a position to have those kind of savings on hand? (For those unfamiliar with the bitter state of the housing crisis here, Ricky Ben-David’s piece in this publication, which is where the above link directs to, is well worth a read.)

This isn’t me being pessimistic or defeatist. This is realism and rejecting toxic positivity. There are hundreds of thousands of olim like me living in Israel. Unlike me, they probably don’t like sharing personal thoughts on Medium. And so you won’t hear that much from them online. But they exist. And if you can find them, they’re vocal.

Ben-David’s article provided many worthwhile starting points for the government to explore — although (and I’m sorry to be pessimistic again) — I’ve yet to see evidence that their commitment to aliyah in words is matched by much in the way of action.

If it were, the country’s only home ownership incentive scheme would not be a miserly 20% discount in peripheral and economically less-desirable parts of the country.

For one, Israel should break the KKL’s ludicrous monopoly on the supply of land for development in Israel.

The land of the State of Israel belongs to the Jewish people and not to a government-sanctioned monopoly that benefits only developers and those already well-off (unsurprisingly, Israel now has one of the highest rates of income inequality in the world as measured by the Geni coefficient).

Second idea: begin taxing through the teeth foreign Jews who are driving the real estate market ever-northward (it’s time we stopped calling it a bubble).

Yes, this will mean turning away a lucrative source of capital for developers and banks.  It will also mean making Israel far more liveable for those who have upended lives to already be here.

We need nothing less than a new social contract in Israel. One in which those living here come first. If you want to get in on the real estate boom, you should be prepared to back Zionism with your life. A tough offer? Unpalatable for Parisian millionaires? Undoubtedly. But the alternative threatens the viability of the ideology also.

These are plenty of good jobs in Israel alongside some that pay well and others that pay very well.

Unfortunately, immigrant exploitation has been a longstanding complaint for those living here. French immigrants, in particular, have complained about unwieldy bureaucracy standing in the way of them having their foreign-earned credentials recognized in Israel. Exhausted, frustrated, and embittered many have returned home vowing never to step foot in this country again.

The corollary is obvious but bears frequent repetition nonetheless: the vast majority of Israelis — olim and otherwise -—are not employed in “high tech.”

In return for this push for more immigrants, Israel needs to do more to support olim through their journey towards what appears to be the only part of the economy capable of providing salaries good enough to meet the cost of living in one of the most expensive localities on this planet.

Sanctions need to be created and enforced targeting companies who fail to inform immigrants of their rights from the entrance interview through to the time they leave the company.

Above all, empathy needs to be afforded towards the plight of olim who finds themselves in a country in which they are no longer native speakers trying to simultaneously forge ahead with their career, make friends, and figure out everything else required to live in Israel.

During the course of my six years in Israel, I have encountered pension contributions that were mysteriously never paid from companies who bragged, on Facebook, about how much they loved workers and the “family” environment they had created. Among other things that would be too risky to publish. My story is far from unique. It’s everyday.

Walking around Israel today, you may be flabbergasted by the number of stray cats in the country.

Urban legend has it that things weren’t always so.

Apparently in a kind of guerilla effort to curb the (then) rat problem in the country, the (then) British governors of Israel imported cats en masse.

The rat epidemic was brought under control.

More modern methods for this kind of thing were invented.

And yet the cats remained.

Hanging out in dumpsters. Being all cat-like. And spawning some great memes about how while foreigners imagine living in Israel to avoid dodging rockets, for those of us living here it just as often feels like dodging stray cats.

Israel’s approach to olim has been very similar.

The country invests tremendous resources on what can only realistically be likened to  state-funded propaganda encouraging Jews around the world to come to Israel.

Statesmen like Prime Minister Bennett laud the value of aliyah and encourage Jews to uproot their lives to gain citizenship. Netanyahu has dubiously used anti-Semitic attacks as springboards from which to state the same case.

And yet far too often when those immigrants do precisely that they feel very much like North Korean exiles who returned to their land of birth by state propaganda only to find a miserable wilderness in place of the lush plains that were described (note: I’m not comparing the severity of these two situations, only trying to point out some commonalities).

Too often, new immigrants to Israel find themselves at the mercy of exploitative employers. And landlords. (One of my former ones ripped out the toilet in my apartment while I lived there. I never received redress).

Although I may sound bitter (in some respects I am), I continue to support aliyah.

I proudly espouse the belief that during the first time in more than two thousand years when Jews have self-determination, this is the only place in the world in which they should live.

Nevertheless, I think it’s beyond time that Israel thought pragmatically about aliyah. The ideological diehards who will endure decades of under-employment, exploitation and endless renting solely to live in this country are likely grossly outnumbered by the ranks of those who will call it quits after they see the writing on the wall.

Israel needs a new social contract which puts the interests of its own citizens above those of the Jewish Diaspora which has traditionally provided a financial bedrock for the country.

Israel is no longer the poor state it was after the time of its formation. It’s time to put Israelis first. Including those yet to arrive.