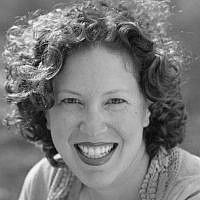 The Blogs
Noa Hirsch Choritz
Apply for a Blog
Please note that the posts on The Blogs are contributed by third parties. The opinions, facts and any media content in them are presented solely by the authors, and neither The Times of Israel nor its partners assume any responsibility for them. Please contact us in case of abuse. In case of abuse,
Report this post. 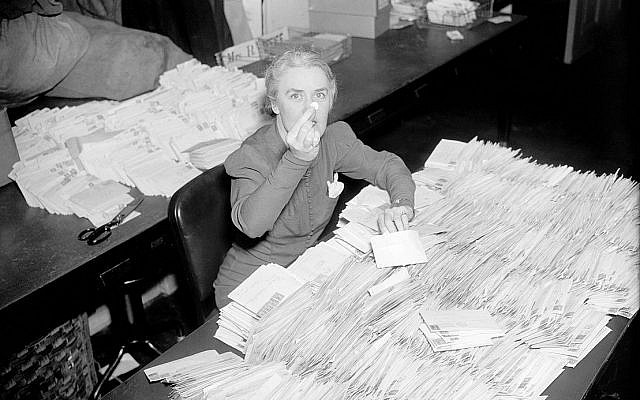 Missy (Margaret) LeHand, secretary to President Franklin D. Roosevelt, with the morning mail arriving at the White House in response to an appeal to donate dimes to fight infantile paralysis as a way of celebrating the president's birthday — the first March of Dimes campaign, Washington, DC, January 28, 1938. (Harris & Ewing, Library of Congress, Wikipedia)

Growing up as a child in Pittsburgh, my hero was Dr. Jonas Salk, the legendary creator of the polio vaccine. Throughout the 1930s-50s polio outbreaks would occur in pockets throughout the country, striking fear in the hearts of parents. By 1952, the worst year of the epidemic, polio was the most feared disease in America. As the weather warmed up each year, panic over polio intensified. Late summer was dubbed “polio season.” Public swimming pools were shut down. Movie theaters urged patrons not to sit too close together to avoid spreading the disease. My mother remembers her mother making them stay inside during the summers to avoid catching polio.

President Franklin D. Roosevelt, himself partially paralyzed by polio, is credited with creating the March of Dimes in 1938, a charity drive to fund the race for a polio vaccine. The idea was simple. If every person donated just a dime (in today’s value, equivalent to $1.84) enough money would be raised to fund scientists working on a polio cure. Funds were raised and a call was put to the world of science.

Dr. Jonas Salk, working out of the University of Pittsburgh and already a successful creator of a flu vaccine (still in use today), answered the call. He toiled for years, and after initially testing the vaccine on the schoolchildren of Pittsburgh (at the elementary school local to my home) and later a 2-million person study, in 1955, the vaccine was declared safe and effective. In an interview with the legendary Edward R. Murrow that same day, he was asked, “To whom does the patent on this vaccine belong?” and Dr. Salk gave his incredible answer. “It belongs to the people, I would say. I mean, could you patent the sun?”

Flash forward 65 years. The year is 2020. Once again, a virus has taken over our lives, and it is causing fear, economic disaster, and deaths and suffering. 3,000 deaths, the number of deaths in polio’s worst year, is so far in our rear-view mirror, as to be irrelevant. As of this writing, the United States alone is hovering near 200,000 deaths.

What would FDR do?

Instead of a nation rallying together to raise the funds to stop this disease and give us back our lives, we fight and blame each other. In the country of my birth, mask-wearing is a polarizing, politicized activity. In the shadow of elections, concern for human health and human lives has become just another topic to divide the Left and the Right.

In the country I call home, Israel, our politicians deliberately ignore salient medical advice by qualified professionals, in order to remain in political power. We give the people what they want, and not what they need. When this fails, our politicians blame whichever poor unlucky soul is currently the “coronavirus czar,” a laughable term for a medical professional without an ounce of power. We blame the Haredim, who blame the leftists, and we have 5,000-person weddings and 10,000-person protests.

So why is there no public health campaign to explain very basic virology, hygiene, even economics to the public? Who loses when the public is well-educated?

Our politicians on both sides of the Atlantic have benefited and continue to thrive on polarizing the people. By making what divides us our definitive qualities and thoughts, we created a highly fractioned society. Morals can no longer guide us, only politics. In Israel, we went through three, yes three, rounds of elections, and our prime minister is held hostage by minority groups without whom he would lose his seat, and his judiciary immunity.

We do not need to allow our politicians thirst for power keep us in the dark. We can create our own 2020 version of The March of Dimes. Our own grassroots movement to create buy-in, to make the public understand that relying on governmental policies will not keep us safe, it won’t restore our economy, and it won’t give us back our summers.

We are being deliberately kept in the dark. The rules change on a whim, and worse, there is no explanation. As part of my professional capacity, I help my company navigate coronavirus quandaries, and I have spent the summer months consulting for many other companies. On an average day, I receive 30-plus requests for help to navigate the questions of: “Do I need to quarantine?” and “Should I get tested?” from my social and professional network. These are people who would like to follow the rules, but cannot figure out how, because the guidelines are so unclear, by design it would seem. We, as a nation, have utterly failed to create and explain guidelines.

Israel’s latest decision, to once again lock down the public (by this point necessary to prevent the medical establishment from utterly collapsing), once again comes without any acknowledgement of the cost of such measures to all but 120 of its citizens. Compare this to a country such as Germany, which also locked down in March, but instituted an economic freeze whereby all rent, mortgage, loan, and utility payments were frozen until 2022, and the government immediately deposited money into each citizen’s account to cover food and medicines for the next few months. Incidentally “The Big Freeze” is an economic COVID-19 plan designed by an Israeli economist named Sarah Nadav and publicized by the World Economic Forum. Guess who ignored it? Israel.

One of the most powerful visual images that has kept me sane these months are the videos of the school children of America streaming out into the sun in 1955, splashing in their pools, enjoying each other’s company and safe from the fear of polio, thanks to a vaccine created by Dr. Jonas Salk.

I am grateful to my local leadership, who have accepted my offer to allow myself and other medical professionals into our local schools to provide some public health education. We are creating our own March of Dimes, by using the best ambassadors for public health policy initiatives — the children. Our hope is that by explaining COVID-19, masks, and mutual responsibility to the people who aren’t allowed to participate in politics, we can help create the buy-in needed to give our children back the world they once knew. Among those children? My son Yonah, named in part in honor of Dr. Jonas Salk, the scientist who gave the children back their summers.

About the Author
Noa Hirsch Choritz is an emergency and OBGYN nurse, and the regional director of Terem Emergency Medical clinics. She is currently completing an MBA in biomed at Hebrew University.
Related Topics
Related Posts
Comments