When Saudi Crown Prince Mohammed bin Salman (also referred to as MBS) had Saudi journalist Jamal Khashoggi murdered and immediately dismembered for easy disposal in 2018, many accused President Trump of doing nothing about it.

The accusation is buttressed by the fact that there has been no  objective or comprehensive Saudi or American accounting of what occurred, let alone identifying any real accountability.

On the contrary, Trump did a lot. In typical Trump fashion, he threw American intelligence under the bus when he stood by Saudi Arabia despite the CIA reportedly concluding that MBS ordered the killing of journalist Jamal Khashoggi.

Trump once condemned Saudi leaders for perpetrating “the worst cover-up in history”  also said “Whoever thought of that idea, I think is in big trouble. And they should be in big trouble.”

Trump never meant any of this, and later praised Saudi Arabia as a “truly spectacular ally,” even after the C.I.A. concluded that MBS, the kingdom’s de facto leader, ordered the murder.

Following the uproar over Khashoggi’s disappearance, Trump tweeted that he had “no financial interests in Saudi Arabia.”

After intelligence officials concluded last year that MBS had ordered Khashoggi’s killing, Trump issued a statement that his administration was “standing by Saudi Arabia” for strategic reasons because it had agreed to invest “a record amount of money” in the United States.

When a Saudi national committed mass murder at Pensacola Naval Air Station, a number of Republicans called it an act of terror. But not the President.

On the contrary, all he did was cover up for the Saudis, repeatedly telling the American people how bad the Saudis feel about it.

“They are devastated in Saudi Arabia,” Trump told reporters Saturday, unprompted. “And the king will be involved in taking care of families and loved ones. He feels very strongly. He’s very, very devastated by what happened and what took place. Likewise, the crown prince.

They are devastated by what took place in Pensacola.”Trump, who is usually Johnny-on-the-spot labeling shootings by foreigners from Muslim-majority countries as terrorism, has yet to refer to this act of terrorism as terrorism.

That Trump has never spoken about human rights in Saudi Arabia should surprise nobody.

Remember Trump’s tweet asserting that he has no financial interests in Saudi Arabia?

That’s factual. But it is also an example of one of Trump’s favorite ways to lie, because it used a fact to deceive.

It’s known as the lie by omission. When one has an agenda, he will omit facts germane to the subject but undermine his message.

In this instance, Trump wanted to keep the public from knowing how much the Saudis own our president. Because Trump has no higher priority than himself the lie by omission is “The Saudis have no financial hold on me.”

In this instance, nothing could be further from the truth.  It’s true that the Trump Organization does not own any buildings in Saudi Arabia, but Trump has worked closely with officials from the country. Trump has been paid tens of millions by Saudi investors and its government through a variety of business deals. 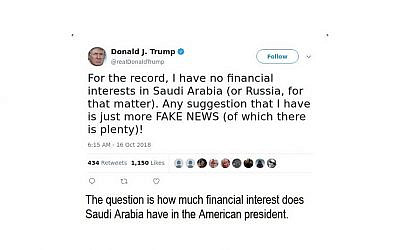 In fact, Trump has done business with the Saudis for nearly 30 years.

Alwaleed bin-Talal, a member of the royal family purchased the 282-foot yacht “Princess” for $20 million in 1991 after the boat was repossessed from Trump (Trump was about to declare bankruptcy at the time)  He was also part of a group that purchased the financially troubled Plaza Hotel for $325 million in 1995.

In 2016, the New York Daily News reported that in 2001 the Saudi government also purchased the entire 45th floor of Trump Tower, for $4.5 million. Given annual fee fares for the building at the time, Trump also was paid $5.7 million by the Saudis between the purchase and 2016, the paper reported.

And if there was any doubt, Trump himself bragged about his dealings with the Saudis during a 2015 campaign rally in Mobile, Alabama.

The most recent example came last year, as The Washington Post reported in August that a visit from Saudi officials to Trump’s Trump International Hotel in New York City helped boost the hotel’s quarterly revenue by 13 percent in 2018’s first quarter.

The bump came after two straight years of booking declines for the property, according to a letter obtained by the Post in which the manager of the Trump hotel cited “a last-minute visit to New York by the Crown Prince of Saudi Arabia.”

In addition, a lobbying firm connected to the Saudi government also paid $270,000 to the Trump International Hotel in Washington, DC, between October 2016 and March 2017.

As for the Pensacola fatalities, Sailor Kaleb Watson was so driven that, at only 23 years old, he had already bought a house in the area. Mohammed Haitham, 19, had just traveled back to his home down the coast to watch his kid brother play high school football. Cameron Walters, 21, graduated from boot camp just a week and a half before he was murdered.\

Any other president would have responded to these Saudi murders as if the security of the United States was a top priority.This administration’s position on Saudi Arabia was etched in stone before Donald Trump won the nomination:  “I get along great with all of them; they buy apartments from me. “They spend $40 million, $50 million. Am I supposed to dislike them? I like them very much!”